BHP Billiton Ltd. announced first-half profit surging 31% over guidance as iron ore earnings beat costs amid rallying global economic growth. The Melbourne, Australia-based titan is the world’s largest, and one of its most diversified mining companies.

Underlying profit, said officials in a statement, rose to $7.8 billion in the six months up to December 31, a hike from $5.9 billion year-on-year. This surpassed a median forcast of nearly $7 billion by independent analysts; total iron ore earnings, moreover, gained $1.7 billion to $6.5 billion.

BHP, which predicts more cost savings, anticipates the world economy will strengthen this year, buffeted by positive outlooks in the U.S. and Japan. BHP’s profit increased after spending cuts emphasizing iron ore and copper — its most profitable operations.

BHP was decidedly upbeat. “Global economic conditions improved,” the company said in a statement. “The balance of risk is skewed to the upside — particularly given broad-based indicators in the major developed economies.”

Overall, global miners are cutting costs after a metal price boom throughout the 2000s fell when producers boosted supply and China’s economy began to cool down. BHP now focuses on its highest-yield projects in 2014, with plans to invest $16 billion in new projects and exploration — down from $22 billion in 2013.

After petroleum, iron ore represented BHP’s biggest earner. Steelmaking material prices climbed 15% in the second half of last year, meanwhile, as China boosted stockpiles to the highest in more than a year. China, the world’s most populous nation with its 1.3 billion inhabitants, is also its largest consumer of raw steel. 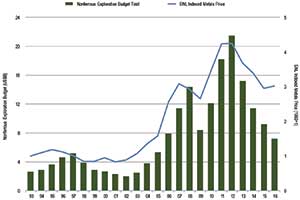