As of August 1, the Cascavel gravity processing plant was running on a 24-hour basis, while continuing to process stockpiles of low-grade development material. Orinoco anticipated that high-grade parcels of ore from production stopes would be processed and assayed over the next few weeks as the plant ramped up to design capacity. 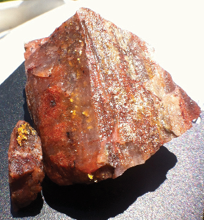 Gekko Systems designed the Cascavel processing circuit and is providing Orinoco with technical support during initial plant operations. The circuit includes primary, secondary, and tertiary crushing along with primary, scavenging and cleaning gravity circuits. Because the gold is both free-milling and coarse, no leaching is required. Orinoco is smelting the concentrate on site to produce doré bars before having the gold refined in Brazil.

The Cascavel project is mining high-grade, structurally controlled coarse gold shoots, where underground sampling has returned intercepts of up to 15 m grading 88 g/mt gold. While the coarse nature of the gold offers many advantages in terms of low-cost processing and recovery, Orinoco has found that it makes resource estimation within the JORC code very difficult. Drilling provides an effective measure of geological continuity but is not particularly useful for grade estimation in such a high-grade, coarse gold system. As a result, Orinoco has not quoted a JORC mineral resource nor a production target for the mine.

The Cascavel mine is located on the 200-km2 land package of Orinoco’s Faina Goldfields project, which also hosts the Sertão and Tinteiro deposits and numerous advanced exploration targets. Once production is ramped up at Cascavel, Orinoco will expand mining operations to include additional mineralization from Cascavel as well as mineralisation from Sertão, which is located on the same shear zone approximately 18 km from Cascavel. Orinoco already has a mining lease for Sertão.

Exploration at the Tinteiro polymetallic prospect is ongoing and has demonstrated the potential for a large iron ore-copper-gold (IOCG) system.