Total gold production over a 22-year mine life is estimated to be 4.359 million oz, averaging 256,800 oz/y for the first 10 full years (2015 to 2024). Ore production will begin from an open-pit in 2014 at an average production rate of 8,000 mt/d for the first five years. Production from underground mining will begin in 2019 and will gradually replace open-pit feed.

Capital costs to the beginning of open-pit production are estimated at $525 million. Capital spending from 2014 to 2019 to develop the underground mine is estimated at $465 million. Operating cash costs over the life of the project are projected to average $522/oz. Total operating costs (with royalty) are anticipated to average $626/oz.

The Aurora project has proven and probable reserves of 4.6 million oz of contained gold. The feasibility study was based on 291,556 m of core drilling in 939 holes drilled between 2004 and May 2011. Drilling has been ongoing since May 2011, and Guyana Gold expects to issue a revised resource calculation in late 2012.

The Aurora ore is free-milling, allowing a flowsheet using conventional gold processing techniques. The only metal to be recovered is gold and recovery is excellent at a grind size of 80% passing 75 μ.

Testwork has shown that approximately 30% of the gold can be recovered in the gravity circuit. The remaining gold in the ore will be leached in cyanide followed by carbon-in-leach (CIL) gold recovery. 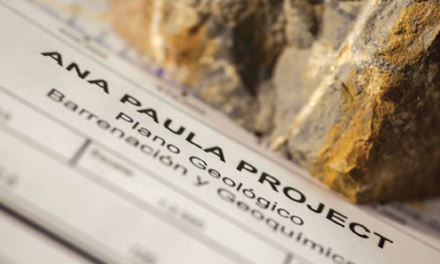