Coeur Mining has announced an updated and re-scoped mine plan and preliminary economic assessment for its Palmarejo silver and gold operations in southwestern Chihuahua state, Mexico. Under the new plan, mining will transition to a lower-tonnage, higher-grade, higher-margin, all-underground operation, prioritizing cash flow over production ounces.

The Guadalupe underground mine is expected to become Palmarejo’s primary ore source by 2016. Mine life at the Palmarejo open-pit will be extended through mid-2015 based on current metals prices and known reserves. Ongoing exploration is expected to identify new resources and to continue converting a significant portion of existing resources into reserves.

Surface operations will give way to the Guadalupe underground mine as Palmarejo’s primary ore source by 2016.

Coeur President and CEO Mitchell J. Krebs said, “This updated outlook for Palmarejo is based on year-end 2013 reserves and resources that we believe are economic based on prices of $20/oz for silver and $1,300/oz for gold. It demonstrates our commitment to prioritizing higher-quality, higher-margin ounces versus seeking to maximize the quantity of production ounces.

“It also demonstrates the significance of Guadalupe to Palmarejo’s future, which is why our recent decision to place Guadalupe into production next year was so important. In addition, the modified economics of the recently announced new gold stream agreement with Franco-Nevada will help boost Palmarejo’s future cash flow profile.”

The new gold stream agreement letter of intent announced June 23 provides that Franco-Nevada will contribute $22 million toward the capital investment at Guadalupe, which will be funded in five quarterly installments beginning in the first quarter of 2015.

The new mine plan calls for mining of 2.5 million short tons (st) at Guadalupe underground through 2019 at an average mining rate of 1,500 st/d and grades of 4.7 oz/st silver and 0.08 oz/st gold. Pre-production capital expenditures are estimated at $19 million and total capital expenditures are estimated at $85 million. The new mine plan includes estimated inferred mineral resources that Coeur expects to be able to upgrade to reserves through a $24 million drilling program over the next six years.

While the new mine plan contemplates mining a higher-grade subset of the resources during the current price environment, it does not sterilize any existing reserves or resources, which are expected to be mined at some point in the future.

Overland Pipeline Completion is a Milestone for Sierra Gorda Startup 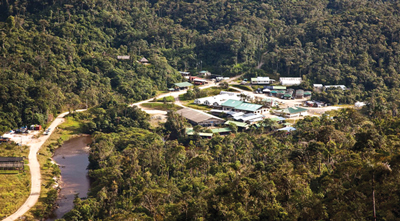