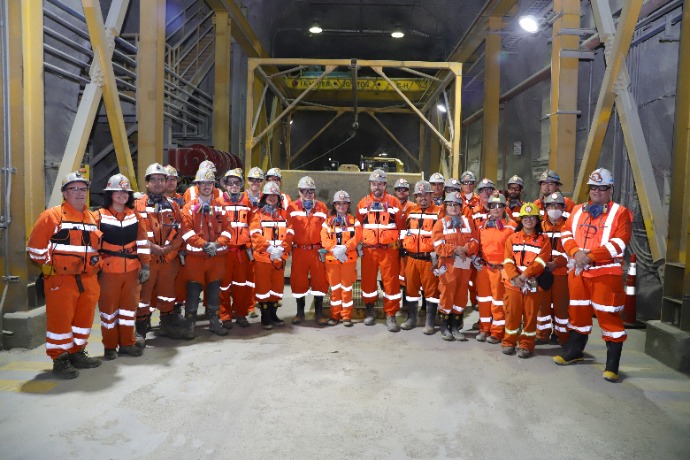 Chile’s national copper mining company Codelco is testing battery-electric LHDs, and hoping to  eliminate the consumption of 160,000 liters per year of diesel, which translates into 433 fewer tons of greenhouse gases (GHG) released into the atmosphere.

With a 14-ton payload capacity and the same functionalities as the conventional versions (diesel), Codelco is testing a battery-electric Epiroc LHD at the Diablo Regimiento underground mine, which is part of the company’s El Teniente Division. The one-year pilot program will validate the machine’s power, functionality and energy consumption.

The milestone was commemorated by the Chilean Minister of Mining, Marcela Hernando; the executive president of Codelco, André Sougarret; the vice president of the Sustainability Committee of the board of directors, Nelson Cáceres; the Vice President of Sustainability and Corporate Affairs, and other dignitaries.

“Mining has always been at the forefront of technology,” Minister Hernando said. “We are immersed in a climate crisis and we are one of the few countries that has the mineral wealth (i.e., copper and lithium) to combat it.”

In addition to reducing direct greenhouse gas (GHG) emissions by 100%, its maintenance cost is 60% lower, and the working conditions it generates are highly valued by the teams in charge.

“Starting with the first training sessions for the pilot test, I noticed the difference in terms of quality of life. It is not necessary to use hearing protection, because the noise levels are minimal. In addition, the transfer is smoother, there are almost no vibrations compared to diesel powered machines,” said Miguel Ángel Madrid, who has been operating LHDs for 12 years.

“It is important to consider these developments  for underground mining,” Sougarret said. “Battery-electric machines are a reality and they are here to stay at Codelco. One of our 2030 commitments is to reduce our carbon footprint by 70%. An important aspect for achieving this goal is to electrify our mining fleets, and not only those of underground mines, we must also incorporate solutions for open pit as our suppliers develop new technologies.”

The executive also revealed that the manufacturing process of this equipment is “very virtuous for copper mining since it contributes to the necessary decarbonization of this industry. Electromobility, one of the ways to combat climate change, is a copper-intensive technology. The electric LHD, for example, requires 900 kilos of ore; a conventional one only needs 120 kilos,” he said.