Iron Mining Group reported its subsidiary, Chile Inversiones de Minerales, has signed an Investment Letter of Intent which outlines the acquisition of 70% of an existing iron sands reserve development project, known as the La Serena Beach Reserve, in Chile’s Fourth Region, Coquimbo. As part of the LoI, the company said it would take control of two new development concessions allowing for the construction of port facilities adjacent to the La Serena Beach Reserve property.

Based on studies conducted last year by a Chilean university, CIM said the 2-km by 0.5-km property is believed to contain two interrelated iron ore deposits; approximately 5 million mt of recoverable high-grade iron ore located on the beach and an additional estimated 75 million mt located on the ocean floor.

Through this transaction, CIM will acquire mineral exploitation concessions and all rights to a pending marine concession. The mineral concessions grant CIM the right to begin mining iron ore along the shoreline, pending final environmental approval, while the corresponding marine concession will allow CIM access to iron sands deposits on the ocean floor, thereby achieving increased production volumes. Upon completing this transaction, CIM will commence iron ore processing operations on this site with initial scheduled monthly delivery of up to 200,000 mt of iron ore against existing Chinese purchase contracts beginning in first quarter 2011.

According to the company, ocean currents which are responsible for transporting the marine floor deposits onto the sandy shoreline, allow CIM to utilize a process known as Regenerative Trench Mining (RTM), to extract the minerals located on the ocean floor prior to obtaining a final marine concession. The RTM process consists of digging trenches parallel to the ocean during low tide so when high tide returns, the trenches will be filled with fresh iron sands carried by the currents and ready for extraction the following day. This RTM process offers a temporary solution for accessing the marine floor iron ore deposits.

The company said it is committed to ongoing infrastructure investment with the goal of developing the acquired port development concessions into ports capable of loading up to 900,000 mt/month. “The acquisition of the La Serena Beach Reserve in the Coquimbo Region positions Iron Mining Group to begin 2011 [by] producing iron ore from mines in three different regions of Chile,” said CEO Garrett K. Krause. 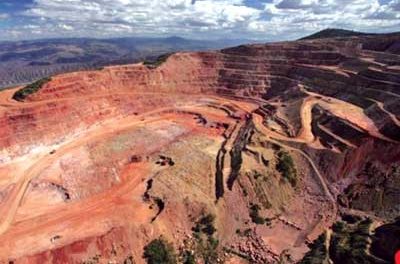 Goldcorp Prevails in Bidding for Canplats