More than 10,000 people visited the International Mining Hall (MMH) held in October in Seville, Spain. In its third year, the conference brought together people from the Andalusia region as well as around the world in the hopes of establishing partnerships and courting investment and bringing jobs to the region.

“I hope this will be an historical event,” MMH Commissioner and CEO of Atlantic Copper Javier Targhetta said. “This sector is about to become a world reference.”

The Andalusia region has a long history of mining, dating back to around 3,500 BC when they mined for copper. Most of the metal mining is done between the provinces of Seville and Huelva in what is known as the Iberian Pyrite Belt.

The area is attempting a resurgence following the worst environmental disaster in Spain in 1998 when a large tailings dam from the Los Frailes mine ruptured sending 5 million cubic meters of sludge into the Agrio and Guadimar rivers. Cleanup took three years and the government granted the concession to mine again at Aznalcollar in 2015.

Andalusia leads Spain in metals production, with more than 90%, according to the Secretary General of the Energy Industry for the government of Andalusia Natalia Gonzalez Hereza. The industry contributes to 40% of the GDP for the area, which was only 25% in 2017, she said. “It’s a spectacular growth,” she added.

But there is more to do, she said. The government must focus on simplification, by removing the layers that have been added to the Mining Law of 1976 over the years. “We have made this law complicated,” she said.

She added that the public and private sectors must work together and build partnerships. That “is key for the framework.”

Visitors to the conference could attend numerous technical sessions and conferences with more than 70 speakers. Some of those sessions included policies and investments in the Andalusia region, specifically. Elvira Saint-Gerons Herrera, director of strategic investments for the Agency of Innovation and Development of Andalusia, said there are numerous advantages to mining in the region, besides being on the Iberian Pyrite Belt. She highlighted its geographical location, infrastructure, such as the Port of Huelva, quality of life and quality of people.

Apart from the scientific program, MMH was also the backdrop for 120 business meetings between Andalusian companies and nine representatives from companies in four other countries. They presented their products and services as part of a trade mission organized by the Regional Department of Presidency, Public Administration and Home Affairs through Extenda, Andalusian Agency for Foreign Trade Promotion.

The MMH ended with a panel featuring the regional government’s ministers of Finance, Industry and Energy, and Knowledge, Enterprise and University, Juan Bravo and Rogelio Velasco, respectively; the president of OMEL, the Spanish electricity market, Carmen Becerril; and  the president of CEA (Andalusia’s Business Confederation), Javier González de Lara.

The MMH commissioner pointed out the effort and hard work of both the Seville Conference and Exhibition Centre (FIBES) and the Association of Research, Extraction, Mining-Metallurgic Transformation and Service Companies (Aminer), in organizing the third hall, which he said broke its records both for visitors and attendants, with more than 900, almost three times the number of the previous edition.

Targhetta said Seville can become “the great international capital city of mining,” and a reference for future meetings of Mining and Minerals Hall.

An awards ceremony was also held at the event to pay tribute to professionals with extensive careers in the mining sector. It honored Dolores Norte, Alberto Lavandeira and Juan José Cerezuela.

Norte became the first woman mining engineer in Spain back in 1974. She has developed a long professional as well as academic career since then. She has held numerous management positions at Técnicas Reunidas S.A. She has also been secretary of the governing board of the Colegio de Ingenieros de Minas del Centro (Mining Engineering Association of Central Spain) and a member of the Quality Committee of the Instituto de la Ingeniería de España (Spanish Engineering Institute).

Lavandeira, CEO of Atalaya Mining since 2014, boasts more than 38 years of experience in the sector at national and international level. After graduating at Oviedo Mining School, he worked in the Spanish subsidiaries of Rio Tinto Plc., Anglo American and Cominco. Later, he managed Rio Narcea Gold Mines, Agua-blanca (nickel) and El Valle-Boinás (gold). He then led the Mutanda Mine (copper and cobalt) in the Democratic Republic of the Congo with Sanref Overseas S.A.

José Cerezuela is a mining engineer. Among the many responsibilities he has held throughout his career, was as director general of mining in 1986, president of FIPAE, SUSCHEM in 2009 and president of CONFENDEM. 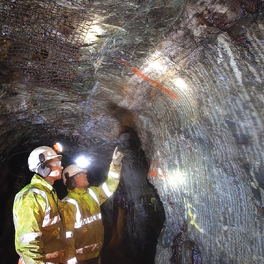