The Western Australia government has released a “master plan” detailing plans for Anketell Port, a major, multiuser, multicommodity, deep-water port in the Pilbara. The key driver for the port is the ongoing demand to export iron ore from the Pilbara region. A further key driver is the unprecedented level of economic development in the Pilbara over the last decade.

Fortescue Metals Group will pay a Chinese shipbuilder $275 million for construction of four very large iron ore carriers, which, when completed, will account for roughly 6% of FMG’s fleet requirements. (Photo courtesy of FMG)

The master plan includes provisions for a substantial infrastructure corridor and more than 800 ha of industrial land to support port activities and future mining operations. Initial environmental approvals for the site are in place, a native title agreement has been signed, and an Aboriginal heritage survey is currently under way.

The Anketell Port site is on the West Pilbara coast 30 km east of Karratha. At full development, the port is expected to have capacity of about 350 million metric tons per year (mt/y), around 20% more than the total shipments through Port Hedland in 2012-2013.

However, the port is planned to be built in stages over several decades. The actual stage 1 capacity and configuration will be decided by the port builder/user, subject to a minimum capacity of about 25 million mt/y.

Anketell Port will be developed and funded by private sector builders/users, and managed by a port area manager. Three iron ore companies, Australian Premium Iron, Fortescue Metals Group, and China Metallurgical Group Corp., have independently selected Anketell as the preferred location for their export facilities. The state government will work with these companies to develop the port to meet their requirements, with plans to commence operations by 2015. 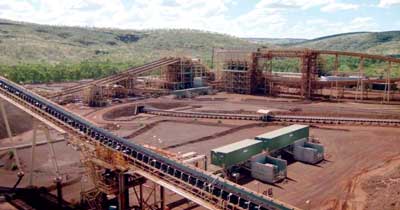