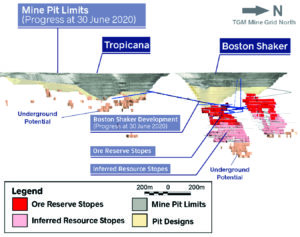 The Boston Shaker underground mine is designed to produce 1.1 million mt/y of ore.

IGO Ltd., in conjunction with AngloGold Ashanti Australia, announced that commercial production has been declared at the Boston Shaker underground mine, the first underground mine at the Tropicana Operation (Tropicana).

The development and commissioning of the Boston Shaker underground mine has been completed on time, below budget and importantly, with no recordable safety incidents. The first production stope was fired in June, and the underground mining has now reached an annualized rate of 700,000 metric tons per year (mt/y). Ramp up to reach the design production rate of 1.1 million mt/y is expected to be achieved by March 2021. Commercial production was delivered in line with projections and below the A$105 million capital cost estimated by the February 2019 feasibility study.

The Boston Shaker underground mine is designed to mine approximately 1.1 million mt/y of ore at an estimated grade of 3.5 g/mt gold and is expected to contribute approximately 100,000 ounces of gold production per year (oz/y) once fully ramped up.

Based on current understanding, the Boston Shaker Underground Mine life is estimated to be seven years. The mineralized down-plunge depth extensions are planned for drill testing in fiscal year 2021 once underground drill platforms are established.

“Unlocking value at Tropicana has remained a key focus for the joint venture throughout Tropicana’s long and successful history,” IGO Managing Director and CEO Peter Bradford said. “We are confident that the success achieved at Boston Shaker will serve as a template for the potential development of additional underground mines at Tropicana over the coming years.”
The company said development of an underground drill drive from the Boston Shaker Decline is well advanced with a total of 240 meters completed to date. Underground diamond drilling is scheduled for the December quarter with a decision to mine expected during 2021.