Doray Minerals began commissioning the 480,000-metric-ton-per-year (mt/y) processing plant at its 100% owned Deflector gold project in the southern Murchison region of Western Australia in early April, with expectations that commissioning would be complete by the end of May and that production would begin in June.

Flotation section of the Deflector mill during construction of the 480,000-mt/y facility. (Photo: Doray Minerals)

Doray said the Deflector project is a high-grade/low-cost project with an initial mine life of six years, substantial copper byproduct credits, and significant exploration upside. Mill throughput will average 454,000 mt/y at life-of-mine head grades of 4.8 g/mt gold and 0.7% copper. Life-of-mine metals production is estimated at 355,452 ounces (oz) of gold and 14,279 mt of copper.

The flowsheet includes three-stage crushing and screening, ball milling, a gravity circuit, an elution circuit and gold room, and a flotation circuit that will produce a copper-gold concentrate. Recoveries are expected to average 89.5% for gold and 93% for copper from primary ore, which will account for 82% of total plant feed.

GR Engineering Services was the engineering, procurement and construction contractor.

Deflector development is based on a shallow, narrow-vein deposit that will be mined predominately by underground methods. The ore is located in three separate lodes: West, Central and Contact. Mining is initially based on open-pit methods but will transition to underground toward the end of the first year.

The Western and Central lodes are steep mineralized structures dipping between 80° and 90°, typically 1 m to 5 m wide, and hosted in competent basalt. The total strike length of the orebody is about 850 m. Underground access will be gained through a portal established in the Central lode pit at a depth of 35 m below surface. Mining of the wider West lode pit and a smaller northern pit on the Central lode will continue to a maximum depth of 85 m, concurrent with underground mining.

The Deflector mine will be Doray Minerals’ second mine in Western Australia. Its Andy Well mine produced its first gold August 2013 and produced 47,197 oz in the six months to December 31, 2015. Doray is forecasting that when Deflector reaches full production combined production from the two mines will total about 140,000 oz/y at an all-in sustaining cost of under A$1,000/oz after byproduct credits.

OZ Minerals Spending A$60 million at Carrapateena in 2012 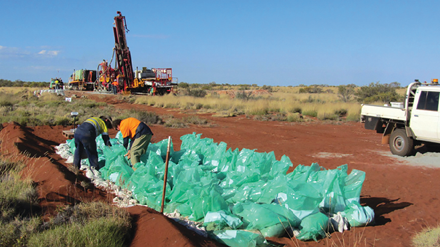