Kinross Gold announced the start of commercial production at its Dvoinoye high-grade underground gold mine in the Chukotka region of Russia’s Far East on October 9. Dvoinoye is located approximately 100 km north of Kinross’ Kupol mine, and the Dvoinoye ore will be processed at the Kupol mill, providing additional, low-cost production. The project is expected to have a mine life of seven years.

At peak production, Dvoinoye is scheduled to produce 1,000 metric tons (mt) per day of ore, which will be transported to Kupol via an all-season road. Processing capacity at the Kupol mill has been expanded from 3,500 to 4,500 mt/d to accommodate the Dvoinoye ore.

Dvoinoye is expected to produce between 235,000 and 300,000 gold equivalent oz/y during its first three full years of production, which will be incremental to gold production from the Kupol underground mine. The cost of sales for the combined Russian operations between 2014 and 2016 is forecast to be $545 to $600/gold equivalent oz. Kinross will provide guidance for its 2014 production, cost of sales, and all-in sustaining costs for its combined Russian operations and other regions in early 2014.

First ore from development activities at Dvoinoye was delivered to Kupol in the second quarter of 2013. Total production in 2013 is expected to be approximately 25,000 gold equivalent oz.

“Dvoinoye is the fourth mine Kinross has operated in Russia, which remains our lowest-cost jurisdiction and a core operating region for the company,” Kinross CEO Paul Rollinson said.

As of December 31, 2012, Dvoinoye had proven and probable gold reserves of approximately 1.1 million gold equivalent oz at an average gold grade of 17.8 g/mt. The Dvoinoye reserves will be mined entirely using underground mechanized mining equipment, similar to that in use at Kupol, with approximately 2.1 million mt of ore expected to be mined over the mine life.

Kinross acquired 100% of the Dvoinoye deposit and the Vodorazdelnaya property on August 27, 2010.

According to Kinross, during the second quarter of 2013, first ore (20,000 tons) from development activities at Dvoinoye was delivered to Kupol, and the Kupol plant upgrade was successfully completed during the first week of the third quarter.

Underground development continued well ahead of schedule in the quarter, with 3,237 m completed year-to-date. The mine is expected to start first stoping operations in the third quarter of 2013, and is expected to reach targeted production in the fourth quarter of 2013. Overall infrastructure construction progress is at 73% and the project remains on schedule and on budget. 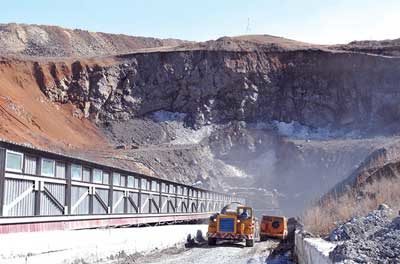