WorleyParsons completed the Water-berg PEA. The partnership is immediately initiating a pre-feasibility study of theproject.

“The peak funding estimate of $885 million is modest compared to the opportunity for large-scale participation in the platinum and palladium markets. In addition, we see significant opportunity to expand the project’s resources and to optimize the project in the pre-feasibility study…. The potential for good margins, improved safety, better productivity, and well-paid workers, along with improved working conditions compared to conventional mines, is exciting,” he said.

The Waterberg resource estimate is based on three layered zones of mineralization: the T1, T2 and F layers. The mine plan proposed in the PEA utilizes three decline clusters to access the deposit. The shallow edge of the T layer is at 130-m vertical below surface; the shallow edge of the F layer is at 220 m. The planned mining method is all mechanized, including a combination of room-and-pillar mining on mineralized layers 3- to 10-m thick and long-hole open stoping on layers 10- to 60-m thick.

The decline ramps for underground access are planned to be developed to the shallow edge of the T and F layers. From there, development ramps will be within the deposit along an apparent dip angle.

The Waterberg project will utilize a standard flotation mill, producing 655,000 oz/y of 3E in concentrate, with copper and nickel as credits. Independent test work has indicated that an attractive sulphide concentrate grading more than 100 g/mt 3E can be produced from both the T and F mineralized material. Further work to confirm the concentrate recoveries and characteristics will be completed during the pre-feasibility study.

Operating costs, including mining, milling, concentrate shipment, onsite overheads, the state royalty, and an allocation for head office overheads, are estimated at $438/3E oz, including copper and nickel as credits. (All estimates are based on a currency conversion of 10 Rand/US$.)

Waterberg project inferred resources are estimated at 167 million mt, grading 3.26 g/mt 3E (0.98 g/mt platinum, 1.97 g/mt palladium and 0.32 g/mt gold). For current economic calculations, the deposit has been truncated at a depth of 1,000 m. This cut-off may be reconsidered during the pre-feasibility study. 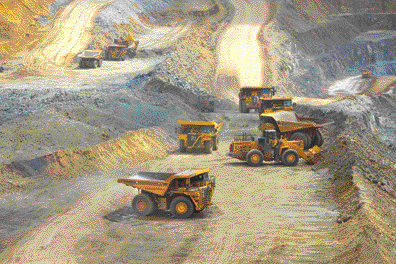 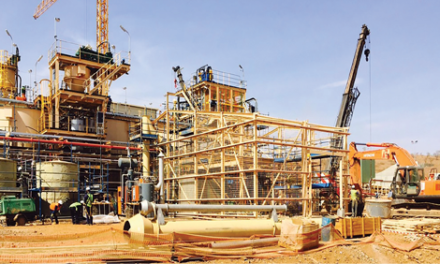