Ivanplats has signed a memorandum of understanding with the Democratic Republic of Congo’s state-owned power company, La Société Nationale d’Electricité (SNEL), to upgrade a third hydroelectric power plant, Nzilo 1, to secure an additional supply of sustainable electricity for Ivanplats’ underground Kamoa copper project in Katanga province. The proposed Nzilo 1 upgrade is in addition to planned upgrades by Ivanplats of the Mwadingusha and Koni hydroelectric plants. The three plants could produce a combined 200 MW of long-term, clean electricity for the grid, which would be more than sufficient to launch production at Kamoa.

The Nzilo 1 plant is on the Lualaba River approximately 40 km from the Kamoa project. The plant was commissioned in 1952 to supply power to nearby copper mines in the Kolwezi region, but now it is only partly operational due to the age of the installed generating equipment. Ivanplats and SNEL plan to conduct a feasibility study to assess the scope of work and cost of restoring Nzilo 1 to its design capacity of 111 MW.

Ivanplats is currently working on an update to the Kamoa preliminary economic assessment (PEA) released in September 2012. The PEA was for the construction and operation of a long-term underground mine, concentrator, smelter and associated infrastructure. Initial capital cost to develop the project was estimated at approximately $2 billion. The mining rate and concentrator feed capacity were established at 5 million mt/y, producing an average of 143,000 mt/y of payable copper during the first 10 years of operation at an estimated cash cost, net of by-product credits, of 95 cents/lb. The production scenario scheduled 299 million mt of material over 61 years, producing 7.8 million mt of blister copper.

Ivanplats intends to issue the updated PEA around the end of second quarter of 2013. 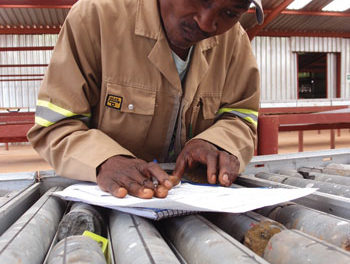