Golden Star Resources has completed a preliminary economic assessment (PEA) of the West Reef orebody at its Prestea underground mine in southwest Ghana and is proceeding with a full feasibility study. The orebody has an indicated resource of 874,000 mt grading 18.07 g/mt for 508,000 oz of gold, and the orebody is open along strike and down dip. Economic analysis suggests a capital cost to develop the project of approximately $115 million.

The West Reef PEA targets a modern, mechanized mine that would deliver ore to Golden Star’s existing Bogoso oxide processing plant at a rate of 1,200 mt/d at an average diluted mined grade of about 8 g/mt gold, producing approximately 90,000 oz/y at full production. Golden Star expects to begin development of a decline from surface in 2013. In addition, an ore hoisting shaft would be raise bored from West Reef to surface.

The West Reef orebody is steeply dipping (60o to 70o) and is 1.5 to 1.7 m wide. The PEA contemplates 1 m of dilution on either side of the ore and 20-m-spaced sub-levels. Stoping would use a modified Avoca mining method, where a central raise (slot) is developed in a panel of ore, production holes are blasted into the void, and the ore is mucked on the lower level. The stopes progress in both directions from the central raise, and waste backfill is introduced at the center to follow the blast faces.

The PEA has delineated a mining area within the West Reef orebody containing 375,000 oz of indicated resources and 85,000 oz of inferred resources. Total gold production is estimated at 437,000 oz over the life of the project. The West Reef PEA estimates life-of-mine cash operating costs in the range of $650 to $700/oz of gold, not including a 5% royalty paid to the government of Ghana.

Resolute Extends Mako’s Life of Mine

Platinum Mines Have Troubles of Their Own 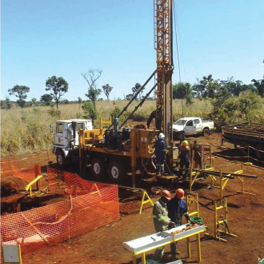