Peterstow Aquapower says its closed-loop system uses only a fraction of the energy, water and infrastructure required by its conventional competitors

It wouldn’t be totally surprising for someone hearing the gist of a story involving two Scotsmen, a new twist on centuries-old technology, an abandoned industrial property in a Southern African monarchy and the ongoing quest for deeply buried gold to imagine they were perhaps listening to the outline of a movie script—or maybe just the beginning of an intriguing bar tale. Quite the contrary, these are the principal components of Peterstow Aquapower, a hydropower-focused enterprise that is knocking on the doors of conservative South African precious-metal mining houses, promising significant operational and financial benefits for an industry facing stiff challenges in both areas.

Peterstow’s business is water power, a technology that has been used for centuries and which has been applied in many forms by the mining industry—including everything from high-volume water cannons used by placer miners to sluice down gold-bearing gravel from hillsides in Alaska, to experimental high-pressure water jets designed to micro-fracture hard rock formations underground. There are already water-powered rock drills in service, both in South Africa and elsewhere. For Peterstow, however, the technological focus is on precise control and recycling of relatively small volumes of water to efficiently power an innovative drill body that uses conventional drill steel and bits.

Peterstow Aquapower is the manufacturing arm of Peterstow Holdings, a private company formed in the U.K. by the father and son duo of Douglas and Alan Barrows to develop marketable technology employing closed-loop water hydraulics, particularly as it might apply to drill-and-blast mining methods used by South African gold and platinum-group metal producers. Douglas Barrows, 66, is the chairman of Peterstow and Alan, 39, is executive director, responsible for day to day operations, including product development and manufacturing. He oversees the Peterstow manufacturing facility at Ngwenya in Swaziland, a small country sandwiched between South Africa and Mozambique. Peterstow has offices in Johannesburg and Durban, as well as in the U.K., and also owns Dudley Associates, a company specializing in plastic molding tooling and materials.

During a recent tour of its African operations, Douglas Barrows was quick to explain Peterstow’s business philosophy to E&MJ. “We are not miners. We are specialists in water hydraulics technology,” he said—but then added he believes the company’s drill design “is the single most important piece of technology to hit the mining industry in 50 years.”

Barrows said he began pursuing possible applications of the technology in the mid-1980s and was later encouraged by Raymond Tarr, former chief of Anglogold’s technical services group, to look into the possibility of developing a water-powered drill that could potentially replace the thousands of compressed air-powered drills used throughout the South African mining industry and elsewhere. Although air-powered drills were the best available technology at the time, they are noisy, emit an obnoxious oil mist, and in extremely deep operations such as those found in the South African industry, require extensive and expensive infrastructure to deliver compressed air to the lowest levels of the mines.

“Compressed air is an inefficient use of energy,” said Barrows. In the deep underground mines of South Africa, a compressed-air drill is just the distant end of what can be thought of as a huge machine with most of the apparatus—electric motors, compressors and other ancillary equipment—on the surface, many kilometers away. According to Peterstow’s estimates, for every 100 kW put into a compressor on the surface, as little as 1 kW arrives at the intended source; the rest is lost along the way. A single large deep-level mine can incur electricity bills of well over $1 million per month in the South African power system, even with relatively cheap rates of around $0.06/kW-hr.

Ian Cockerill, former CEO of Gold Fields and currently chairman of South African coal and silica producer Petmin, has been an adviser to Peterstow for roughly a decade. He also believes the water-powered drill technology can be a game-changer for the South African mining industry. “This is a breakthrough technology which can give a huge leap in productivity. This kind of innovation means the mines can still operate while reducing their power requirements, and at the same time get a much more efficient drill which gives you more operating time at the face,” he said.

What’s Involved
The Peterstow Aquapower drill consists of two units—the drill itself and a power pack about the size of a compact refrigerator. The two assemblies are connected by hoses and operate in a closed-loop system that uses a minimal volume of water—continuously recycling that water from the drill to the power pack—and emits nothing to the surrounding atmosphere. The only external inputs needed are an electrical supply for the power pack and a low-volume source of mine water to flush the drill cuttings from the blast hole.

At about 28 kg (62 lb) the drill itself is relatively lightweight and has a minimal number of moving parts. The power pack weighs 275 kg (600 lb) and measures 790 mm high x 650 mm wide x 850 mm deep (32 x 26 x 34 in.). It produces 110 bar (1,600 psi) of hydraulic pressure for drill operation. The drill itself requires a water flow rate of 36 liters/min (9.5 gpm) and has a maximum strike rate of 1,950 blows per minute. The power pack, which incorporates a rotary hydraulic motor developed by Danish fluids-handling specialist Danfoss, and drill are connected by two hoses that allow the two units to be separated by considerable distance—thus allowing the power pack to be located outside an active stope, for example. The accompanying sidebar shows the principal components and sequence of operation.

The power pack is available in two power ratings: 7.5 kW and 15 kW. The more powerful version is intended specifically for rig mounting.

Although the level of technical design and innovation incorporated into the drill is an interesting topic in itself, Peterstow’s management and advisers are enthusiastic about the bigger picture—the ‘game-changing’ potential of water-hydraulic drill technology to provide economic relief to an industry plagued by high operational costs and prospects of those costs getting much higher in the not-too-distant future. For example, a South African precious-metal mine’s typical energy costs three or four years ago were in the range of 8%  to 10% of unit costs; in the future, that is expected to rise to 15%.

A typical large South African underground mine can have thousands of compressed-air drills in service throughout the property and it’s estimated that, across the entire industry, several hundred thousand blast holes are drilled each day. The infrastructure required to support the compressed air, ventilation and cooling, and water requirements of these operations is massive and expensive to install and maintain. In addition, power shortages have significantly impacted the South African mining industry and will continue to do so; Eskom, the state-owned power utility, currently requires mines to use 10% less power than they did a year ago, and it is likely to demand additional cuts in the near future.

These cutbacks could reduce mine production by as much as 40%, according to Peterstow’s estimates—but Douglas Barrows believes widespread integration of his company’s technology could help boost the industry’s production to the levels achieved before the power cuts were imposed.

As an example, he said 500 Aquapower drills would use 22,500 kW-hr of energy in a month, based on a six-hour daily drilling period, compared with an equivalent number of air-powered drills that could require as much as 3 million kW-hr. The capital costs for the Aquapower drills, he said, would be about $18.5 million per 1,000 units, compared with $40 million for an equivalent number of air-powered drills and the infrastructure needed to support them. Because the water consumption of the Aquapower drills is lower—less than two tons of water per ton of ore extracted, compared with five to six tons of water per ton of ore with pneumatic technology—the volume of water required by the industry could be reduced by 20 million tons per year.

Overall, Peterstow claims its drilling system is capable of operating on less than 1% of the energy required by some conventional drilling systems, and 40% to 60% less water consumption.

Technical Details
Alan Barrows, in charge of day-to-day operations for Peterstow’s drill production facilities, said one of the biggest challenges in adaptation of water hydraulics to modern industrial applications was a change in focus from low-pressure, high-flow systems to high-pressure, low-flow systems. The primary engineering problem, he explained, was finding a way to guarantee constant lubrication of a device’s moving parts with water.

The solution, according to Barrows, was to identify how certain materials interact when lubricated by extremely thin films of tap-quality water, and then determine the best methods to machine and finish those materials as internal drill components. The Aquapower drill assembly involves extremely fine tolerances—ranging from 2 µm to 5 µm—for its few moving parts. In comparison, oil-lubricated machinery generally has much wider tolerances, in the 30- to 35-µm range.

A tour of Peterstow’s drill production plant in Ngwenya, Swaziland, just a few miles from the South African border, confirms that the company is well-positioned, technically, to produce fine-tolerance devices. The plant, located on a disused 32-acre industrial site, has been extensively renovated, is equipped with millions of dollars worth of modern machine tools and can perform almost every operation needed to achieve the required fit and finish quality with the exception of some heat-treating procedures that are outsourced. Barrows said he is currently working on developing additional capabilities to eliminate any need to send parts out for treatment.

Even with the plant’s capabilities clearly evident, the question ‘why Swaziland?’ generally arises in business discussions, said Barrows. “At this location, we’re geographically close to our main clients in South Africa,” he explained. “The border crossing is efficient and allows us to receive and send shipments by truck without problems, and we also have access to a ‘dry port’ containerization facility in Swaziland that enables us to ship anywhere overseas.”

The plant and its opportunities for local employment, along with community involvement and charitable work provided by Peterstow, has brought important business and social benefits to Swaziland—a monarchy that achieved its independence from Britain in 1964—and overall, the operation represents one of the 10 largest business investments in the country’s history.

The Market
Peterstow is not the first company to develop and promote hydropowered rock drill systems; Wassara, Sulzer and Novatek, a South African company, have significant market presence in this sector, with Novatek in particular strong in the South African industry, claiming to have well over 1,000 of its gravity-fed or pumped-hydropower drills in service there. Both Novatek and Sulzer offer handheld jackleg versions as well as rig-mounted systems.

Nevertheless, Peterstow’s management believes the company’s closed-loop technology provides measurable cost and performance advantages in comparison with its hydropower, pneumatic- and electric-power drill competitors. Peterstow said it tested 20 of its Aquapower drills at a large underground mine starting in 2009 and achieved a high level of success during the 300 drill-hour test with no equipment failures and no measurable levels of wear. In its own tests involving drilling standard-diameter blast holes into 500-m Pa-compressive-strength granite—about twice the average hardness of rock found in South African mines—Peterstow said its drills routinely outperform conventional drills by a significant margin.

The company said it has received expressions of interest from at least two large South African mining houses, as well as from other interested parties. 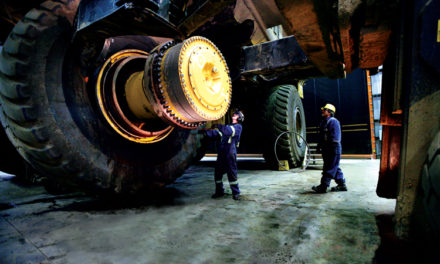 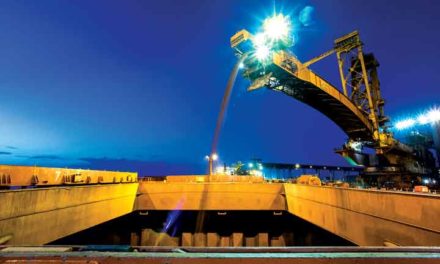