On December 29, 2012, Vale Sohar, one of the largest bulk carriers in the world, was welcomed to Oman by members of the North Al Batinah community, headed by H.E. Sheikh Hilal bin Ali Al Habsi, Wali of Sohar. With the capacity to transport 400,000 mt of mineral cargo, the vessel docked at Vale’s deep-water jetty in the Port of Sohar to unload iron ore on its first voyage from Brazil. In November 2012, Vale Liwa was the first Omani-owned Valemax to call.

First Super Hub: The Port of Sohar, Oman
In mid-July 2012 three loaded Valemax vessels were on their way to the Port of Sohar in Oman. This was one of the first steps in operating a new super hub for Vale’s Brazilian iron ore. Before Vale began ordering the first of its Valemax fleet in August 2008, they realized there were only a few deep-water ports in the world where they could unload them, and they began taking steps to secure them. The Port of Sohar in Oman was one of them. Vale would build super hubs based on three key elements: ideal location, iron ore pelletizing plant, and port facilities capable of discharging a Valemax.

As a result of business collaboration with Vale, the Sultanate of Oman invested $12 billion on the development of Sohar Industrial Port, and has built the first super hub in Sohar. In May 2008, Vale and Sohar Industrial Port Co. signed a 50:50 joint venture agreement between the government of the Sultanate of Oman and the Port of Rotterdam to construct a production facility and distribution center for iron ore pellets in the Port of Sohar. This was Vale’s first iron ore venture outside Brazil, and its total commitment would amount to $1.356 billion. From this super hub in Oman, Vale is now poised to reach customers in Saudi Arabia, the UAE and India.

With two of the four Valemaxes built for Oman Shipping Co. now in service, the world is witnessing the start of a new logistics era for the region. The first vessel to arrive in Oman was Vale Liwa, which unloaded its shipment of iron ore in November. Vale Sohar sails from Brazil to Oman, carrying the history and pride of the Omanis to unveil it to the whole world. It is currently en route to the Port of Tubarao in Brazil for reloading. The two remaining vessels, Vale Shinas and Vale Saham, are currently in the final stages of construction, and were scheduled to be handed over during the first quarter of 2013.

Due to the large capacity of Valemax vessels, the shipments create a virtual iron ore mine in Oman, ultimately allowing Vale to serve its growing network of clients in the Middle East, North Africa and Indian subcontinent faster and more efficiently. So far nine ports around the world have received Valemax ships—Dalian (China), Villanueva (the Philippines), Tubarão and Ponta da Madeira (Brazil), Taranto (Italy), Rotterdam (the Netherlands), Sohar (Oman) and Kimitsu and Oita (Japan)—as well as a floating ore transfer station in Subic Bay in the Philippines. China could easily add another three by mid-2013 if it so desires. (See China’s Deep Water Ports, Coal Age, December, 2012). By the end of 2013, 35 ships each capable of transporting 400,000 metric tons (mt) will be available to carry iron ore for Vale—19 of them owned by Vale and 16 chartered by Vale through long-term contracts.

Vale has achieved full production capacity of 9 million mt/y of direct-reduction pellets at its industrial complex in the Port of Sohar. Vale’s Industrial Complex comprises two pelletizing units, each with a nominal production capacity of 4.5 million mt of direct-reduction pellets per year, and a distribution center with a throughput capacity of 40 million mt/y. Vale has also invested $40 million in technologies to reduce the project’s environmental impact, such as electrostatic precipitators and a 3,150-m-long wind fence to control particulate matter emissions. The site has a continuous emissions monitoring system and 100% of the water used is recycled.

Vale will set up an iron ore pelletizing plant in Lumut, Malaysia, after its $1.3 billion maritime terminal in Teluk Rubiah is completed in the first half of 2014. Total capital expenditures are expected to reach $5 billion before the distribution center is complete. It will serve customers in the Asia-Pacific. From an initial capacity of 60 million mt, it is expected to increase to 200 million mt when complete.

Vale’s loading docks in Brazil are three times further away from Asian markets than its Australian competitors. The Valemax vessels, costing much less per ton to operate than smaller vessels, will even the playing field somewhat. Once the Teluk Rubiah distribution center begins operating, iron ore from Brazil will be transported to Teluk Rubiah in Valemax vessels. From here, the blended ore will be distributed to customers in China, Japan and Taiwan using smaller vessels.

If we count the two floating transfer terminals, Ore Fabrica and the under-construction Ore Sessogo, it works out to be two super hubs and two mini hubs under direct Vale control. The vessel Ore Sossego arrived at Chengxi Shipyard just upriver from Shanghai on November 1, 2012. It is the sister vessel of Ore Fabrica, which was converted from an ore carrier to a floating transfer station during the end of 2011 and beginning of 2012. Like the Ore Fabrica it will be strategically placed for transferring Valemax iron ore cargoes to smaller vessels for final delivery to customers in shallow draft ports.

Once Vale’s second floating ore transfer station begins operating, which was planned for the first quarter of 2013, Vale will be fully prepared to serve Asian markets on an equal footing with its competitors based in the region. This entire logistics solution, encompassing ships, transfer stations and distribution centers, is expected to be in place by the start of 2014. Vale is truly changing the world of iron ore logistics.

The Key to the Strategy: Valemax Vessels
Perhaps the first time the average iron ore marketer heard of Valemax vessels, Vale’s gigantic 400,000-ton iron ore carriers, was in connection with China refusing to unload them in 2012 due to safety concerns. No doubt competitors everywhere silently cheered. The typical reaction among the maritime community was, “What is Vale going to do now? They have ordered 35 of these giants, and they have nowhere to unload them.” In fact, it was recently reported that “they have been drifting aimlessly since May last year.” [SteelGuru.com, December 8, 2012]. Valemax vessels have actually made more than 31 deliveries and have experienced none of the safety problems that are China’s source of concern.

They are slightly longer than the aircraft carrier USS Enterprise. Vale had 20 of the Valemax vessels working by year-end 2012. The 14 Valemax vessels operating in September had made 31 deliveries: 10 to Sohar (Oman); 10 to Subic Bay (Philippines); six to Taranto (Italy); two to Rotterdam; and one each to Oita (Japan); Villanueva (Philippines); and Dalian (China). The Port of Tubarão in Vitória, Brazil, received the Vale Espírito Santo on October 30th. Named for the state that is home to the company’s most important iron ore export port, the ship was to be loaded with ore before sailing to the Port of Sohar in Oman. This would be the ship’s first loading operation and the tenth time a Valemax vessel has docked at Tubarão.

The Vale Espírito Santo is one of 18 ships already operating, out of a total order for 35 ships owned or chartered by Vale, placed with Chinese and South Korean shipyards, to be delivered by 2013, and to operate exclusively for the company. In July, five loaded Valemax vessels were headed for its Ore Fabrica transloading facility in Subic Bay, Philippines. All were loaded to the maximum draft of 23-23.2 m at Vale’s Sao Luis Terminal in Ponta da Madeira, Brazil. The 280,000-mt Ore Fabrica, previously a crude oil tanker, has been reconfigured to serve as a platform for unloading the Valemax vessels and loading the ore into smaller vessels that can unload without question at Chinese iron ore terminals.

For anyone that might have thought the Chinese port ban would stop the Valemax building program in its tracks, take a look at what is happening now. Clearly, Vale had mad backup plans to unload their vessels at deepwater terminals closer to the Middle East and Asia, and was not totally reliant on China’s ability to unload them. Vale knew all along there were a few significant deep-water terminals outside China, and made plans to use them. Nevertheless, Vale has also done everything in its power to make its logistics system work for the Chinese. Eventually, the Chinese will permit their deep water terminals to take the Valemaxes directly, but in the meantime, the Valemax vessels will keep working to minimize shipping costs for Asian, Middle Eastern and European customers that do business with them.

Perhaps it is time for China to start opening a few of its deep-water terminals to Valemax vessels. Not only has Vale proven Valemax safety with 18 vessels making over 31 deliveries to seven different terminals, they have done so at great expense to the company. The Chinese ban on unloading Valemax vessels costs Vale $2/mt to $3/mt of ore, because Vale has built the transfer vessel Ore Fabrica to transfer ore to smaller vessels in Subic Bay, Philippines. Vessels that should be saving $6/mt in shipping are actually costing Vale money, all for the sake of nurturing its best customer, China.

Dave Gambrel is the president of Logisticon, a transportation consultancy. He was director of transportation for Peabody Coal Co., and was in charge of the company’s global shipping program. He was a member of the U.S. negotiating team for the LAXT terminal, and a member of the DTA management committee. He may be reached at bunkgambrel@earthlink.net.

Historic Copper Mine on Track for Startup 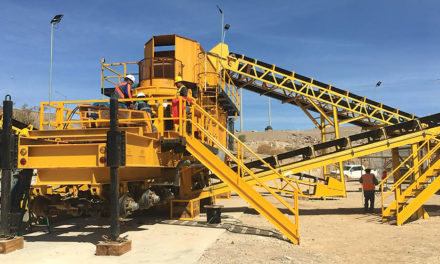 Crush It, Maintain It, Control It