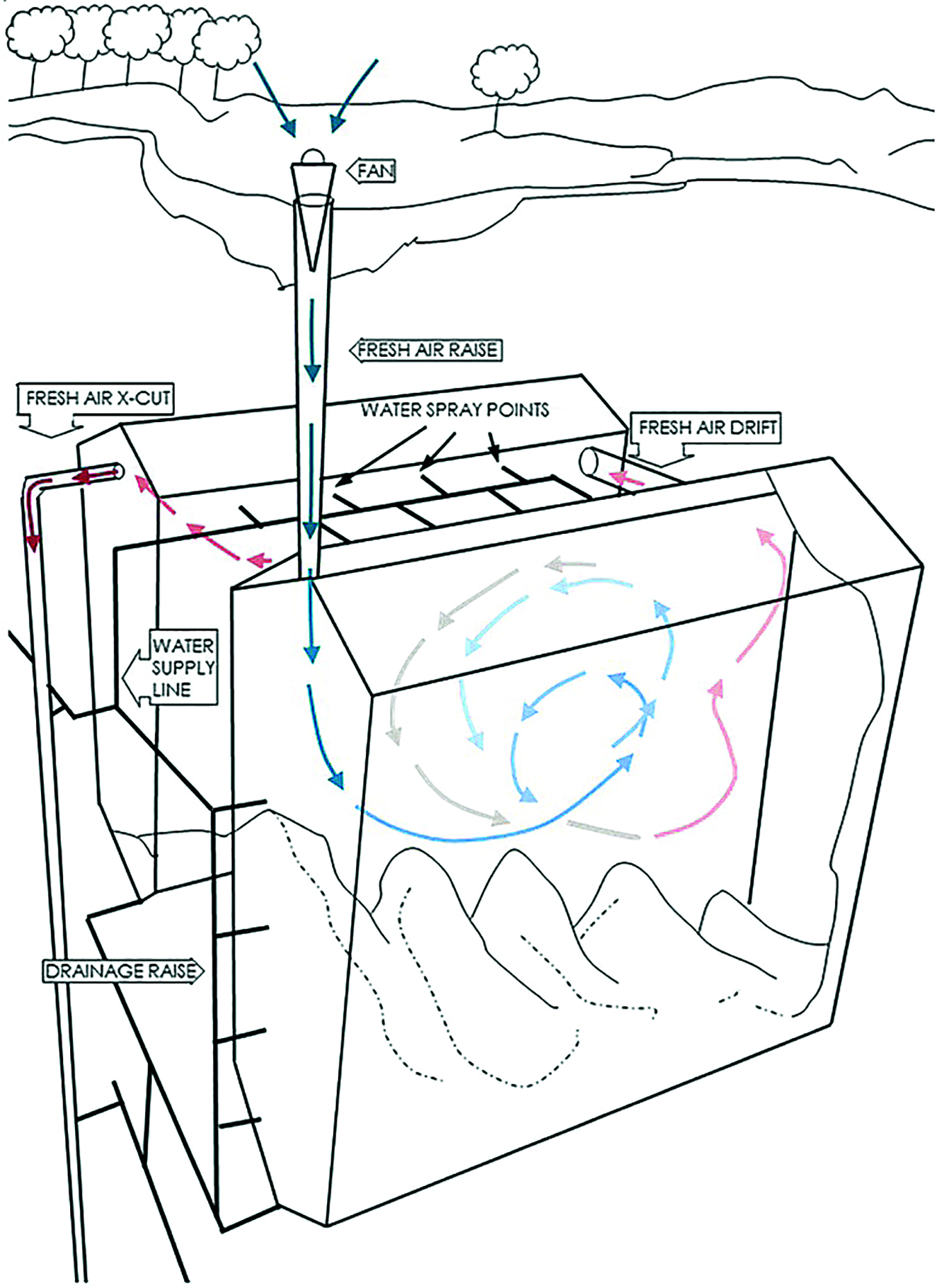 A schematic of an ice stope that was used in Frood-Stobie, Ontario, until 2017. This system was used for heating a mine, but it could also be used to cool a mine.

If you have ever been in a deep underground mine, you have felt the heat. It can emanate from several sources, including the geothermal heat in the surrounding rock; heat from diesel or electrical equipment operating underground; and auto-compression of ventilation air, which warms as it’s pushed deeper into mines. So, it’s important to keep underground mines cool for workers. After all, no one wants to work in an oven.

To cool the intake air, chilled water is cooled in a large refrigeration chiller and sprayed onto the incoming ventilation air in a large chamber. Alternatively, the chilled water can be pumped into a heat exchanger, and the ventilation air cools as it’s forced into the heat exchanger. The cooled air can then be used to ventilate the mine. Unfortunately, these refrigeration chillers can be expensive to operate, especially in remote areas, where the cost of electricity is at a premium. Due to their reliance on electricity, these systems can be a big contributor to the overall carbon emissions in the operation of a mine. Wouldn’t it be great to use all that winter snow to cool mines in the summer?

Mine operators looking for a new solution for heat problems might consider one of these three innovative methods — all of which involve different sources or forms of water. It’s possible to cool the mine in a sustainable way that’s also more affordable.

Now let’s look at some alternative ways to cool your mine. If you’re considering this first innovative system — lake water cooling — a fun fact about water: it’s heaviest at 4°C (39°F). If a lake is deep enough, cool water can be found at the bottom, even if the lake is frozen over. To avoid contamination, the mine could use a closed-loop heat exchanger. This consists of an array of pipes at the bottom of the lake that transfers cooling to the mine’s cooling heat exchanger. So, as the water gets pumped around and into a heat exchanger, the mine’s ventilation air cools.

If this concept sounds familiar, you may have heard about it through the work of Enwave Energy Corp. in Canada. Enwave uses this technology for both district heating and cooling in Toronto, via cold water from pipes in Lake Ontario. Scotiabank Arena, home of the Toronto Maple Leafs and Toronto Raptors, uses Enwave’s cooling system.

Here’s the thing: lake water cooling has not yet been proven for mining. Why? Well, the high capital cost of the system could be a reason, since it’s surprisingly expensive compared to refrigeration cooling, especially when you consider that the cooling system is mainly a bunch of pipes at the bottom of a lake.

Thankfully, the operating cost of the system is very low, so this concept could be an attractive solution for owners of remote mine sites dealing with carbon taxes or high electricity prices.

Another method is seasonal thermal storage (aka ice stopes), which refers to a system that transfers cooling from one season to another. It’s a fascinating idea, but it’s only applicable for countries with subarctic climates. Canadian mine owners could consider this system.

A hospital in Sundsvall, Sweden, successfully tested this concept in 1999. Hospital workers stored winter snow in a pit, using sawdust to insulate the snow from the sun. The next summer, they used stored snow to meet all their cooling demands. Their biggest challenge? Rainwater melting the snow.

A mine could use underground excavations to store the snow — away from rainfall and solar radiation. Melt the snow as required in summer by spraying the cooling water onto it and use the chilled water to cool the mine ventilation air.

Interestingly, this system could be taken a step further by using it to heat the ventilation air as well. You spray warm mine return water onto the cold intake air before it’s introduced underground. When the water meets with the cold air, the air warms up and the water changes state into ice, which deposits at the chamber and can be stored for cooling later in the year.

In a mine, the old working areas that have been mined out are typically called “stopes.” So, you can call this cooling (and heating) system an ice stope. Historically, two Canadian mines have used ice stopes but only for winter heating. Miners in Quebec used the system in Rouyn-Noranda from 1942 until the mine closed in 1976. Ontario miners used it at Frood-Stobie, which operated from 1955 until 2017.

If the cost of the excavation is excluded, the capital and operating costs of an ice stope are significantly lower than conventional refrigeration cooling. Could this make sense for your mine?

Here’s another technique: use hot ground fissure water for cooling. Certain mines experience very high ground water temperature, which requires constant cooling so that miners can do their jobs. For example, the Resolution mine in Arizona deals with water temperatures that reach 80°C (175°F), making it extremely challenging to mine.

When groundwater is used, cooling can be produced underground, near the active workings. This reduces the losses from moving cooling from the surface to the underground. Stantec is currently studying the economics and performance of this type of cooling system.

These three innovative cooling systems use natural resources to maintain adequate air temperatures underground. All three systems have minimal operating costs, because the energy comes from either cool water at the bottom of a lake, snow (which is plentiful in subarctic climates), or hot fissure water that gets pumped to a treatment plant.

When considering cooling options for an underground mine, it’s important to be resourceful. Use the energy sources available on a mine site. Through creative thinking, it’s possible to find ways to cool the mine affordably and sustainably.

Passionate about finding sustainable solutions that reduce society’s impact on the environment, Trapani is a ventilation engineer working with the Stantec team in Phoenix, Arizona.

Running Right: A Piece of Pi 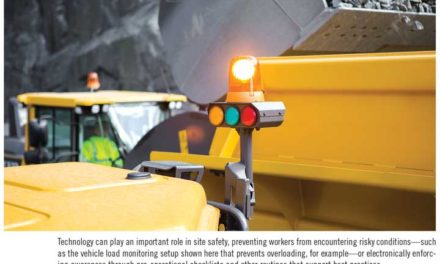 Mine Safety: Working Within the System 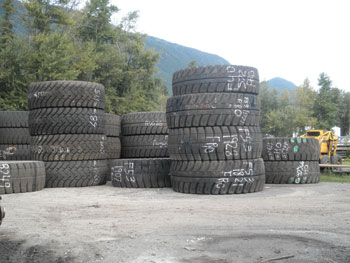