Training the brains, eyes and hands of operators is usually the best bet for increasing loading site efficiency, but some problems lend themselves to high—and even not-so-high—tech solutions 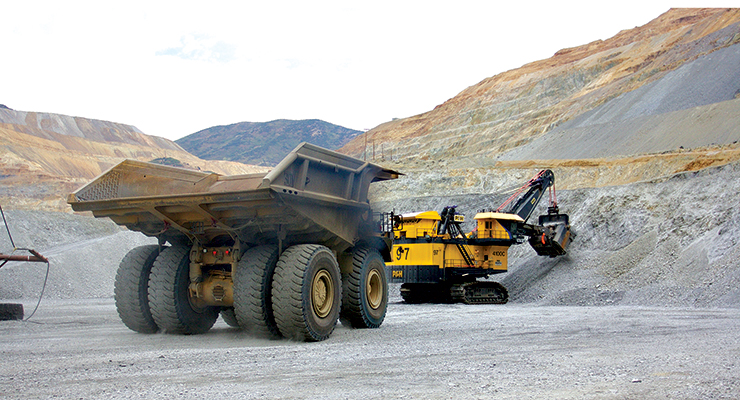 Anyone familiar with surface mining knows the simple process of scooping up bucket loads of rock and dumping it into large trucks involves more than meets the eye.

Did the truck get there in time to avoid excessive shovel idling? Is it spotted in the right position for optimal shovel cycling? Did it arrive with a ton of carry-back material stuck in the bed? Is the shovel operator placing the load properly in the body? Has there been enough time between truck arrivals and departures to allow the loader to clean the pit floor? With these and maybe a dozen or so additional loading-related factors affecting productivity, it’s easy to understand why this step is one of the most studied and analyzed segments of the overall mining process.

It’s also a part of mining in which small numbers can spawn big numbers—both good and bad. Single-digit percent increases in loading site efficiency can generate significantly higher revenue per truck operating hour when metal prices are good, and reduce an operation’s cost per ton when the market is down. Conversely, one badly placed load or a driver error can take a truck out of production with frame or tire damage, losing thousands of dollars of revenue in the process.

Given the importantance of loading efficiency, it’s natural to assume that a close focus on improving truck/shovel/loader interaction at the face might pay off handsomely. But it’s not always that easy: As Kent Clifton, senior marketing specialist–mining equipment for Caterpillar Global Mining, told an audience at Mining Media’s recent Haulage & Loading 2015 conference (H&L), it’s certainly possible to gain improvements by concentrating on efficiencies specifically at the loading area, but in order to achieve optimal results leading to reduced cost per ton, it’s necessary to take a wider view, looking upstream—at when and how trucks arrive at the face—as well as downstream, monitoring the conditions they encounter when leaving the area and hauling loads to the dump site.

Although a sound understanding of a site’s geology, ore and waste characteristics and environmental variables, along with proper fleet management and comprehensive operator training, form the foundation of an efficient loading operation, emerging technologies can play a useful part in achieving higher productivity in several phases of loading and haulage operations. Here are a few useful examples, drawn from the conference proceedings as well as from the technology providers themselves.

This is what the truck operator sees when viewing the in-cab display for Neptec’s 3DRi Spot Assist system.

Regardless of which truck loading method a mine uses—single side, double side or standard/modified drive-by—arriving haul trucks must end up in the proper spot next to the shovel in order to achieve optimal cycle performance. For operators approaching sites where dust, fog, darkness, heavy rain or snow obscures vision, these conditions can add degrees of difficulty to spotting maneuvers—not to mention the extra care needed to remain aware of light vehicles in the area.

3DRi Spot Assist uses OPAL 3-D sensors mounted on a shovel together with a single computer running the 3DRi SDK and Spot Assist software application to continuously scan the loading area around the shovel and recognize and track haul trucks as they prepare to spot beside the shovel for loading. The application calculates the optimal loading position beside the shovel, determines a valid path for the haul truck to back up into that position, and provides the haul truck driver with cues on a display in the truck during the spotting maneuver. The system supports single- and double-sided loading configurations. It also alerts the shovel and haul truck operators to obstacles that may appear in the path, and reports on spotting efficiency to assist with operator training and benchmarking.

Potential benefits from use of the system include:

It’s simple: When it comes to haul-fleet economics “…a truck that is running is making money, and a truck that is down is costing you money,” said Robert Paxman, sales support manager–mining for Metso. “Our job is to keep that truck in service” by maximizing the advantages associated with truck bed liners. In an H&L conference presentation jointly authored by Paxman and Henrik Persson, Metso’s global product manager–lining, the benefits of rubber liners were compared with steel products.

The main advantages to be gained from use of rubber truck liners are threefold, according to the Metso experts: better stress absorption—not just in the truck bed, but throughout the truck’s entire structure; increased truck availability due to longer wear life; and an improved work environment for truck operators.

Drawing from one aspect of a larger study—in this case, at an open-pit copper mine that operates 10 320-ton-payload haulers carrying ore lumps up to 2 m large—Metso claimed savings of more than $3 million over a five-year period when rubber lining performance was compared with steel. During the study, sensors were installed at strategic points to measure vibrations in truck tray bottoms, strain at the tray bottom, strain in cross beams and rear suspension shaft and noise in the cab.

Results from the sensors measuring vibration at the tray bottom during loading showed a huge difference; according to Metso, there was 95% less vibration, measured in g-force, in trucks equipped with rubber liners compared with those that had steel liners. In fact, the disparity in vibration between the two liner materials was so large that different scales had to be used to show the results in graphical form, according to the authors; if the same numeric scale had been used for both materials, the range of vibration measured at the rubber-lined tray bottom would have been undetectable on a chart.

Similarly, results from strain measurements in the tray bottom and at the rear shaft of a rubber-lined truck bed during loading and dumping, when compared with a steel-lined tray, showed dramatically lower stress and strain generated in the rubber-lined unit.

And, when evaluating loading-related noise in the cab, sensors measured a level of 97 dB in a steel-lined body when rock from the bucket hit bare metal, compared with 87 dB in the rubber-lined unit, representing a 50% reduction. And although impact sounds are progressively muffled by the material already in the truck, sensors still indicated a level of 95 dB for a steel-lined truck and 82 dB for the rubber-lined truck during the second bucket load. In addition, the authors pointed out that noise reverberates much longer with a steel-lined tray than with a rubber-lined tray, creating additional discomfort for the driver.

The $3 million plus in savings claimed by Metso over the course of the mine study included reductions in initial installation costs, service and maintenance, fewer “spare” boxes needed for installation, lower fuel consumption, less carryback and various environmental benefits—all of which amounted to $307,160 per truck x 10 trucks = $3,071,600 in total over five years. Harder to quantify are savings provided by reduced incidents of driver distraction, fatigue and discomfort associated with the loading process.

Determining how closely a mine’s loading procedures allow its trucks to stay within recommended payload weights is important for several reasons, including fuel burn and tire life, vehicle braking and steering system performance, component service life, and last, but definitely not least, support for warranty coverage and/or maintenance and repair contracts. Probably the most familiar policy regarding payload/overload issues is Caterpillar’s “10/10/20” policy, which states that the mean (average) of a truck’s payload distribution should not exceed the target payload, no more than 10% of its loads should exceed 1.1 times its target payload and no single payload should ever exceed 1.2 times the target payload.

However, calibration of truck-based payload systems takes time and care, and must be done according to manufacturers’ instructions and specifications, while numerous units in service today simply don’t have those systems installed. Many operations depend on shovel-based payload systems to avoid short- and overloading instances that sap haulage productivity.

Mining shovel OEMs such as Joy Global’s P&H unit offer systems that are compatible with popular mine- and fleet-management solutions from Modular Mining Systems, Wenco and others. P&H’s universal shovel interface, which works with any shovel equipped with its Centurion control systems, allows machine operational and performance data to be shared with third-party software packages. Specifically, P&H’s Payload system provides the following key information:

“Traditional truck-based payload methods have inherent challenges such as truck sensor calibration, trucks lacking a weighing system altogether, and the length of time it takes for payload data to reach the operator. These challenges can impact the accuracy of the information and the usefulness of the data. Keeping a fleet of truck payload systems accurately calibrated is a challenge for any mine site,” Jessett said, noting that the lack of a consistent truck loading control system can result in a number of costly impacts such as truck overloads and underloads, at-face dumping and truck bunching.

“All of these impacts can lead to lower production rates and higher haul truck maintenance costs, including premature tire failure and higher fuel costs,” said Jessett. “By providing real-time feedback to the operator, shovel-based payload monitoring systems enable well-trained shovel and excavator operators to consistently fill the trucks with a smaller variation in the final truck load. If truck payload is more consistent, productivity will improve and operating costs reduce.”

Jessett explained that gaining even a 1% production improvement from a loading tool can deliver significant outcomes for mine sites—but, pointing to a recent case study at one of MineWare’s North American mining clients, he said MineWare’s Argus system had been instrumental in achieving an increase of more than 10% in truck loading performance for the customer. 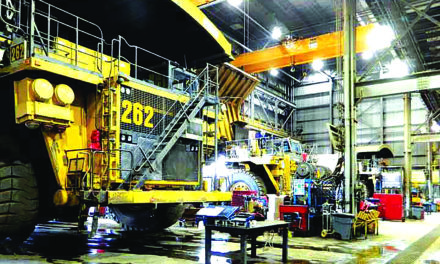 Considerations for a Mine Maintenance Program