Hauling and crushing thousands of tons of rock takes a daily toll on mining equipment. The machines must withstand significant abuse in terms of impact and wear to load and crush copper and iron ores. Even softer rock, such as coal and aggregates can degrade haulage systems over time. Depending on which system fails, the effects of wear, which take place over time, could bring an entire operation to its knees in seconds until it is repaired or replaced.

Traditional tough materials, such as rubber and steel, only last so long when continuously exposed to severe wear, especially with coarse ores and bulk materials. Sometimes traditional liners may not sufficiently protect against abrasion. For these situations, there are new weapons available to fight the war on wear. Soon, more sophisticated ones will be introduced. 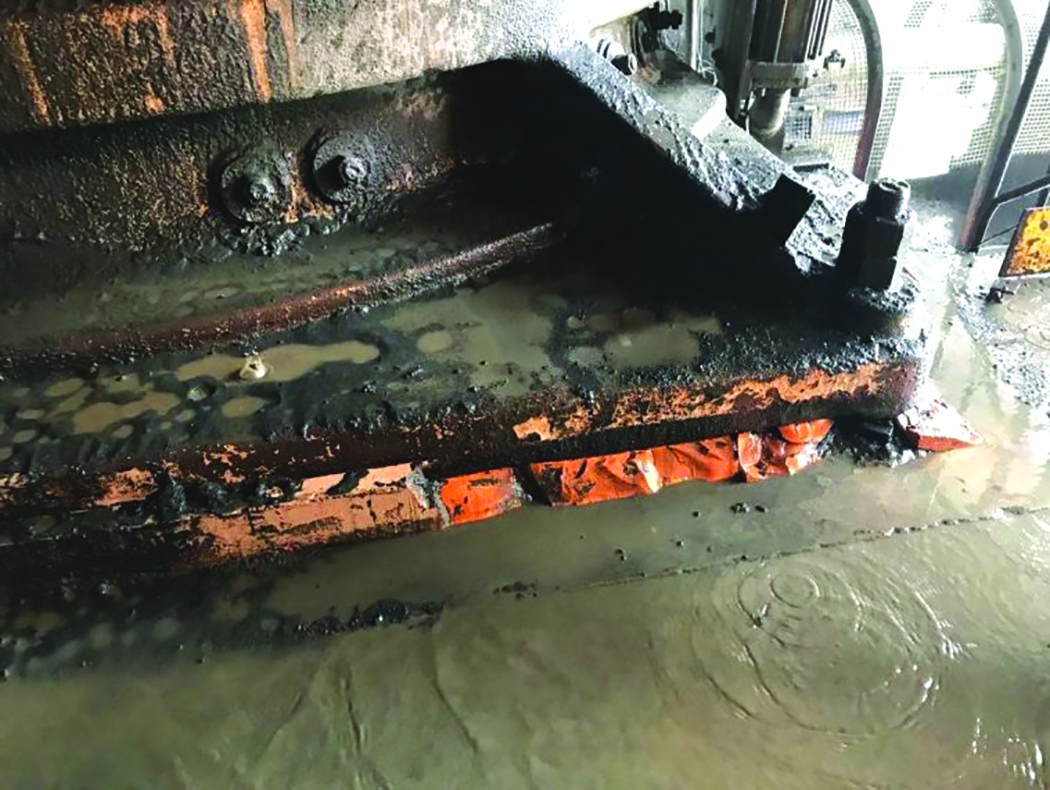 As can be seen at the base of this crusher, vibration can lead to degradation.

Urethane manufacturers believe it provides greater shock and wear resistance than rubber or steel. It can be manufactured into specific shapes and the material also has the ability to change shape under heavy pressure, then return to its original shape once the load is removed.

Urethane’s abrasion resistance is often used to combat severe wear in mining conveyors and the rubber skirtings designed to prevent dust and spillage at transfer points.

“Rubber is not as abrasion resistant as urethane, and fancy steel liners do not provide sufficient resistance either,” said Charles Pratt, operations manager at Kinder Australia, an independent supplier and manufacturer of conveyor and bulk material handling equipment.

Pratt turned to Kryptane, which has been used in the toughest mining applications for more than 25 years. “In testing for some mining applications, we found the urethane skirtings on the outside of a conveyor can last 10-15 times longer than rubber,” Pratt said. “Compared to a steel liner on the inside of a conveyor, a urethane liner can get five to eight times the life.”

Kryptane is manufactured by Argonics, a Michigan-based firm that specializes in high-performance, urethane-based elastomers and is one of the largest producers of wear-resistant and customizable urethane products.

Since the urethane has a 60% lower coefficient of friction than rubber, this also means less wear on the liner when the load is discharged as well as less carryback material remaining in the bed.

Mine and quarry bulk handling equipment can experience severe wear in contact with a variety of coarse materials, particularly at “hot spots” where excessive abrasion occurs.

In such cases, the bare structure of the equipment may not be adequately wear resistant and even traditional steel or rubber protective liners may insufficiently control the abrasion. This can pose a risk of costly spillage through holes and gaps, along with production downtime for repair and clean up.

For such applications, sheets made from urethane provide far better wear resistance than more traditional options such as rubber or steel (both AR400 and AR450 plate).

This “tougher than steel” liner can be made even more durable with embedded ceramic tiles. It can also be cut from full sheets of various sizes to fit the contour and shapes of high contact areas, so it can easily be welded or bolted to provide extreme wear protection wherever it is required.

Urethane with embedded ceramics can be optimized to resist not only sliding abrasion, but also impact, or various combinations of the two. This approach can last up to 10 times longer than steel or rubber alone, and up to four times longer than urethane alone.

While urethane liners can be cut to fit and installed on-site, custom liners made to fit more complex configurations can increase reliability, simplify installation and further reduce production downtime.

As such, Kinder Australia’s Pratt looked to a proprietary urethane when a unique combination of attributes was required for mining applications to optimize conveyor skirting so it would not prematurely wear the conveyor belt if rubbed against it.

“Argonics was able to formulate a conveyor skirting material that was not only abrasion resistant, but also soft and slippery to minimize any potential conveyor belt wear,” Pratt said. “The urethane is very customizable. For applications such as coal mining, you can also make it resistant to fire and temperature as well as anti-static.” 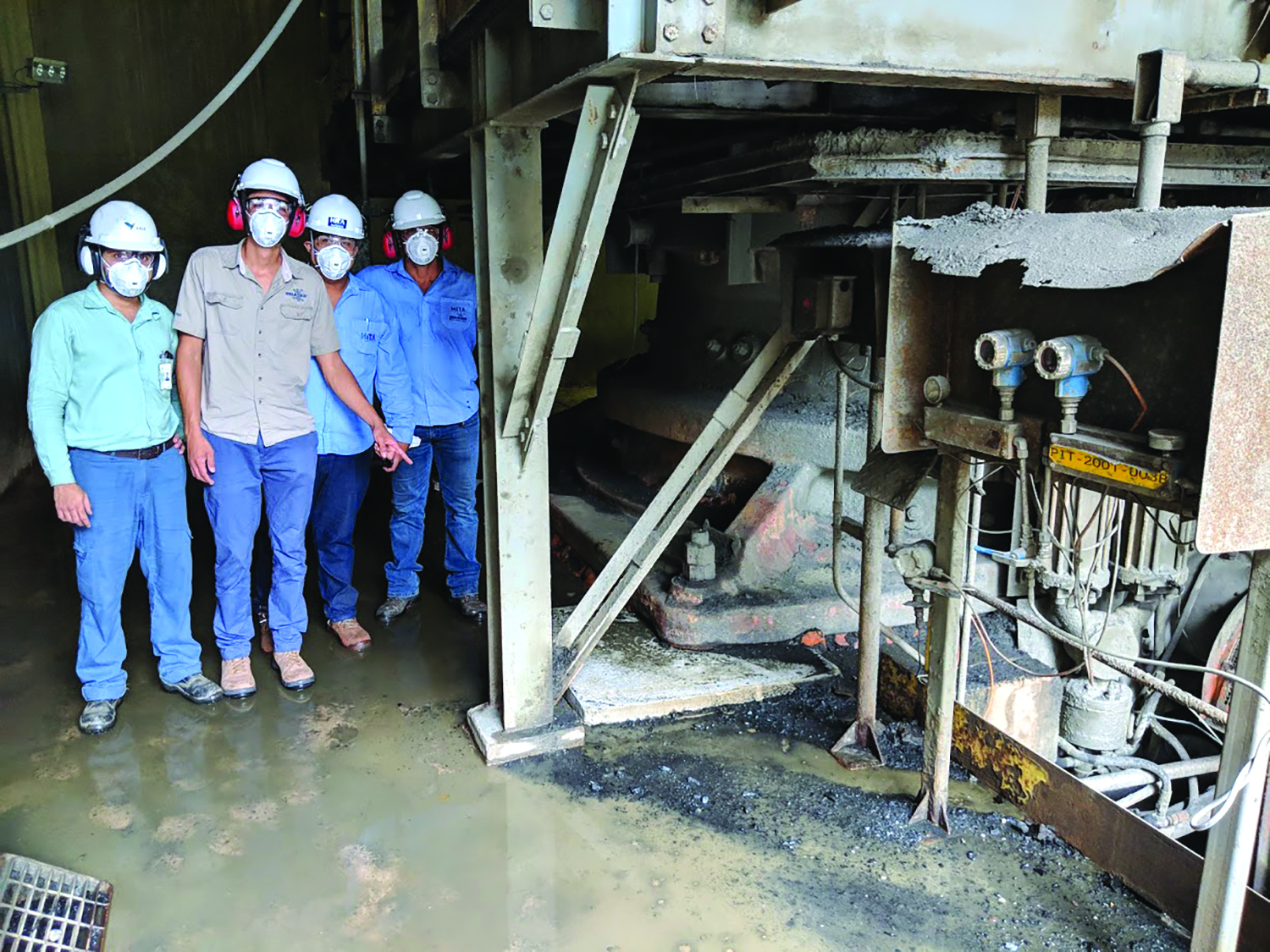 After repairing the support, the crusher was back on-line in approximately 16 hours and it’s still running today.

Another common cause of wear can be vibration. This can cause eventual fatigue, resulting in cracks and a loss of material. Inherent vibration from the operational equipment can cause premature failures in areas such as concrete foundations and their anchoring systems. Generally speaking, concrete can be considered too brittle and weak to absorb such constant impact and vibration transferred from the equipment. Once the concrete has failed, anchor bolts in the foundations can loosen, further aggravating the effects of the vibration on the foundation.

A copper mine in Marabá, Brazil, found this to be the case with their primary crusher. The base of the primary crusher needed to be rebuilt due to it being weakened by vibration. The primary crusher weighs 336 metric tons (mt) and is 9.5 m high and 5.6 m wide, contributing further to the amount of stress being put on the foundations. The crusher processes more than 3,000 mt/h of copper ore. Being one of the biggest copper ore crushers in Brazil, and with copper being traded at around $6,000/mt, every hour of shutdown can result in a loss of millions of dollars.

Continuing under such damaged conditions would have eventually led to serious consequences, including a significant financial loss. A solution was required that could rebuild the foundation and bases of the primary crusher, while being able to withstand high dynamic and impact loads without shattering and breaking. Excellent mechanical properties and a fast curing time were also critical in ensuring the primary crusher would return back to service in as little time as possible. The solution used was Belzona 4111 (Magma Quartz), a high-performance concrete repair and rebuild composite.

Using an impact hammer drill, the first two layers of concrete were removed to reach the steel reinforcement structure. Particularly with concrete repairs, surface preparation is critical in its success. The substrate needs to be free from contamination, free from excess moisture and any loose material needs to be removed. The area was therefore cleaned and degreased with solvent and compressed air was used to remove the entire repair area of loose debris and dust. A conditioner was then applied to ensure an optimum bond between the substrate and repair materials.

The perimeter of the repair area was initially built up, later acting as a mold for a slurry mix of Belzona 4111. The material was able to level evenly to recreate a foundation at the base of the primary crusher. The implemented solution offered resistance to high vibrations and dynamic loads due to its high mechanical strength. The system adhered to both metal and old concrete allowing for a homogeneous load distribution, without weak spots during the anchoring/grouting procedure and service.

The crews began to reassemble the machine in as little as 4 to 6 hours after application and the crusher was restored to full service in approximately 16 hours. 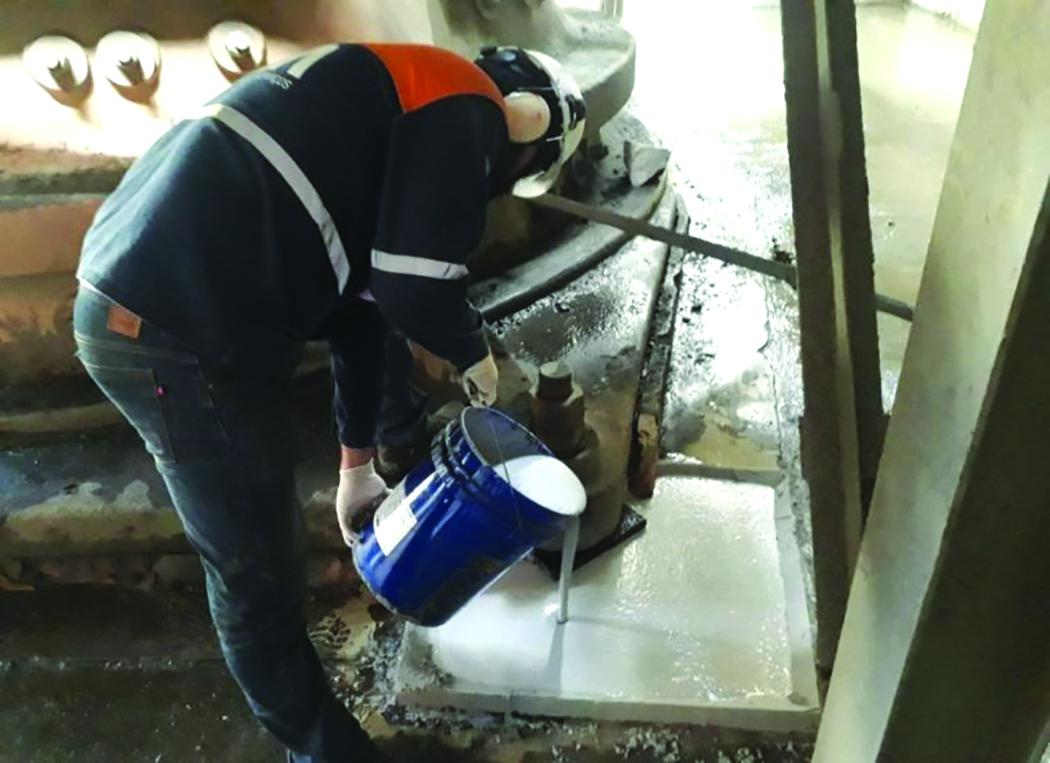 Belzona 4111 is poured into a form to create a new base for the crusher.

Sandvik Additive Manufacturing has created the first ever 3D-printed diamond composite. This super-hard material can now be 3D printed in highly complex shapes.

By using additive manufacturing and a tailor-made, proprietary post-processing method, Sandvik has managed to 3D-print diamond composites, which can be formed into almost any shape.

“On seeing its potential, we began to wonder what else would be possible from 3D-printing complex shapes in a material that is three times stiffer than steel, with heat conductivity higher than copper, the thermal expansion close to Invar — and with a density close to aluminum,” said Anders Ohlsson, delivery manager at Sandvik Additive Manufacturing.

To make it printable and dense, the diamonds had to be cemented in a very hard matrix material. “We are printing in a slurry consisting of diamond powder and polymer using a method called stereolithography, where complex parts are produced, layer by layer, using ultraviolet light,” Mikael Schuisky, head of R&D and operations at Sandvik Additive Manufacturing.

The step after the 3D-printing is, however, even more demanding. This is where Sandvik has developed a tailor-made, proprietary post-processing method making it possible to achieve the exact properties of the super-hard diamond composite.

First Graphene Ltd. recently signed an agreement with newGen to supply 3 mt of its PureGRAPH products to make wear linings used in bucketwheel excavators, pipe spools and conveyor applications for the mining business. Blending PureGRAPH graphene in powder form with existing elastomers, according to Frist Graphene, provides considerable mechanical improvements to the material, including enhanced tensile and tear strength, plus far greater abrasion resistance. It also extends the life of wear liners.

First Graphene sees the worldwide mining and quarrying sectors as important areas of future growth. The company is working with a number of partners to develop new polyurethane elastomers and thermoplastic polyurethane derivatives, to retain and improve mechanical properties while also providing new characteristics such as fire retardancy. 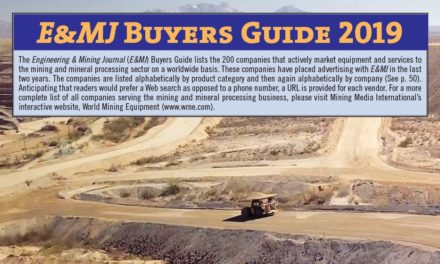 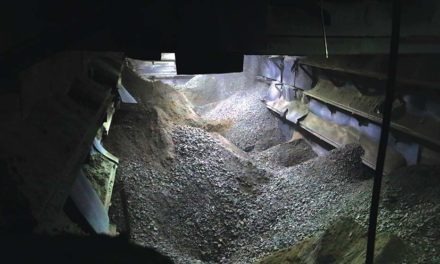