Iron ore mining and pelletizing is big business—in both scope and financial impact—for a number of the world’s largest mining corporations. This certainly includes Brazil-based Vale, where iron ore accounted for almost 60% of operating revenue throughout 2010, making it the largest of Vale’s metals mining businesses which also include nickel, aluminum and copper. And, for Vale, the iron ore stakes keep getting bigger.
For example, the company may spend as much as $11.3 billion to bring the S11D project—the largest iron ore mine in its history—online by 2013, as it positions itself to capitalize on skyrocketing iron ore demand predicted to grow by some 70% over the next five years to reach an estimated 1.7 billion metric tons per year (mt/y) worldwide. The S11D project, located in the Amazon region of northern Brazil, is expected to produce 90 million mt/y of iron ore.

In designing the innovative, modular ore processing facilities for SD11, Vale was faced with the challenge of coping with the region’s wet-season humidity, which potentially could throw a wet blanket over the project’s process efficiency. Although the iron ore in this area is exceptionally high grade, it also produces a large volume of fines—20% to 30% below 150 microns—which can be transformed by high moisture content into a sticky mass that’s almost impossible to screen. Vale initially considered wet-process screening using water sprays to overcome the problem but ultimately rejected that approach as too costly, both in terms of capex investment and environmental impact. In the process of exploring alternatives, it turned to Haver & Boecker Latino-
americana (HBL), which had, to date, supplied about 500 vibrating screens for Vale alone, and in total about 2,000 screening machines for companies such as Codelco, Anglo American, Xstrata, Grupo Mexico and others operating in Latin America.

HBL is part of the Haver Screening Group, which also includes W.S. Tyler Canada and Haver & Boecker Machinery, based in Muenster, Germany. HBL’s long business tenure in the thriving Latin American market—35 years in Brazil—along with its ongoing focus on innovative screening technology, made it a logical choice to become the Group’s center for screening research and development. Consequently, during the past decade or so, HBL has invested strongly in building its screening expertise and capabilities, incorporating sophisticated Finite Ele-
ment Analysis (FEA) software and hiring a large group of experienced engineers to conduct numerical simulations, modal analysis (study of dynamic properties of structures under vibrational excitation), and the extensiometry required for design validation.

HBL also is no stranger to screening applications involving sticky material; it claims to be the largest supplier of vibrating screens to oil sands operations in Alberta, Canada, having delivered more than a dozen units there over the past 10 years. Those screening machines, tasked with processing up to 15,000 mt/h of oil-sand slurry, measure 13-ft wide x 36-ft long and weigh more than 100 tons each.

Starting in 2009, HBL engineers worked with Vale’s project team to design a dry-screening setup that would enhance process efficiencies at S11D. Tests comparing the performance of elliptical-motion against linear motion screens indicated that HBL’s eccentric-drive vibrating screen, providing constant amplitude and circular motion with high material acceleration, would achieve desired results when fed the sticky ore. Subsequently, HBL was awarded a contract valued at more than $30 million to deliver 30 8- x 32-ft double-deck eccentric screens for the S11D project over the course of a year.

Because of the extreme abrasiveness of the hematite ore, HBL recommended a polyurethane media rather than woven wire mesh in order to avoid problems with premature wear or pegging from the sticky material. The screens were fitted with Ty-Wire, a hybrid media product from its sister company W.S. Tyler Canada. Ty-Wire, according to the company, bridges the gap between modular polyurethane and tensioned wire cloth by combining a poly-
urethane composite with wire in a design claimed to last much longer than traditional wire cloth, without a drastic reduction in open area. The screen decks also were stepped to reduce feed caking and to promote better material stratification.

Vale also ordered additional screens for similar applications at its Corumba project in western Brazil and Simandou project in Guinea. In total, HBL has sold 48 of the 8 x 32 double deck eccentric screening machines to Vale during the past year.

Playing Poker
HBL’s stablemate in the Haver Screening Group, W.S. Tyler Canada (WST), recently displayed innovations of its own at the CONEXPO/CONAGG trade show held in Las Vegas, Nevada, USA, in February. Among the products and services offered by WST is its Poker Deck consultation approach to optimizing screen performance by selecting the most appropriate types of media for the three phases of screening:

The premise of the Poker Deck approach, explained WST, is basically: “If there are different screening phases occurring at each location on a screen deck, why use the same screen media at each location?” Optimum screening, through selection of the proper media, in the right sequence, avoids the pitfalls of: 1) missing out on maximum screening performance by limiting effective screening to the upper portion of the deck; and 2) having an excessive amount of undersize particles going over the discharge end. The Poker Deck approach, as illustrated in the accompanying photo, employs a variety of screening media types to alleviate or eliminate these problems.

WST also displayed its TAGG screen line, an economical design primarily intended for the aggregate market.  Standard configuration for the 6 x 20-ft (1.8- by 6.1-m) screen are the size, number of decks and price; with three decks, for example, the TAGG screen retails for $59,999. Careful engineering reduces the weight of the machine and extends the lifespan of key components, according to WST, which claims the TAGG screen is unique within its price point due to its customizable deck configurations, making it the only vibrating screen that can be tailored for a wire cloth, poly-
urethane or rubber media deck setup—and then shipped within five days.

Key design features of the TAGG screen include:

Modular for All
Montreal-based Major Wire Industries said it will start introducing its full line of new 1- x 2-ft Flex-Mat 3 self-cleaning polyurethane modular screen media panels this spring. According to the company, this new screen media size fits virtually any flat-surface screen deck and provides more open area with smaller wire diameters, allowing screening operations using traditional 1- x 1-ft and 1- x 2-ft polyurethane and rubber panels to signifcantly increase existing screening capacity and in-spec material throughput by switching over. Customers can choose from snap, step, pin and grooved types in opening sizes of 30 mesh or 0.020 in. up to 1-1/2 in. (0.5 mm to 38 mm).

The company notes that some mining operations are switching to larger screen boxes to gain added capacity; i.e., woven wire users have switched from 5- x 16-ft to 6- x 20-ft screen boxes, and some modular panel users have expanded from 8- x 20-ft to 8- x 24-ft or even 8- x 26-ft screen boxes. Major Wire suggests producers may be able gain the same or more capacity by trying Flex-Mat 3 first and saving the substantial costs associated with purchasing larger screen boxes.

Also at CONEXPO, Metso said it was preparing to release its new Ellipti-Flo screening system, which will provide complete control of critical screen operating parameters. With the ability to dynamically adjust the stroke angle and force, the Ellipti-Flo range can produce up to 30% more than a traditional banana screen in the same footprint.

The system can handle material that historically has been difficult or impossible to separate, including sticky wet material that would blind a traditional incline machine. The Ellipti-Flo system also features new high-load, bearing-less exciters. Derived from Metso’s mill technology, the new MV exciters, according to the company, offer the prospect of highly extended mechanism service life; the shorter-term benefits are no rebuilds and simple maintenance.

Metso also is in the process of introducing a range of troubleshooting tools for its vibrating equipment. Its IC80 device, for example, is an electronic handheld audit tool allowing for quick, consistent and accurate commissioning and troubleshooting, while a new IC8000 system is designed to be permanently fitted to an item of plant, providing continuous monitoring of its condition, and early warning of problems and potential failures. The handheld tool is currently available; the IC8000 will be unveiled later this year, according to the company.

In a related development as reported in E&MJ’s sister magazine Coal Age earlier this year, Metso is intent upon a strategy to reinstate itself as a major screen supplier to the coal market. “We are trying to reinvigorate the side of the Metso business that serves the coal market,” Scott Snyder, vice president, vibrating product lines, equipment and systems for Metso, told CA. “Metso has re-established a screening machine factory for coal applications in Columbia, South Carolina. We are centralizing production at that facility. We’re in an assembly stage now with a qualified supply chain.”

Snyder said Metso will market a high-capacity screening machine designed specifically for coal prep. “We want to re-establish the brand name in the coal business,” Snyder said. “We will place coal screens in 2011. We are targeting some key projects to prove what we have.” Without providing details, he indicated the new line of coal screens will excel at handling wet material that tends to blind screening media.

The Wide View
Tabor Machine Co., another well-known screen supplier to the coal sector, recently announced the availability of its widest screening machine yet. “During the last several years, we have seen more use of wider screens,” said John Casey, sales and applications engineer for Tabor. “The push now is to 14-foot-wide, or even 16-foot-wide screens.”

In tune with this trend, Tabor introduced a new line of 12-ft multi-slope and horizontal screens in September 2010. For maintenance convenience, Tabor stuck with standardized parts for the new line. “Whether it’s a 12-foot Banana or a 6-foot single deck screen, we are still using the same parts,” Casey said. “The mines won’t have to carry a lot of extra new parts to service the machines.”

One of Tabor’s sister companies, Norris Screen, recently developed a line of modular screen media, the Phase 3 Pinless (P3P) system. “With P3P, Norris has the ability to offer a snap-in woven wire panel or a snap-in perforated plate,” Casey said. “Instead of replacing a 4- x 8-foot piece of woven wire, the  maintenance crews handle a 1- x 4-foot piece. That has a huge safety advantage, especially with sloping decks.”

With the pinless system, Casey explained, maintenance workers don’t have to worry about dropping pins into the underflow or the chute work. They simply snap in the panel and it’s ready. 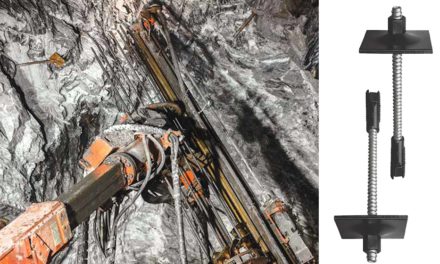 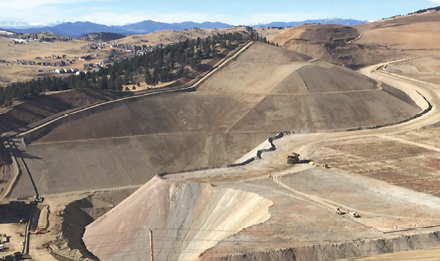 Newmont Repositions and Reaps the Rewards 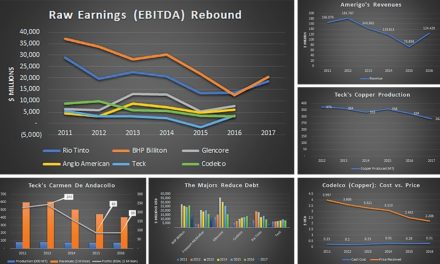