With a little luck, the 33 miners could see daylight sooner than originally expected

On August 5, 2010, the San José copper-gold mine suffered a massive rock failure that trapped 33 miners underground. The mine is situated about 45 km north of Copiapó, Chile. The miners were trapped at approximately 700 m deep and about 5 km from the portal. The mine is owned by San Esteban Mining Co. Rescue efforts were initiated under the supervision of the Chilean government.

The miners tried to escape through a ventilation shaft; but fortunately for them a ladder was missing, because a second collapse on August 7 sealed that access point. Several drills began to bore holes toward locations where rescuers thought the miners might be found. The rescue effort was complicated by out-of-date maps and several boreholes drifted off-target. On August 22, one the boreholes accessed a ramp at 688 m, about 20 m from a refuge chamber. The miners attached a note to the drill bit saying all 33 were alive. Hours later, borehole cameras made contact with the miners, and the world took notice.

The miners had ventured out of the 50-m2 refuge chamber and found much of the old works surrounding them were still stable. They used excavators to dig for water and drained water from radiators. The miners rationed a three-day emergency food supply. According to local reports, for 17 days they consumed two teaspoons of tuna, a sip of milk and a biscuit every 48 hours and a morsel of peach. They used the batteries from a truck to recharge caplamps.

Rescuers began to send supplies to the miners via capsules, referred to as palomas (doves). In addition to high-energy glucose, rehydration tablets and medicine, rescuers also sent down oxygen. Solid food arrived a few days later. Two more boreholes were completed; one was used to supply en- riched oxygen, the second for video conferences. At first, rescuers hesitated to tell the miners the rescue might take months, but they were miners and they knew how complicated the rescue would be.

A court in Chile has frozen the assets of San Esteban Mining. The Chilean government wants the company to repay the cost of the rescue. The company reportedly has liabilities of $20 million and assets of $10 million and the rescue will only add millions more to its debt.

Chilean President Sebastián Piñera dismissed several top officials from Chile’s mining regulator and said he plans a major overhaul of the agency. He then brought several underground mining experts to the site, one of whom was André Sougarret, operations manager, Coldelco-El Tenienté. El Tenienté is one of the greatest underground mines in the world.

An Old Mine Pushed to the Brink
More recently, the copper-gold ores that surround Copiapó have attracted more attention. Higher gold and copper prices have breathed life into several older mines in the area, such as San José. The San José deposit has been worked off-and-on since the turn of the 19th century.

The San José mine was using a sublevel open-stoping method to mine a vein type orebody with a thickness that ranged from 4 to 20 m. Development started at the surface and eventually reached a depth of 600 m. The access to the mine and to the different mining levels is by means of a decline with a 12% grade.

The mine was expected to produce ore at a rate of 25,000 to 35,000 metric tons per month (mt/m). This target required 300 m of drifts to be developed every month and to have two or three production chambers available simultaneously. “The active mining areas were concentrated in the bottom of the mine, between Levels 105 and 44,” said Sougarret. “The levels for development were 105, 90, 75, 60 and 44. The ore was transported by 20-ton trucks from the bottom via the decline.”

Then on August 5, the mountain gave way. “From the information I have, it can be inferred that one of the walls of the stope failed,” Sougarret said. “The stope was semi-filled up to Level 400. At that point, a crown pillar also failed, resulting in a displacement of the wall and the fill contained inside it.” A massive block cuts into the decline at Level 355. Observed from Levels 385 to 230, the inferred block, Sougarret explained, is prismatic with a length of 100 m and 20 m, and approximately 135 m high.

The mine had a network of ventilating shafts around the decline and the diameters ranged from 2.5 to 3 m, placed up to the last level of the mine. “The overall ventilation flowed naturally through the stope and the shafts,” Sougarret said. The 33 miners were trapped deep in the mine and ventilation was probably non-existent.

Initiating a Rescue with Limited Means
The San José mine was a large underground mine with a questionable safety record in a remote part of Chile. “When we arrived on site, we had basic topographic information from the control stations,” Sougarret said. “We didn’t have a database or a 3-D model of the mine.”

Trying to drill and blast through the massive rock on the decline was dismissed right away. “The collapse was massive and the ground is not stable, so any mining activity could generate a new landslide at the upper zone of the mine,” Sougarret said. “It could even extend to the surface.”

Using the information from mine managers and the drill holes, 3-D models of the mine were established. And, the drills began to target the region surrounding the refuge chamber.

Three 5-1/4-in. holes reached the lower works, two of them from the surface to the refuge chamber, and the third hole to a maintenance shop. “The first thing we did was establish audio/visual contact with the miners to learn about their physical condition and health,” Sougarret said. “Then we planned three uses for the holes. The first use would be a way to supply feeding, so we designed 4-inch tubes to send water and food. The second hole was designed as service duct, where we have set a 1-inch pipe to supply air and water on a regular basis with telephone, fiber optics and power cables. We have used the third hole as a guide for widening, which would become Rescue Plan B.”

On the surface, the rescue strategy had evolved into a three-prong approach. Plan A would use a 950 Strata to bore a 66-cm diameter hole, 700-m long at 90º to reach the miners. A pilot had to be drilled first. Plan B involved down-reaming a more narrow hole, using the aforementioned borehole as a pilot. Without the need for a pilot hole, a much larger and stronger drill, the RIG-422, would bore a new large diameter hole as Plan C.

“For the drilling plan, factors such as time of execution, risk of collapse and drilling accuracy were considered design criteria,” Sougarret said. Three points of arrival were defined as the refuge chamber (Level 100), maintenance shop (Level 135) and intermediate ramp (Level 150).

A 950 Strata drill, which was fabricated by RUC Cementation from Australia, was used in Plan A. After the 15-in. pilot hole was broken through, the miners would clear cuttings using an LHD during the second stage of drilling. The expected advance rates were 25 m/d for the pilot hole and 15 m/d for the reaming. Plan A would free the miners by December.

It had encountered a few problems, but nothing major. As of press time, the 950 Strata was stopped at 587 m still drilling the pilot hole.

Plan B used a Schramm T130XD to drill a 12-¼-in. hole using the third hole into the shop as a pilot and then it will be widen to 28 in. The hole would be 638 m at 82º. The advance rate was estimate at 1 m/hr for the 28-in. diameter. The drill struck steel in the underground works and shattered the bit at 143 m. The bit was recovered and drilling resumed relatively quickly. ­As of press time, the widened borehole from the Schramm T130XD was 519 m (82%).

When asked what kind of advice he would offer rescuers who will face a similar situation the future, Sougarret explained it is essential to have a good understanding of what caused the collapse to determine the appropriate actions. “Mines need to have engineering data—the latest surveys, geological and geomechanical information, etc.—organized appropriately on site,” Sougarret said. “The mines should always have a secondary escapeway. Finally, the rescue operation should always have alternative plans.” 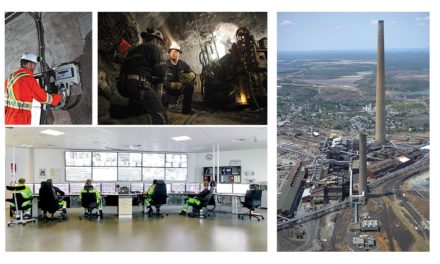 Changing the Face of Mine Ventilation