If the word “massive” hadn’t existed in the English language, it would have had to have been invented to adequately describe conventional open-pit mining of oil sands in Canada’s Alberta province. It’s a high-stakes play with steep entry costs and capital-intensive operational requirements, where ultra-class loading and haulage equipment is needed to maintain high rates of production from sprawling mines, under variable and often extremely adverse weather conditions.

The most familiar end product from the mining and processing sequence—synthetic crude oil—is quickly pro-cessed and shipped via pipeline to refineries across North America for conversion into commercially useful petroleum products. The other end product—huge volumes of tailings—remains on site and has generally been stored in ponds or mined-out pits. Over several decades of oil sands mining, producers have tried a number of methods, such as cyclone separation, gypsum additives and flocculant treatments, to reduce the time it takes for suspended fine tailings particles to consolidate to a level that would allow reclamation of storage facilities to begin—a process that normally takes decades, leading to an ongoing need for extended tailings storage facilities.

Although these ponds have been managed and monitored, their extent—estimated at about 170 km2 of surface area in 2010 by the Canadian Association of Petroleum Producers, containing more than 220 billion gallons of tailings fluids—and toxic ingredients have been contentious issues involving the producers, regulators and the public at large.

The intensity of concern was amplified in 2008, when an estimated 1,600 migrating ducks were found dead in a Syncrude Canada-owned tailings pond, trapped in sludge floating on the surface after landing in an area in which the company’s bird-deterrent systems had failed. A year later, Alberta’s Energy Resources Conservation Board (ERCB) issued Directive 74, which mandated new industry-wide criteria for tailings management and annual reporting on modified tailings plans.

The directive set out new requirements for the regulation of tailings operations associated with mineable oil sands. It specified performance criteria for the reduction of fluid tailings and the formation of ‘trafficable’ (capable of supporting the equipment and traffic necessary to incorporate the tailings into a dry reclaimed landscape) deposits. These criteria, according to the directive’s preamble, “are required to ensure that the ERCB can hold mineable oil sands operators accountable for tailings management.”

To comply with the directive, producers are required to make submissions to the ERCB on how they will meet the new requirements and identify any project-specific constraints that may have a bearing on meeting the requirements. “Requirements will be phased in and adapted, as approved by the Board, to take account of particular mining and tailings plans, facilities, and the status of a project,” according to the directive, and “the ERCB recognizes that fluid tailings management is developing and that operators may need flexibility to apply technologies and techniques that best suit the circumstances of particular projects. The ERCB will consider submissions of operators and will determine project-specific requirements related to the directive.” Under the directive, producers must regularly report their updated tailings management performance to the board, compared with their approved tailings plans.

Reading the Roadmaps
The various alliances appear to have begun bearing fruit: In August 2012, outcomes from the Tailings Technology Roadmap and Action Plan project—another collaboration, this one involving the provincial corporation ‘Alberta Innovates—Energy and Environment Solutions [AI-EES]’ and the OSTC in partnership with Alberta Energy, Natural Resources Canada, Alberta Environment and Sustainable Resource Development, and the Alberta Energy Resources Conservation Board—were released to the public and described as a “comprehensive review of technologies that will help industry identify the suite of technologies that are best for their operations.”

The roadmaps presented in this report focused mostly on tailings processing, tailings deposition and capping technologies. Suncor, for example, had completed more than $1 billion of infrastructure realignment work between 2010–2012 to implement its TRO (Tailings Reduction Operations) process, a technology it has been testing since 2003 that it says will allow the company to convert mine tailings into a material solid enough to be reclaimed in a fraction of the time that earlier technologies require. With this new drying process in place, according to Suncor, it expects to reduce the time it takes from initial land disturbance to having a reclaimable surface to about 10 years—a third of what is now the industry standard.

Implementation of TRO-based tailings treatment, said the company, has enabled it to cancel plans for five additional tailings ponds, and Suncor expects it will be able to reduce the number of tailings ponds at its current mine site from eight to one. The first phase of the tailings-infrastructure projects to implement the TRO process was completed in the first quarter of 2012, with the second phase slated for completion by year-end 2012, and advancement of the TRO process toward full commercial scale operations is well under way with six systems operational, and a seventh under construction, Suncor reported.

Zulfiqar Ali, senior engineer–tailings planning at Suncor, described the TRO approach in a paper presented at the Tailings and Mine Waste 2011 conference held in Vancouver, B.C. The implementation of TRO is based on two primary technologies: mature fine tailings (MFT) drying; and sequential construction of sand dumps. MFT is the classification for fine clay particles, smaller than 44 microns, suspended in water; it is the most challenging component of oil sands tailings when it comes to finding solutions that accelerate particle settling time.

In the TRO process, MFT is mixed with a polymer flocculent, then deposited in thin layers over sand beaches with shallow slopes. The eventual product is a dry material that is capable of being reclaimed in place or moved to another location for final reclamation. This drying process occurs over a matter of weeks, allowing for more rapid reclamation activities to occur.

The tailings with polymer additive will then be deposited in thin layers over sloped beach areas, where freeze/thaw processes and the polymer treatment will then help recover a portion of the water, while the remaining water will evaporate or remain in the resulting deposit. The end result is a clay product that can be reclaimed in place or be placed in mine dumps.

Suncor reportedly spent $250 million to develop the process and although it has, and will continue, to spend millions to construct the estimated 500–600 hectares of beaching areas needed for drying tailings, it figures it will save at least $1 billion over the next decade by using this approach to reduce its need for future conventional tailings ponds. Suncor has patented the TRO process and says it is willing to make the technology available to other interested parties—a step that hasn’t yet taken place.

“What we’re [asking] is, we want to help recoup our R&D costs,” Suncor CEO Rick George told the Toronto Globe & Mail in a recent interview. “That’s a reasonable request.”

Capping it Off
Syncrude Canada, the largest oil sands producer, is moving ahead with several tailings management technologies, which include centrifugation of MFT and water capping among others.

Syncrude plans to implement centrifuging technology in two stages: a first-stage, commercial-scale plant that, at last report, was scheduled to come online by the end of 2012, and a $1.9-billion full-scale plant that will start up in 2015. In November 2012, it awarded Houston, Texas, USA-based engineering company KBR two contracts to execute module fabrication and field construction for what it calls its Fluid Fine Tailings—Centrifuging Full Scale Plant (FFT-CFSP) in Fort McMurray, Alberta.

Syncrude’s centrifugation method is a two-step process. The first step involves MFT dewatering using horizontal solid-bowl scroll centrifuge technology with flocculent addition, forming two streams: relatively solids-free water having 0.5% to 1% wt solids, that can be returned to the water system for recycle; and cake, a soft soil material capturing greater than 95% of the solids. Cake is roughly half the volume of the original tailings. The second step involves subsequent dewatering of the cake—placed in 1- to 2-m-thick annual lifts—by natural processes including consolidation, desiccation and freeze-thaw, delivering a trafficable surface that can be reclaimed.

Syncrude’s water-capping tailings technology involves the placement of water over a deposit of fine tailings to form a lake. Syncrude said it has demonstrated this technology on a pilot scale over more than 20 years of research, including numerous test ponds of various sizes, and is currently establishing a commercial-scale project to serve as a demonstration of the concept. Although the method doesn’t meet the Directive 74 goal of providing a trafficable surface, Syncrude notes that it offers an approach that can result in a sustainable ecosystem that would be capable of supporting aquatic life forms.

After receiving approval from regulatory agencies to move ahead on the commercial-scale water-capping project, located at its Base Mine Lake tailings pond, Syncrude has begun preparatory steps to demonstrate the concept by stopping tailings flow into the lake, removing the tailings piping system, and starting fresh-water inflow from a nearby reservoir into the 8-km2 pit lake. The intention is to allow heavier tailings to sink to the bottom of the pit lake while naturally occurring bacteria consume napthenic acids and hydrocarbons commonly found in oil sands tailings, eventually resulting in a non-toxic environment that is not harmful to birds and can support aquatic life. According to Syncrude, a 5-m-deep layer of fresh water atop the existing tailings fluids is necessary to shield the in-place tailings from disturbances that would inhibit settling.

If the concept is proven successful, Syncrude has plans to convert about half of the 30 or so pit lakes that will exist at the end of mining into water-capped tailings storage facilities. The company will closely monitor Base Mine Lake over the next decade to assess the progress of the project. Apart from the benefit of achieving an accepted form of reclamation if the method turns out to be effective, Syncrude hopes to reap monetary savings from what would be a very low-energy form of tailings management.

Weir’s Mega-barges in Service at Suncor Tailings Project
Weir Minerals Canada (WMC) won an order in early 2010 to supply three Multiflo mega-barges, pictured below, for Suncor’s TRO tailings management project (see accompanying article). This past spring, WMC and its team of contractors completed project construction prior to the hand-over to Suncor for commissioning. The system, says WMC, is now fully operational.

The project is the largest of its kind for WMC, and startup marked culmination of months of effort on the part of several key groups within Weir Minerals. The effort began in the spring of 2010 with the contract to design, fabricate, assemble and launch the three reclaim water barges. A cross-functional team composed of participants from sales, product management and engineering led by the design center team in Mississauga, Ontario, with support from the sales teams in Calgary, Alberta, and Hazleton, Pennsylvania, had worked for months on project elements prior to the award, according to the company. 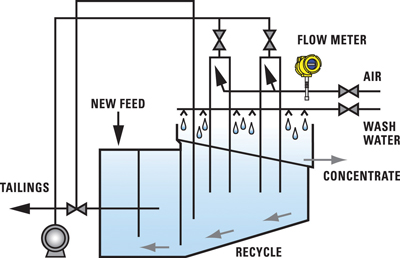 The Growing Popularity of Sustainable Mine Reclamation