Blasting occupies a unique niche in the mine production sequence. It’s probably the only mining phase that requires days of preparation—leading up to an event yielding results in milliseconds. And, the relatively low cost of the materials and labor it requires aren’t a true reflection of its broad impact on downstream loading, hauling and processing efficiency. As mines worldwide search for ways to cut costs without losing productivity, explosives suppliers are finding that, even under the currently dismal state of mining-industry finance and investment, they can make money and improve market share by offering higher-quality explosives, supported by new technologies that allow mines to use these improved products safely and more efficiently.

Determining the Differential
As an example, Dyno Nobel recently released the results from a blasting trial using its new Differential Energy explosives delivery technology. Its Titan ∆E 1000 emulsion was trialed over a period of four months at AngloGold Ashanti’s Cripple Creek & Victor (CC&V) gold mine in Cripple Creek, Colorado, USA.

Measured results, said the company, confirmed that significant value in productivity, cost and blast performance were delivered. The mine reduced its overall powder factor by 18%, realized an 8% increase in shovel productivity in both waste and ore, and in the case of ore, experienced no reduction in crusher throughput. Additionally, Dyno Nobel said the new technology completely eliminated visible NOx after-blast fumes in even the wettest areas of the pit.

The blasting trial was conducted by Dyno Nobel’s joint venture partner, Buckley Powder Co. Over the past 10 years or more, the mine had been using Dyno Nobel Titan 2050G (chemically sensitized Heavy ANFO) and Titan 2070G (chemically sensitized repumpable emulsion ANFO blend). Production drill holes at the mine are 40-ft deep and 6.75 in. in diameter. Burden and spacing varied depends upon geology, which is primarily breccia and Precambrian.

Dave Hunsaker, Bulk Products and Delivery System product manager for Dyno Nobel, said, “Generally, the explosive energy profile in the borehole is limited by product type and physics. Energy distribution varies slightly, or not at all, using traditional methods and products. The differentially gassed explosive emulsion provides a much greater degree of energy distribution without any reduction in pumping speed.”

Performance of the Titan ∆E 1000 product was measured against typically loaded production blasts of similar size, in similar geology. Blast designs (drill pattern and blasthole sequence) for the performance and baseline blasts were unaltered during the trial, and all blasts except one were initiated using Dyno Nobel’s DigiShot Plus electronic initiation system.

Using emulsion and a bulk truck with Differential Energy technology, crews at CC&V were able to precisely load three different density segments into blastholes. The target was to optimize the energy distribution in the holes by putting a heavier density emulsion at the bottom and a lighter density on top. To do this, the bottom, middle, and top segments of the column were loaded with cup densities of 1.18, 1.15 and 1.05 g/cc emulsion, respectively. Due to hydrostatic pressure, the average density of each segment in the hole was 1.26, 1.22 and 1.09 g/cc, respectively.

Using Differential Energy technology, overall powder factor was reduced from 0.82 to 0.67 lb/ton. Limiting higher explosive energy and detonation pressure to the bottom of the hole helped break the toe. Putting a lighter density, lower energy, lower detonation pressure explosive load in the upper portion of the hole improved explosive distribution throughout the rock. This allowed the mine to reduce stemming by 17%.

Shovel productivity, measured in tons per hour, increased overall by 8% as a result of the trial, according to the mine. Concurrently, there was an increase of 1% in primary crusher throughput.

Post-blast NOx fumes were strongly evident when the mine’s normal Heavy ANFO blends were used in damp, unconsolidated rock. According to Dyno Nobel, the Titan ∆E 1000 blasts produced no visual indication of NOx in any areas. The company also pointed out that Titan ∆E 1000’s superior water resistance limits the amount of ammonium nitrate that can dissolve in run-off and groundwater. The Heavy ANFO bulk delivery trucks at CC&V left roughly 6% of the powder around the collar, which can contaminate groundwater. Titan ∆E 1000 eliminated this problem with bottom-up loading.

With Heavy ANFO blends, the mine was required to dewater wet holes before loading. With Titan ∆E 1000 there was no need to dewater. The blaster simply put the hose down to the bottom of the hole and loaded the hole, effectively displacing the water with explosive. This eliminated the need for the dewatering truck and significantly reduced the overall loading time for wet holes.

The customer, according to Dyno Nobel, intends to implement the Differential Energy system throughout the mine site.

Pumping for Profitability
In the first quarter of 2013, AEL Mining Services rolled out new service offerings targeted at its deep-level mining market. One of those services is an underground bulk system (UBS) for narrow reef mining, comprising three main components: bagged emulsions, a sensitizing agent and a pumping mechanism.

A crucial component in this system is the pump—AEL’s PCU010 pneumatic stope pump, which was displayed at the last Electra Mining Expo. “The PCU 010 works by converting chemicals into explosives at the blast site, eliminating the risk of transporting explosives down mine shafts, which, in turn, improves safety, mining logistics and over time, yields costs savings. This is a significant development, especially for the gold mining industry,” said Johan Duvenhage, managing director for gold and uranium at AEL Mining Services.

AEL Mining Services emulsion matrix and sensitizer are loaded into separate tanks in the pump, after which they are combined in the pumping action to form a sensitized explosive product. “A static mixer at the end of the charging hose and lance ensures the final product is well mixed, which produces a consistent quality explosive to improve blast performance,” said Mark Cross, product manager.

Cross noted that the new unit has a built-in bursting disc as an additional safety feature to protect against over-pressurization of the emulsion matrix. “It also has fewer working parts, compared with previous products, which means that minimal spares are required and lead time for manufacturing and maintenance is substantially reduced,” he said.

According to the company, customers will be able to cover an entire mining operation at a relatively low cost by installing a series of these pumps, making it feasible to convert the whole mine to such emulsion units.

Duvenhage said that, in areas where explosives theft is a problem, the system offers an additional benefit: “With the UBS [pilferage] cannot happen, given the in-line mixer and gassing solution is controlled on surface and the product only becomes an explosive once it is mixed through the lance at the stope face underground.”

Setting Perimeter Safety
Another innovative blasting product gaining popularity is Nordex Explosives Econotrim “Buttbuster” line—a perimeter blasting-control product for surface and underground applications. Originally developed by Johnex Explosives of Australia, and exclusively offered in the North American market by Ontario, Canada-based Nordex, Buttbuster is manufactured as a one-piece, custom length, semi-rigid coiled charge, and is claimed to be ideal for rapid loading of perimeter boreholes in surface and underground mines. According to Nordex, it is specifically designed to create smooth walls while providing a safer controlled blast for jobs such as driving development headings and shaft sinking. Among the direct and indirect benefits attributed to the product are:

Nordex recently opened a new facility at its Kirkland Lake, Ontario, operations to produce Econotrim Buttbuster. In fact, demand for the product has propelled the company’s sales to the highest level in its 42-year history, according to Nordex CEO Jim Taylor, who noted that the company had recently received its first firm purchase orders, totaling $750,000, for Buttbuster. Delivery is slated for Q1 2014.

Where are the Mega-ships Now? 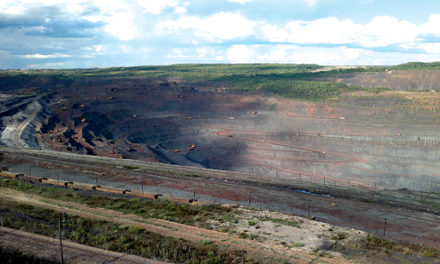