This month, the magazine peers into the 1947 editions of Engineering & Mining Journal (E&MJ), which contain data pertaining to 1946. E&MJ was a respected 80-year-old trade journal and the voice of the American mining industry. The magazine was published monthly with about 200 pages per issue and many of the advertisers were either companies that are still around today or names that would be recognizable by longtime E&MJ readers.

World War II ended in 1945. There was a peacetime lull taking place as the world took stock of what had occurred. From a mining perspective, the effort to satisfy wartime consumption of natural resource culminated in another wave of mechanization. Many of the mines and mills in Europe and Africa were destroyed as the Nazis retreated. Government-instituted controls on prices and labor were being lifted. Knowing the past cyclic nature of the business, but not knowing what lies ahead, the industry was gripped with anxious anticipation.

“To summarize the favorable factors, in 1946 the price controls and other Government restraints which caused widespread dissatisfaction and inconvenience during the war were virtually wiped off the board,” wrote E&MJ Editor Evan Just. “The industry enjoys free markets, almost unbelievable demands for most of its output, unprecedented high prices for peacetime, and substantial alleviation of its labor shortages. The excess-profits tax is gone, and the outlook is for further tax reductions. Labor leaders know that the era of their sacrosanctity is passed and that they are due to be saddled with responsibilities commensurate with their power and privileges. Workers are realizing that the only sound way to improve their lot is through cooperation toward greater productivity.” His foresight about labor’s sacred position ending was spot on.

In 1947, the U.S. Congress would enact the Taft-Hartley Act and override President Truman’s veto. When WWII ended, roughly 25% of the U.S. workforce was unionized and their promise not to strike to support the war effort had expired. One labor leader, John L. Lewis, who headed the United Mine Workers of America (UMWA), which represented the nation’s coal miners, broke that promise. As a response to the rising union efforts and Cold War hostilities, Taft-Hartley was viewed as a response by business to thwart the post-WW II labor movement. Union propaganda often referred it as the Slave Labor Act. The Taft–Hartley Act was seen as a means of demobilizing organized labor by limiting its ability to strike and by prohibiting communists from their leadership. McGraw-Hill used the pages of E&MJ and its other trade journals as bully-pulpits to advise business owners, executives, and managers how to handle the situation and protect their business as well as national interests.

While the war was being fought, the mines and mills along with every other aspect of industry suffered from massive manpower shortages. To overcome these issues, productivity improved through the use of technology. The mechanization process that was well under way began to accelerate. Just as it does today, E&MJ was sharing a wealth of information in addition to offering news and opinions.

A train on the main line waits to be side-loaded by a mucking machine from a draw-point crosscut under a sublevel stope.

Labor shortages, plus absenteeism, and slow delivery of supplies hampered mining companies and mining equipment manufacturers. This situation pushes mine operators toward a greater degree of mechanization, such as automatic-feed drills, jumbos and the more liberal use of mucking machines. The automatic-feed feature can drill 40% to 50% more ore per man. The technology saves time and labor by speeding up the work of backing out of a hole.

More diesel-powered, rubber-tired equipment began to appear underground. Some mines were experimenting with diesel-powered locomotives on the haulage levels. “Bureau of Mines officials, once strongly opposed to employing internal-combustion engines underground, have reversed their opinion as to diesel locomotives, after long study of the reportedly successful use of them in underground mines in Europe,” E&MJ reported. “Putting aside a long-standing prejudice, metal-mine operators are investigating the possibilities it offers of cutting haulage costs.”

Whatever the possibilities that the diesel locomotive may offer for the future, electric haulage continued to dominate the mining picture. The relative position of the trolley and battery types was much the same as it had been for years. Both have their proper fields, the trolley locomotive having been considered best where hauls were long and large capacity was wanted. The battery locomotive was very flexible up to the limit of its ampere-hour capacity. It also made the overhead wire unnecessary.

The miners were drifting with diamond drills and tungsten-carbide bits were improving regular rock drilling operations. “The long-continued evolution of drilling practice has stepped up to a revolutionary pace as certain groups in the mining industry have become aware of the truly marvelous rock-penetrating ability of drills tipped with tungsten carbide,” E&MJ reported. “The new development comes at a time when it will do much good in offsetting the sharp increase in labor costs.”

Belt conveyors, which were traditionally found only on the surface, were being used more underground. “Belt conveyors, having demonstrated their usefulness and economy in open-pit work, not only in the bottom, but where long centers and high lifts are involved in transporting material up and out of the pit, offer interesting possibilities for longer distances underground where a drift can be readily maintained and the ore and rock delivered without damaging the belt,” E&MJ reported. “Recent improvement in belt construction now permits much longer uninterrupted distances between pulley centers with a corresponding decrease in the number of transfer points and motor drives required.”

In the open-pit operations, the stripping procedure was about to undergo a significant change. The capacity of trucks and the size of blastholes were increasing, while the excavating machines, having attained “mammoth dimensions, appear to be ready to yield to the next size larger.”

“So far as we know, the war’s sole direct contribution to mining practice thus far has been the shaped charge,” E&MJ reported. “Learning of the so-called Monroe effect, and having available a returned veteran who had had much experience with the use of shaped charges in demolition work in the Pacific theatre, a Utah company, National Tunnel & Mines Co., set about experimenting with explosives in homemade containers designed to produce and utilize the jet effect that had worked such wonders in destroying tanks.” The results of this test work, applied in secondary blasting and in opening plugged raises, were described in detail.

Mechanized loaders and mucking machines were improving productivity in driving shafts and the development headings. “Never has mucking been so highly mechanized as today,” E&MJ reported. “In all but the smallest mines hand-shoveling is disappearing rapidly. Manpower shortages have promoted the wider and more efficient used of scraping and of mechanical loaders.” Slushing systems, using tuggers and scrapers, were becoming more prevalent. E&MJ reported that scrapers are growing in size, limited by timber clearances and shaft diameters.

“Not only are processes new to milling being applied in the field, but new and less expensive ways are sought of running the old processes,” E&MJ reported. “The combination of high wages and other costs with decreasing grades of ore renders some form of cost-cutting essential.”

Large crushers were being installed with the goal of crushing the day’s grist in one shift. Flowsheets were simplified wherever possible, and larger units (in gravity concentration for example) and simpler circuits have been applied to cut down on individual attention by operators. To make operation easier, mills have been designed with all units on a single level or on two levels. Automatic controls were increasingly applied to make mill operation easier.

Concurrently with the search for cheaper methods, mining companies were seeking cheaper sources of ore, and of course the cheapest of all are apt to be tailing piles. “The development of so-called pre-concentration processes has helped in this endeavor, by using some fairly simple processes such as Sink-Float or Heavy Media, subgrade rock may be converted into suitable mill feed,” E&MJ reported.

Taft-Hartley and the Miner

Immediately after Taft Hartley was enacted in 1947, E&MJ began to offer readers ideas as to how to comply and encouraging them to be truthful with workers. “A mining employer, alert to help counteract misleading union propaganda about the Taft-Hartley Act, will be serving his own and the industry’s interests if he takes time to plan a careful, long-term campaign of employee education based on his company’s special needs,” E&MJ offered.

“There is little doubt but that the first round in the fight over the Taft-Hartley Act has gone to the unions. At swords’ points on almost every other issue, all union leaders are united in one determined effort to smash this law, and their first weapon, propaganda, has been most effective. Their success is evinced in the attitude of workers, as shown by recent opinion surveys. Although they approve in large majority of all but one of the Taft-Hartley Act’s major provisions, workers disapprove of the Act itself. This is almost certainly the result of the ‘Slave Labor Act’ propaganda to which they have been subjected by union leaders.”

E&MJ called for an educational campaign by the management of mining companies. The editors warned that the employers who have tried it testify that the job is not easy and that a one-shot attempt to give employees the truth “may be not only ineffective but even damaging.”

The overwhelming majority of Americans wanted the act, E&MJ explained, “and it is a fair law. These are facts that can be proven to reasonable men. But employees may be in an unreasonable frame of mind, and any campaign of education, however truthful it may be, is a flat, dismal failure if the men refuse to believe it. Management needs to tell the truth, and it needs to be believed.”

Intelligent planning for employee education will be required, E&MJ explained. “One thing in management’s favor is that time, during this lull, is on management’s side; particularly in the mining industry.”

When the Taft-Hartley Act became law, the leaders of the Mine, Mill and Smelter Works (MMSW) knew they must forego use of the National Labor Relations Board (NLRB). “To use the NLRB, they would have to swear that they were neither communists nor sympathetic to communism. After the CIO [Congress of Industrial Organizations] report had named names and dates on their communistic activity, the jig was up,” E&MJ reported. “The MMSW leaders simply couldn’t sign non-communist affidavits, without facing serious penalties.”

The MMSW leaders promptly denounced the NLRB as a new agent of Wall Street and refused to have anything further to do with it. It is also at least part of the reason why the MMSW high command insisted on deleting no ­strike clauses from all new contracts. “The union doesn’t want to be sued for wildcat breaking of such clauses, but it also may need the strike weapon to get the recognition it can no longer get by peaceful, NLRB-controlled elections,” E&MJ reported. “The MMSW must now rely on plain collective bargaining to get what the Government used to give it. Thus they establish, in a roundabout way, the return to collective bargaining.” 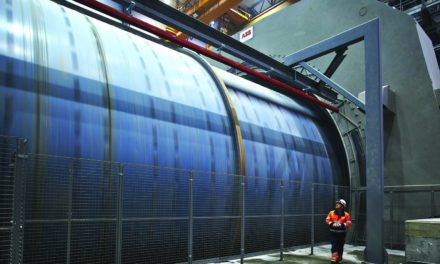 Improving productivity and safety through more efficient separation and leaching

From Dereliction to Inspiration