Working in conjunction with the U.S. Mine Safety and Health Administration (MSHA), the Holmes Mine Rescue Association (HMRA) will host the first National Mine Rescue contest using combined metal and coal rules at the Central Bank Center in Lexington, Kentucky, on August 8. This is the first major mine rescue contest to take place since the onset of COVID-19. “The National Mine Rescue Contest takes place every two years and the nationals were canceled twice since 2019,” HMRA President Jeff Kravitz said. “Normally, we alternate between coal and metal, but this time we are doing both simultaneously.”

The HMRA was created in 2013 as part of the Joseph A. Holmes Association. Kravitz retired from MSHA in 2017 after 43 years with the Bureau of Mines, MESA, and MSHA, and currently leads the efforts. “For the mine rescue contest rules, we asembled a fairly large group to determine whether and how the rules for both metals and coal could be combined,” Kravitz said. “All the rules are now developed by HMRA. Previously, the rules were developed by MSHA with input from the industry. We rely on both coal and metal mining experts in mine rescue from all over the country. We now have much richer set of rules for mine rescue contests.” Readers can learn more at www.holmessafety.org.

MSHA will still judge the contest and the states usually provide officials as well. “We have a more cooperative arrangement than we have had in the past,” Kravitz said.

As many as 100 teams are expected to turn out and the mix will likely be 60/40 coal to metals. The Lexington location will have an obvious appeal to coal operators, but they are also expecting a high level of participation from the metal mining side.

This year is kind of special for mine rescue teams because the U.S. is also hosting the International Mine Rescue Contest (IMRC) during September at the MSHA Academy in Beckley, West Virginia. “We have been working on this since 2019 too and it was delayed twice,” Kravitz said. “We have about a dozen countries, and we are expecting about 700 people including support staff and the International Mine Rescue Body.” 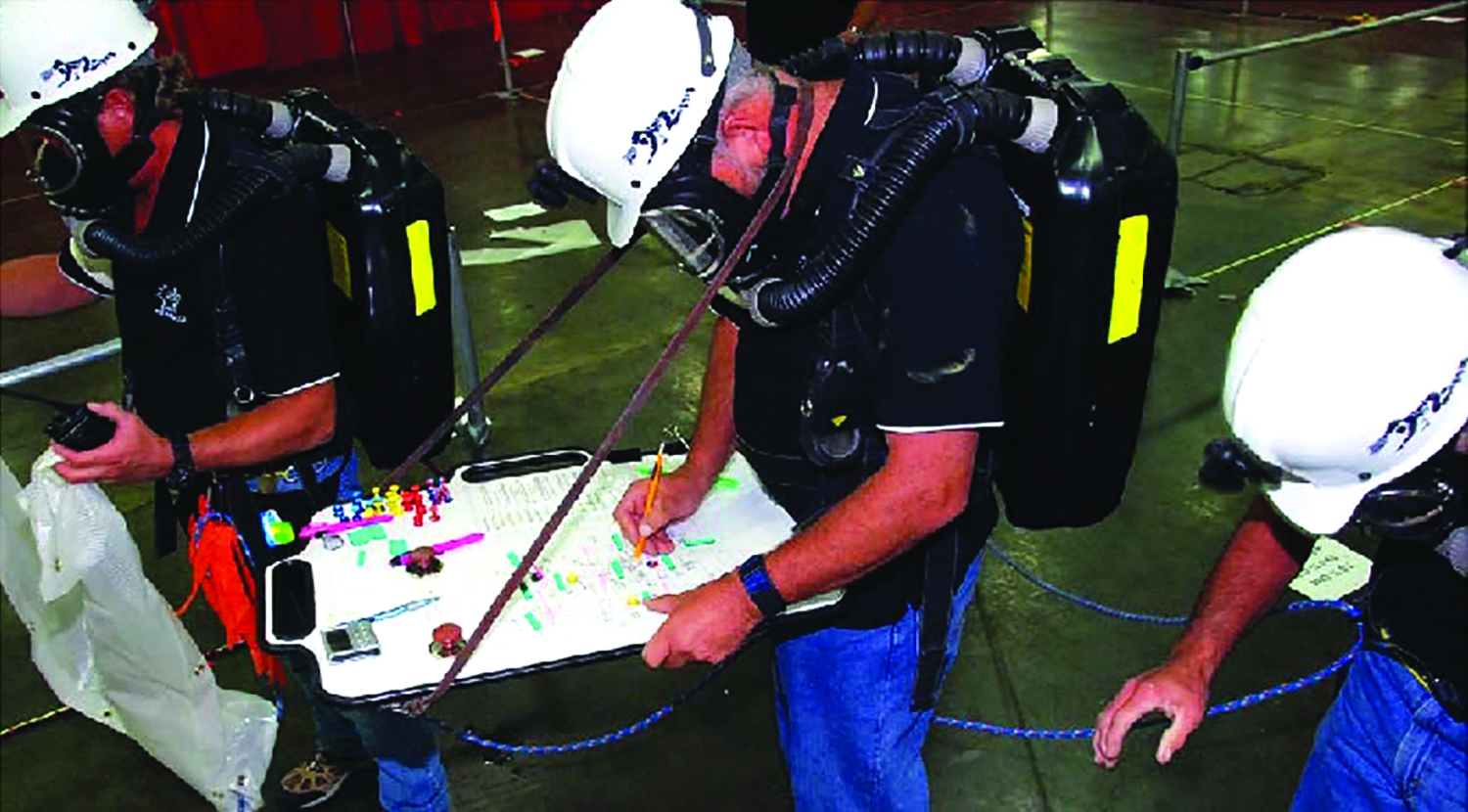 Ontario Mine Rescue working with Draeger and Focus FS develop a system that presents vital information on a hardened tablet (left) and improves the map man’s ability to collect data in real time (right).

Equipment and technology are playing a large role in mine rescue contests. Draeger and Biomarine will have the latest apparatuses. IWT Wireless will demonstrate its communication systems. Several companies are developing new monitoring systems for mine rescue team members.

“All of this will be on display at IMRC,” Kravitz said. “Sentinel Occupation Safety attended our annual conference in Clearwater, Florida, last year and provided some insight into its health monitoring technology.”

Sentinel’s Safeguard system can be used to monitor a team member’s vitals, such as blood pressure and heart rate, and provide real-time feedback. “The Canadians displayed similar technology when they hosted IMRC,” Kravitz said. “This system can monitor the core body temperatures, heart rates and most of your vitals.” 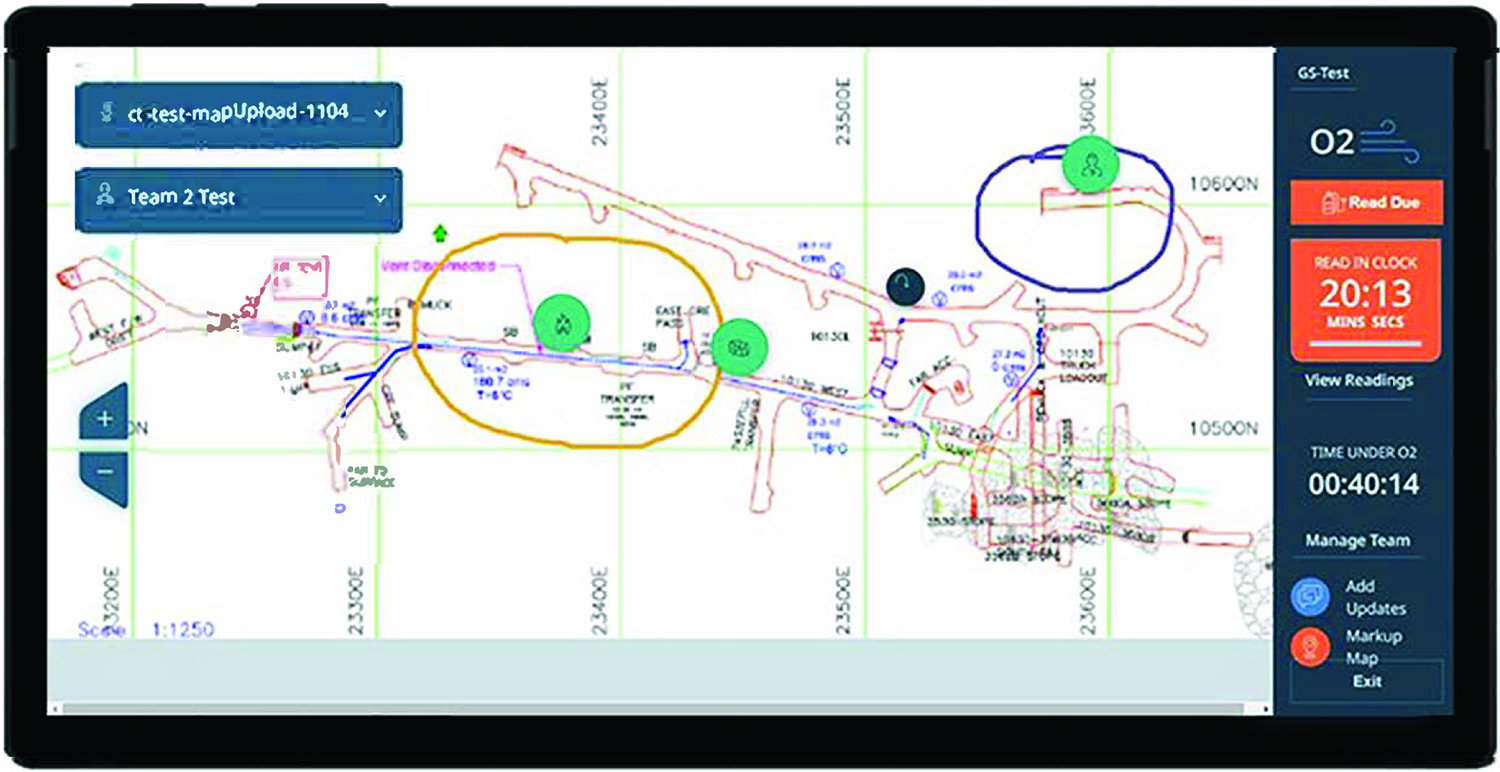 Sentinel Occupational Safety, which was spun out of Aptima in March 2020, was formed around its SafeGuard technology, which uses a combination of wearable sensors, analytics and intuitive software to monitor the well-being of at-risk individuals. SafeGuard gathers biometric and environmental information, then overlays that data with context to determine whether the subject is at risk and reports the subject’s condition in real time.

The flexible, rubber SafeGuard monitoring device measures 50- x 75-mm. For optimal data quality, it must have contact with skin through the use of an electrode.

Sentinel CEO Zachary Kiehl positions SafeGuard as a sensor-agnostic platform, meaning that they can swap sensors as needed for each application. “If you have an Apple watch, you can use SafeGuard. Similarly, if you have an intrinsically-safe, noise dosimeter/gas detector and heart-rate sensor, we can monitor people in an explosive environment too.”

Ontario Mine Rescue operates the largest program in North America with about 1,000 volunteers, and more than 600 Draeger BG4’s in service. Looking to apply more technology for mine rescue teams, they reached out to Focus FS, a St. Johns, Newfoundland-based company that develops software primarily for the safety/industrial market.

Working together, they have developed a system that can be integrated into mine rescue operations, which improves the map man’s ability to collect data in real time and presents it on a hardened tablet. In 2016, the program was presented and tested in Sudbury at the IMRC. Most of the teams were able to use the system proficiently after an hour’s long training session.

“The direction in which Ontario Mine Rescue was heading has sparked at a lot of interest,” said Kent Armstrong, global business development manager for Draeger’s Mining Segment. “Mine rescue teams saw firsthand the potential benefits with real-time data collection, using the tablet’s camera for photos and video, and access to information such as personnel training, equipment conditions and maps. The captain can brief the fresh air base and command and control and dramatically increase the decision-making speeds.”

Ontario Mine Rescue approached Draeger about incorporating the technology. “Our technical people in Germany discussed it and we determined we would partner with Focus FS,” Armstrong said. “For the future, we are looking to add more technology to mine rescue, meaning that we want to make our gas detectors smarter. Instead of taking gas readings and transferring them to the surface by radio or a phone. The gas detectors would communicate with the tablet, which would automatically communicate with the surface. This technology will also be included on next-generation breathing apparatuses.”

Armstrong sees this as the future and Draeger sees opportunities for both closed and open-circuit systems as far as enhancing capabilities.

Ontario Mine Rescue adopted it completely, putting it into service at more than 30 properties in Ontario.

Armstrong has been tasked with supporting it for the Canadian and U.S. markets. “We have seen a lot of activity,” Armstrong said. “We’re doing a lot of presentations and evaluations. We’re loading data on the tablets and rescue teams are using it during their practices. Everyone sees the advantages.”

State agencies are reviewing the system. Draeger ran a demo recently at the Colorado School of Mines’ Edgar mine, which was quite successful, Armstrong noted. “We have also run evaluations underground at several gold operations in Nevada with very positive results,” Armstrong said.

When the dreaded 2 a.m. situation arises, two crews trapped with a mine fire underground, the Focus FS system allows the mine to quickly notify key personnel, access interactive maps, deploy rescue teams, and allocate necessary equipment. When the rescue teams arrive at the mine, the maps are loaded, and all the data regarding the status of the equipment and training is stored on the tablet and ready to go.

The teams can get up and running, and briefed faster, Armstrong explained. “One of the key benefits, if you have connectivity, is the real-time information automatically delivered to the fresh air bases as well as command and control,” Armstrong said. “Another advantage is the photo and video features of the tablet. Team captains can document where they are and what they are doing with video on the tablet, and the fresh air base and command and control can immediately see what the captain is seeing.”

Because the data is stored accurately in a safe place, post-incident investigation will not rely solely on the captain’s memory and the map man’s ability to properly record information. “Today, the map man uses a board, handful of color pencils and Post-it Notes to track progress,” Armstrong said. “We’re eliminating the hassle of looking through printed maps. Now they can just scroll through them on a tablet. If they are in wet conditions, the system works just fine.” 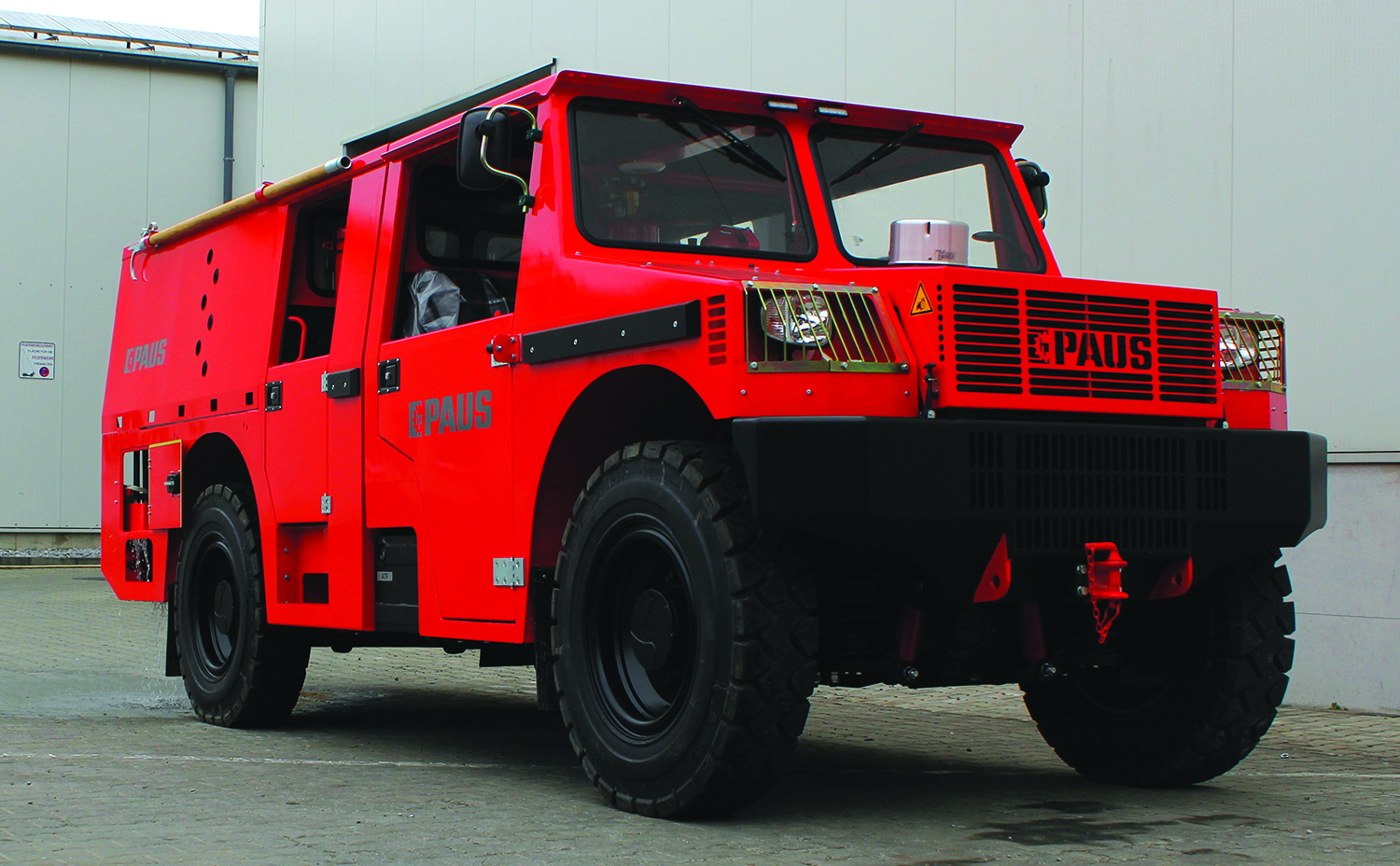 The PAUS fire truck can be equipped with a monitor to extinguish underground fires from a safe distance.

In an emergency, every second counts. Today’s mines are deeper and some mine rescue teams must travel long distances to establish the fresh air bse. To transport equipment and tackle emergencies underground, PAUS offers diesel- and battery-operated mobile equipment for use as an ambulance, fire truck or transport for mine rescue operations.

One of the main chassis in use for the fire truck and ambulance is the MinCa 18 A with hydrostatic all-wheel drive, a mine-duty suspension system, rather compact dimensions and a payload of up to 4,000 kg. Whereas the suspension system provides excellent driving characteristics — just to mention the patient-friendly transport along with the ambulance — the high payload allows the fire truck to be equipped with a proper water pump, a big water tank and additional equipment.

Working with Draeger, PAUS modified the configuration its MinCa 18 A chassis for use in mine rescue operations. The MRV 9000 is a self-contained, mobile solution that moves mine rescue teams as fast and as close as possible to the emergency. The fitness for purpose of the MRV 9000 has achieved by combining the mine proven designs of the basic chassis type MinCa 18 A from PAUS and the life support systems and further technologies from Draeger. The MRV 9000 provides an integrated life support system, which allows mines rescuers to drive and not to walk through contaminated areas while providing safe and clean breathing air in a controlled environment and to further reduce the (life saving) times of their rescue missions.

Draeger and PAUS will soon release its latest development for the MRV with a special focus on innovative firefighting appliances. The UNI 50 series with articulated pendulum steering, comfortable cab for up to three people and a payload of up to 15 tons. The risks of fires from battery electric vehicles using lithium-ion cells will likely require high amounts of water. This can be supported with the UNI 50 chassis. The fire truck could be equipped with a water cannon to extinguish fires from a greater distance. 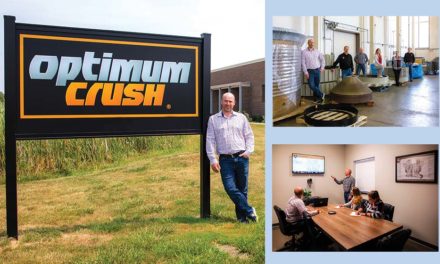 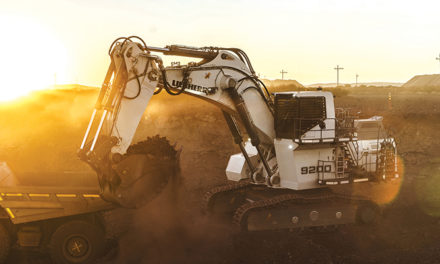 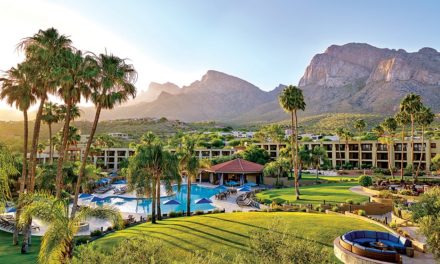