While many companies struggle to contain costs and reduce their environmental footprint, quite a few underestimate the value found in keeping oil clean and dry. Oil is traditionally changed at recommended time intervals rather than when the key features of the lubricant, such as AW and EP additives, no longer function. Removing or reducing the primary contaminants responsible for additive consumption and oil degradation will extend the life of the lubricant and the equipment it is designed to protect. 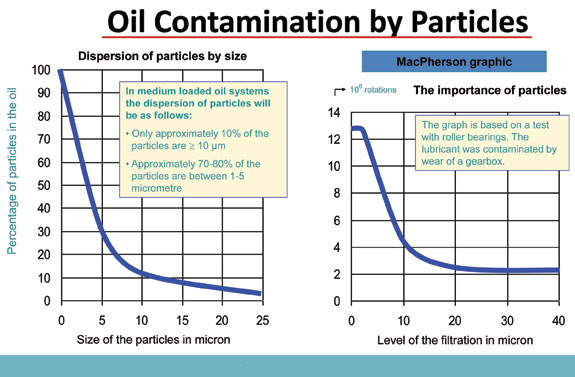 Most oil problems can be attributed to the following types of contaminants:

• Particulates like dirt and wear metals generate abrasive wear and cause machine breakdowns.

• Moisture/water from condensate or process conditions creates micropitting and cavitation, which lead to spalling and fatigue wear.

• Oxidation products like varnish and sludge lead to “sticking” valves and dirty vessels.

In a medium-loaded oil system, research shows that about 70%-80% of the particulates are below 5 microns  (µm) and almost 90% of the particulates are below 10 µm in size. If the mechanical system in question has a clearance zone that is less than 10 µm, these particles get caught in the boundary zone and are slowly ground down until they are small enough to pass through the metal cracks. Elimination of these small particles through effective filtration improves machine productivity exponentially.

In the real world, maintenance teams must balance proactive preventative maintenance opportunities against the constant demands of production and cost of downtime. For large mobile equipment such as a haul truck, the costs of repairing a wheel motor can be enormous, easily exceeding $250,000 per day. If needed parts are not readily available, these costs can quickly skyrocket into the millions. 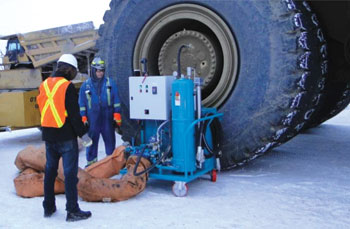 Field tests have proven the CJC Mobile Flushing Unit will quickly clean lubricants from ISO VG 32 to ISO 680+ during routine PM service intervals. Clean oil from the heated reservoir is pumped at approximately 3.5 gpm (800 l/hr) through the gearbox (rear differential, planetary, etc.) pushing contaminated oil back through the cellulose depth filters. The 3 µm CJC MFU Filter Inserts capture approximately 50-60 lb of particulates, dirt and varnish while adsorbing residual water. Oil cleanliness is continuously measured with the online CJC Oil Contamination Monitor. This unit is versatile enough to work in the confines of a shop or the harsh environments found in the most rugged job sites.

The CJC Mobile Flushing Unit has been tested in some of the harshest climates. In one example, Mobile SHC 680 gear oil from a 320-ton Komatsu 930E haul truck was flushed in the field at below freezing temperatures (-4ºC). Within 90 minutes, the contaminant level was reduced from ISO 25/25/23 (>16 million particles at 4 µm) down to an ISO 16/15/11 (<64,000 particles at 4µm). Based on the following Life Extension Table published by Noria Corp. (See p. 86), this will essentially extend the life of the lubricant and equipment by 3.5 times.

When another operation went to fill a new Cat 7495 shovel with oil, they realized the new oil at ISO 23/19/14 was eight times dirtier than the OEM requirement of ISO 19/17/14. Thus, they could not transfer oil to the shovel until it had been cleaned without voiding the warranty. After several attempts to clean and transfer the oil through the on-board filters, a CJC Mobile Flushing Unit was brought in. Each 200-l (52-gal) batch of oil was cleaned to ISO 14/13/11 within 30 minutes and then transferred to the shovel. By pre-filtering the oil with the CJC Mobile Flushing Unit, the company was able to complete the fill process within a week rather than a month as expected. 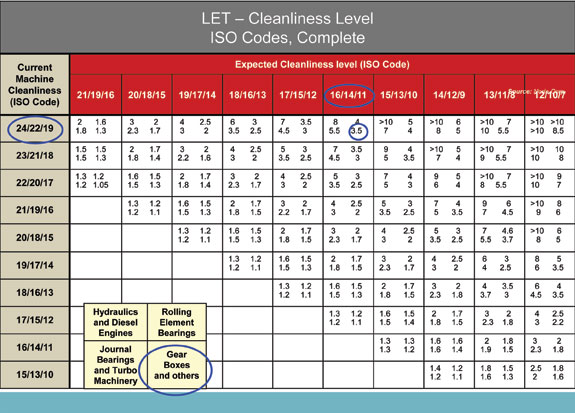 One maintenance group implemented “mini-PM” sessions on Cat 793 haul trucks every 500 hours. Using the CJC Mobile Flushing Unit, they reduced the oil contamination level from an average ISO 22/20/17 (2 million-4 million particles at 4µm) to ISO 17/15/12 (<130,000 particles at 4µm) within the allotted 8 hour PM time frame. Flushing the oil allowed the company to extend oil change intervals from 18,000 hours to 25,000 hours. Using historic operating rates and wheel rebuild intervals, this group predicted that they will save approximately $380,000 on wheel rebuild costs and another $100,000 on reduced oil consumption, labor and downtime annually. 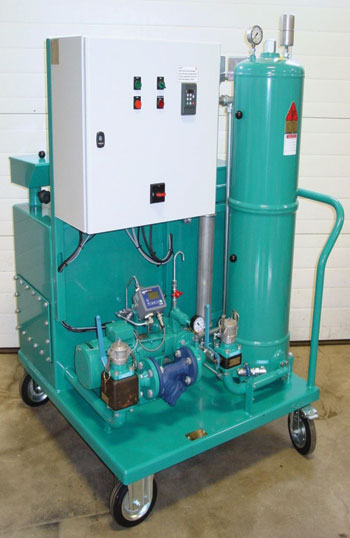 The CJC Mobile Flushing Unit removed 98% of the particulate contaminants from the SAE 60 Final Drive Axle Oil in the planetary/differential gear system on a Cat 797B haul truck within 5 hours. This business unit traditionally changed the oil <2,000 hours at a cost of approximately $15,000 per vehicle. By reducing the particulate contamination from ISO 22/20/15 (2 million-4 million particles at 4µm) to ISO 16/15/12 (<64,000 particles at 4µm), they expect to achieve a life extension on the oil and equipment by 2.5 times. Based on the fleet size, eliminating one or two oil changes per year on each vehicle will generate savings of aproximately $1.5-$3 million, respectively.

These case studies illustrate the value obtained from reducing oil contaminant levels in heavy machinery with the CJC Mobile Flushing Unit. In addition to having a larger dirt holding capacity than most filter elements, the proprietary cellulose inserts are made from a renewable, sustainable resource that can be disposed of in a green manner. Declining oil consumption and the elimination of metal filter canisters from landfills will ultimately reduce the organization’s environmental footprint.

Caffrey is an account manager–mining with C.C.Jensen Inc. This article was adapted from a paper she presented at the Haulage & Loading 2013 conference, which took place during May in Phoenix, Arizona, USA. 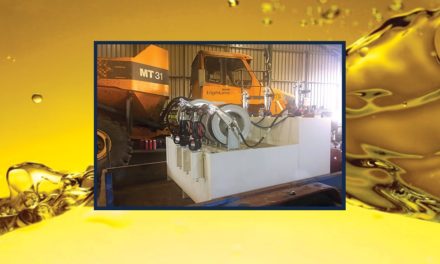