The mining industry demonstrates its commitment to sustainability

Although serious policy discussions unfolded at Rio+20, it concluded without committing nations to any binding targets on sustainability. Many countries were left wondering what exactly a “green economy” meant and many felt the final document lacked detail and ambition. But, despite the lack of commitments, the mining sector shined with examples of continuous improvement in sustainability over the course of 20 years.

In many countries, mining and metals activities are effectively managed to ensure that a positive overall benefit is achieved. But in some countries, resources have been misused and squandered, fueling conflict and political unrest. There have been disputes over land use, property rights and environmental damage, concerns about revenue transparency and corruption, and a growing debate about the distribution of the benefits of mineral wealth. Tensions within communities and regions have often been the result. And, in the extreme, there has been conflict.

Mining is a key contributor to economic growth and improved material quality of life. With its need for both skilled and unskilled labor, its links to regional infrastructure and service development as well as the importance of the products that it produces, means it can make a contribution to sustainable development.

If well-managed, mining and metals activities can provide lasting opportunities for economic growth and development. ICMM believes society must continue to improve the way it extracts, processes and uses metals in order to make a positive, long-term contribution to people and the environment.

Long-term Contributions
At the heart of the concept of sustainable development lies the idea thatany human activity, including mining, should be undertaken in such a way that the activity itself and the products produced provide a positive long-term contribution to human and ecosystem well-being.

ICMM believes the focus is not on how mining can be sustainable but on how mining, minerals and metals can contribute to sustainable development. The industry has a key role to play in capturing and communicating the full value of its mining and processing activities and products. This approach was first championed by the Mining, Minerals and Sustainable Development project in 2002, a project that undertook a far-reaching examination of industry practices and contributed to the decision by leaders in the mining industry to form ICMM.

Mine projects are a source of livelihood and well-being for millions of people. For emerging nations they attract foreign direct investment, domestic investment, foreign earnings and government revenues. At the local level they provide an opportunity for employment, provide goods and services needed by mining activities, and contribute to infrastructure and services in the local community.

Often in remote areas, mining can stimulate local economic activity. However, local social and environmental implications are significant and can result in major socio-economic challenges. When mismanagement occurs (whether by government, company or community), the resulting impact can be adverse and severe. If a perceived or real inequitable distribution of costs, benefits, risks and responsibilities occurs, tensions can split a community, undermine a company’s reputation and at worst, lead to conflict.

While minerals and metals provide a material foundation for contemporary society, they are also a means for transforming current society into one marked by greater efficiencies, lower environmental stresses and more effective public services. Just as the businesses that produced them must be carefully managed, so too should the contribution these products can make to ensure that the benefits from their usage are realized.

Change and Progress in the Mining and Metals Industry
Achieving positive change in the mining and metals industry so it can adjust to its evolving operating environment is a significant challenge for those inside and outside the sector. When managed responsibly and effectively, and in a context of good governance, mining and metals production can contribute meaningfully to an improvement in living standards, particularly in communities directly impacted by these operations.

In the late 1990s, CEOs from some of the world’s leading mining companies launched an effort to reposition the industry in terms of both performance and perception. Faced with a groundswell of public criticism, it commissioned the International Institute for Environment and Development (IIED) to undertake a global review of practices and develop an agenda for strengthening the industry’s contribution to sustainable development. Some 50,000 people from around the world participated in the resulting process that came to be known as the Mining, Minerals and Sustainable Development (MMSD) project. Out of that review emerged an agenda for change to strengthen the contribution of mining, minerals and metals to sustainable development. ICMM was created in 2001 to facilitate delivery of that agenda working with its members and others in pursuit of continuous performance improvement.

From an ICMM perspective, the following 10 indicators highlight how the industry has changed markedly over the past decade.

1. Reporting and assurance: Among leading companies there is now full acceptance and familiarity with annual reporting of performance against sustainable development principles using an independent third-party assured process. There has also been a steep increase in interest on the part of investors in the social and environmental performance of mining and metals companies, as well as the development of initiatives such as the Equator Principles and the IFC Performance Standards.

2. Mining and development: More and more developing and emerging nations are finding that the role of mining and metals in their national economies can be a positive factor, that their dependency on mining and metals for economic strength is growing and that mining and metals can play a key role in addressing poverty reduction and other developmental issues. Companies are accepting this developmental role, though the boundaries of responsibility between company, community and government remains a concern.

3. Revenue transparency: Today’s support for enhanced revenue transparency, as reflected in the commitment by governments, companies, investors and civil society organizations to the Extractive Industries Transparency Initiative, did not exist a decade ago.

4. Human rights: The committed focus on human rights by mining companies has increased significantly in the last decade, and the industry is now considered to be one of the leaders though many significant challenges remain.

5. Environment: Environmental management systems with a substantive focus on performance related to critical issues such as biodiversity protection and water management are now accepted priorities of most mining companies.

6. Health and safety: Clear progress on the introduction of systems that emphasize a health and safety culture. Significant reductions in lost-time injury incidents year-on-year have been achieved as well as similar improvements in occupational health. The industry still faces the challenge of eliminating fatalities in work-related accidents.

7. Climate change: The mining and metals industry’s committed entry into the climate change arena through engagement at the country level by both companies and national associations, regional association engagement in Europe and ICMM’s championing of a generic set of principles for guiding the development of climate change-related public policy, represents a significant change. Closely linked to this is ongoing work on enhancing energy efficiencies, reducing carbon emissions contributing more effectively to local energy needs, and recognizing the role of minerals and metals in a low carbon economy.

9. Full project life cycle, long time horizon: Recognition by the industry, communities, civil society and government to consider the full project life cycle—from exploration through to the long post-closure period—in a mine’s design and financial analysis reflects a major evolution. The impact of this life cycle approach on a project’s technical, financial, environmental and social outcomes remains to be seen. Addressing legacy and orphaned sites is being resolved slowly in most countries.

10. Sustainability footprint and tracking responsible performance across the full life cycle: Initially driven by concerns over illicit support of factions in conflict areas (blood diamonds), the increased interest in tracking performance across the full product life cycle of metal and metal products, has resulted in a strong focus on life cycle assessment. The development of an integrated “sustainability footprint” would not have been considered necessary a decade ago.

Mining and metals operations bring significant change—social, environmental and economic. According to ICMM, its series of publications is recognizing the role of the industry as an agent of change. They begin to describe the design and performance criteria needed to ensure that the net result of the industry’s impact is positive over the long term.

1. Engagement
Are engagement processes in place and working effectively?

2. People
Will people’s well-being be maintained or improved?

3. Environment
Is the integrity of the environment assured over the long term?

4. Economy
Is the economic viability of the project or operation assured, and will the economy of the community and beyond be better off as a result?

6. Institutional arrangements and governance
Are rules, incentives, programs and capacities in place to address project or operational consequences?

7. Synthesis and continuous learning
Does a full synthesis show that the new result will be positive or negative in the long term, and will there be periodic reassessments?

Alcoa Bauxite Mine Reforestation Done in a Natural Way

Alcoa is using a new, natural method for reforestation at its Juruti bauxite mine in Brazil that is efficient, cost effective and sustainable. The technique is based on the theory of nucleation, where small dense nuclei of plants and animals facilitate the arrival of other species. At Juruti, birds and other elements of nature are helping recover the soil rather than traditional reforestation, which works the soil and then plant saplings.

“The nucleation method restores the environment in a short amount of time, leading to greater richness in biodiversity,” said Pedro Pinto, Alcoa Environment, Health and Safety manager for the Juruti bauxite mine. “It benefits the formation of the soil by keeping the micro-environment more humid. This technique also reduces the need for using machinery, resulting in lower use of diesel oil and emissions.”

The natural nucleation approach to reforestation was created by Professor Ademir Reis of Brazil’s Federal University of Santa Catarina. Techniques used include artificial shelters for animals; perches to attract birds and bats, which deposit seeds and help trees to germinate alone; laying out seeds, roots, branches and small tree trunks to stimulate the natural regeneration of species, which attracts animals and creates a food chain in the restoration process; and ecological stepping-stones of small refuges for fauna inside crop plantations.

“The nucleation system is cheaper and ecologically more efficient because it makes the worked areas ‘look for’ its sustainability in a spontaneous way,” said Professor Reis.

The Juruti bauxite mining area is among the first places in Brazil to use the nucleation method of environmental conservation. Alcoa began using the technique last August on a 175-acre (70 hectares) area there. In about two years, the area will have an understory favorable to the introduction of new species, like Brazil nut trees, andiras, trumpet trees, copaibas and others. 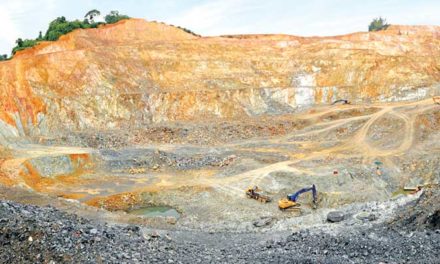