Some of the deepest mines in North America are located in eastern Canada. Many of them have operated comfortably for years in what would be typically referred to as good geology. Today they are experiencing a paradigm shift in rock mechanics as they access deeper ore bodies.

Speaking at a Sandvik customer event during September of last year in Burlington, Ontario, Frederic Langevin, rock mechanics engineer for Agnico-Eagle Mines Ltd.’s LaRonde Division discussed some of the ground control issues the mine was ecountering with its LaRonde II expansion. He explained that mines operating in the conditions encountered at deeper levels will have to adopt an integrated approach to mining because conditions will only deteriorate with depth.

Similar to most gold producers, Agnico-Eagle aims to produce more gold and grow its reserves, while being a low-cost leader. In the case of the company’s flagship gold mining operation, LaRonde, that means accessing the deeper portions of Canada’s largest gold deposit (9 million oz). Already LaRonde has produced more than 3.4 million oz and it’s considered Quebec’s largest gold, silver and zinc producer.

LaRonde operates the deepest single-lift shaft in the Western Hemisphere. The 5.5-m diameter shaft is 2,240-m deep. “It’s a fairly small shaft because it went through a couple of expansion phases,” Langevin said. “The original design was 3,500 short tons per day and today we are currently operating at 7,400 metric ton per day.”

Since the final expansion took place more than five years ago, LaRonde has been operating in a steady-state. The mine has managed to maintain costs at an acceptable level, Langevin explained, despite industry-wide cost pressures.

Agnico-Eagle is currently sinking a new shaft at LaRonde for further expansion at depth, a project referred to as LaRonde II. “This shaft is being driven from 2 km down to 2.6 km,” Langevin said. “To access reserves between the 2.4- to 3.1-km level. And, the orebody does not stop at 3.1 km.” At the time of his presentation, the mine had just reached the 2.45-km level.

The production hoist room–a large excavation at the 2 km–was quite the challenge with ground control and making sure the equipment wouldn’t move, Langevin explained. “Miners not only had to worry about the back, but they also had to watch the floor as well,” Langevin said.

Agnico-Eagle will mine LaRonde II in four different mining horizons (the 260, 290, 302, and 311 levels). “All of the shafts will reach the 287 level,” Langevin said. “The ore will be transported to the shaft by conveyors, which translates into lots of ramping and development work.”

The access strategy for LaRonde II is fairly simple with one shaft situated close to the current ore haulage network, which simplifies ore transfer. From the ore pass [which was being developed at the time], a conveyor will transport the ore to an underground storage silo where it is metered into a shaft skipping station. From there, it enters the existing LaRonde ore transportation system.

“There is quite a bit of overlap between the two operations,” Langevin said. “We designed LaRonde II so that, we can take over from LaRonde, once it s reserves are depleted. That’s why we are re-using the existing infrastructure.”

As easily accessible near-surface deposits are mined out, mines will seek deeper ore. Most mines will be expanding at depth. Mines in Australia are already reaching 1.2 km and, with the stress gradients they encounter, it’s quite a challenge. All mines will be mining in that type of ground some time in the future.

Conditions at depth will influence equipment selection. The two main factors that will dictate equipment selection will be ground conditions and heat stress. “As far as rock conditions, we have to work with what Mother Nature throws at us and sometimes she is not kind,” Langevin said. “At LaRonde we already have a glimpse of the future. The ground conditions in the deeper levels of the mine are considered to be among the most aggressive in the world.”

Geologically, there is a lot of movement at depth. Miners working production headings routinely encounter closure and bulging of the walls. Over relatively short periods of time, cable bolts are simply sucked into the rock mass. “During development, the bolts and mesh are installed in a straight wall,” Langevin said. “In a couple of months, the floor heaves, the back has collapsed, and the ribs are sloughing. We can see as much as 1 meter of convergence in as little as four months.”

Miners often encounter significant seismicity at depth, as much as 2.8 on the Richter scale. “Granted, 2.8 Richter won’t make the evening news, but when you are standing 100 m away, it looks like the end of the world,” Langevin said.

On level 239, which was the deepest operating level at the time, the rock temperature is 36ºC, which is significant. “We’re going to go 700 m deeper with LaRonde II,” Langevin said. “That means 25% more stress, closure, seismicity, and heat.”

Miners that follow the ore deeper will have to start thinking differently, Langevin explained. “Good rock is a thing of the past,” Langevin said. “It will become even more rare as mines go deeper and deeper.” Some of the mines in Canada that were known for solid rock qualities and good mining conditions, such as Kidd Creek and Craydon, are getting so deep that the surrounding rock is starting to behave plastically.”

A clear dichotomy already exists between tunneling and mining. Tunneling can be viewed as a single-face development that remains in use long term and usually commands a large investment in ground control. Mining on the other hand involves multiple headings that may only remain open for a relatively short period of time and would be supported accordingly. “The rift between the two types of development will only widen over time,” Langevin said. “Ultimately, it will become impossible to adapt tunneling equipment to the increasingly difficult conditions that mining will have to face.

“The failure in the rock progresses so fast that by the time the miners finish bolting a round, the back can be crushed up to 2 m,” Langevin said. “That is a lot of failure and extremely dynamic conditions. All of these things have to be considered when developing future mining equipment.”

The solution, Langevin believes, lies in adopting an integrated approach to ground control. “If we can prevent damage to the surrounding rock, we can buy ourselves some time prior to bolting,” Langevin said. “With that in mind, we have introduced perimeter control as a standard development procedure.”

LaRonde’s new development jumbos are T-CAD (computer-assisted drilling) enabled. The blast pattern is input prior to drilling. “It’s not fully-automated,” Langevin said. “The operator still uses a joystick to position the drill, but it’s precise and he has a better idea of what he is supposed to do.” La Ronde is one of the first mines to use this tunneling technology in mining. Two of the development jumbos are now T-CAD enabled. The remaining three will be enabled soon.

The focus for mining equipment manufacturers should be to modify existing equipment or develop new machines better suited to ground conditions prevailing at depth “We need to be able to bolt and scale with the same machine,” Langevin said. “The bolters of the future need to be capable of scaling and handling screen sheets, while protecting the operator.”

Manufacturers will need to engineer specialized mining equipment in partnership with mine operators. Such a partnership has recently been initiated between the LaRonde mine and Sandvik, particularly for bolters.

“The operator’s exposure to ambient heat needs to be minimized,” Langevin said. “We want to move away from the bolting machines we now use, where the operators are standing on a platform totally exposed to the conditions, but the ideal machine does not exist.” Working with the manufacturers, Langevin hopes that they will soon be able to develop a system that enables the miners on development to be the best at what they do. 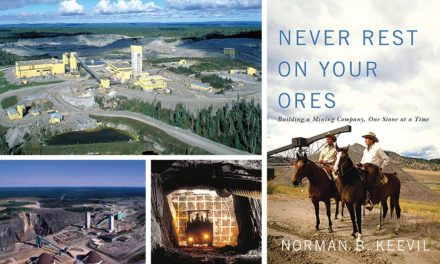 Deep Thinking: Shaft Design and Safety for a New Generation of Mines