At this year’s PDAC trade show, Boart Longyear released its new flyable SC11 rig, touted as the only compact, modular rig in its class that offers 5456 Nm of torque and can manage PQ-size rods. The drill is a surface exploration rig targeted at the 1,300- to 1,500-m NQ market, and can be broken down into manageable modules.

“The SC11 is built from Boart Longyear’s proven LM technology and designed for use in surface applications where access is limited and drill footprint is a critical consideration,” said Craig Mayman, global product manager for capital equipment. “It’s extremely flexible—conveniently assembling and disassembling in flyable, compact modules—and in colder regions, its compact size enables operation inside a drill shack.”

The SC11 was literally built around the engine—a John Deere 4045HF485, 4.5-liter, Tier 3 diesel rated at 172 hp (128 kW)—to take advantage of its high power rating. The SC11 delivers large-diameter and deep-hole drilling capacity with a 132-kN pullback rating and PQ handling capacity. The rig features a variable-speed motor that provides low-end torque output of 5,456 Nm at the head for tri-cone drilling and a 1,230-rpm speed for diamond drilling. The rig also has efficient hydraulics to easily make or break rod joints and transport rods safely.

Hydraulic actuators control the rig’s rod handler, providing movement in three dimensions. The rod handler has proximity sensors to protect the operator by preventing rod drops when operators are nearby. A laser beam system positioned between the helper and rod-handler control panel stops movement when drillers enter the operating area. Once the beam is interrupted, the rod handler immediately stops and can only be restarted when the driller resets it.

The SC11 has been designed to break down into flyable modules, with the heaviest lift weighing 680 kg (1,500 lb), and depending on drill configuration, it is transportable in nine or 11 (with skid base and rod handler) lifts. Lifting points are positioned at the module’s center of gravity to provide a balanced load, while quick-connect hydraulic couplings speed assembly and disassembly and prevent oil spills. All modules utilize visible guides to help operators quickly align and assemble the rig, speeding up the setup process. Pressed steel framing with male-female joints help the modules drop into position and highly visible jacking and lifting points make assembly and disassembly safe and easy.

The SC11 is built at Boart Longyear’s Perth, Western Australia, facilities and units have been field tested in New Zealand and Indonesia.

Monika Portman, Boart Longyear’s product manager for coring products, introduced two recent developments in the company’s core-bit lineup.  A new XP line of surface-set bits includes 11 configurations designed to last up to three times longer than conventional surface-set bits and eliminate the need to utilize alternative bits in broken ground. The company sees the largest market for these bits in the coal sector.

“Our goal was to redefine the surface-set category and set a new benchmark for productivity in soft and sedimentary applications,” said Portman. “Early testing of the new surface-set bits confirms the strength of the engineering and technology applied in their development.”

The new SurfaceSet XP bits feature an impregnated crown with multiple layers of diamonds that are claimed to provide significantly increased lifespan. A patented Ultramatrix crown holds large, synthetic diamonds in place as it continues to cut, compared with traditional surface-set bits that use only a single layer of diamonds.

By delivering better cutting and deeper penetration, the bit’s Ultramatrix design reduces downtime where the bit is not cutting. Hard seams often destroy traditional surface-set bits, forcing operators to pull the rod string out and change bits if ground formations vary at depth. The Surface Set XP bits are claimed to provide a “push-through” capability in hard seams, preventing unnecessary rod trips and enabling drillers to keep their string in the ground longer.

Portman said the company also has upgraded and expanded its Stage diamond coring bit product line. The new bits include engineering upgrades to the Stage3 waterways, a selection of Stage bits with an optional new 16-mm crown and an optional face-discharge feature.

Since its release in 2007, said Portaman, the Stage3 diamond coring bit remains the industry’s tallest, with a crown height of more than 25 mm. Its patented design is claimed to deliver better penetration rates, longer active drilling in the hole and fewer rod trip-outs, increasing shift capacity and overall meters drilled.

“The new design features an expansion of our patented window to improve productivity, a revised window layout to increase strength and also has our new patent-pending RazorCut face design. The 16-mm model includes the upgraded Stage technology and gives customers more choice when operating at shallower target depths.”

Upgrades to the Stage design include windows with rounded corners for greater durability. The new windows increase resistance to damage caused by debris in fractured ground conditions. The windows also feature a new Twin-Taper design; they taper inward to create more material on the window’s inner diameter, increasing material strength and extending product life. In addition, the tapered windows produce high fluid velocity in the inner diameter, resulting in better flushing of fluids, cuttings and debris.

Portman said the Stage windows are now positioned to rotate in the opposite direction of rod rotation, creating more surface material which further increases the strength of the crown and improving performance in all types of ground conditions.

Excore Bits Enhance Efficiency
Not to be outdone, Atlas Copco also introduced a line of diamond coring bits during PDAC, noting that their new Excore bit line is based on the best features of previously successful designs, but offers new design points and matrices to achieve optimized balance between design and metallurgy. According to the company, testing of the bit line before launch was rigorous, with more than 10,000 m drilled in six different markets under varying conditions

One of the Excore design team’s principal objectives was higher penetration rate. As explained in the Excore product literature, when drilling in difficult, broken ground with increased risk of hole deviation or lower sample quality, the driller often must decide whether to reduce weight on bit (WOB) or maintain penetration rate. Lower WOB makes it easier to drill straight holes with higher core sample quality, while at the same time reducing wear on the drill string. However, when rock conditions allow the driller to push for maximum speed, the correct bit configuration for existing conditions is required. The Excore line, according to Atlas Copco, allows the driller to optimize penetration rate vs. WOB for optimal results in any type of ground as each bit type covers a wider range of conditions—resulting in a lower inventory of bit types required for any given drill site.

Each Excore configuration is available in various crown designs, including Extended Channel Flush (ECF) for broken to competent formations, Jet profile for fast cutting in competent formations, and Face  Discharge (FD) design for extremely broken and triple tube applications. Combining these features with different available crown heights, from 10–16 mm, according to the company, providews an Excore bit for every core drilling application.

Atlas Copco provided several case histories supporting its performance claims for the Excore line. At Boliden’s Renströmsgruvan underground mine, for example, core drilling at the 850-m level is carried out by Protek Norr AB, a Swedish drilling contractor. Recent drilling by Protek Norr has been in a zone in which normal diamond drill bit life is roughly 100 m, so when sinking a 900-m-long hole, the driller must pull the drill string out of the hole eight times to change drill bits—adding up to a big loss of productive drilling time.

Atlas Copco’s sales engineer at the mine suggested a test of an Excore with a Jet profile. The first Excore drill bit tested had a service life of 326 m and the best Excore bit in the test had a life of 347.5 m. Overall, testing indicated that the average life of the Excore drill bits was 324 m, more than three times that of the bits previously used by Protek in the same formation.

Similarly, South Africa-based drilling contractor Drillcorp tested Excore bits during a five-month contract involving 46 holes totaling 20,000 m of core drilling at a gold mine west of Johannesburg. By the halfway point of the contract, the contractor was managing to drill about 30 m per shift with an average bit life of 60–70 m while penetrating fractured, troublesome ground. The contractor tested an Excore bit, starting in a hole with 250 m left to finish; normally, a driller would expect to change bits at least three more times for that hole, taking at least 6 hours to run the rods. However, the Excore bit finished the hole without need of replacement and was able to drill another 52 m in the next hole. The first test bit provided 302 m of life—four to five times the life the contractor had achieved with previous bits.

Sandvik’s Strongest Underground Rig
The DE150, introduced in 2009, is Sandvik’s most powerful exploration rig for underground exploration. A surface version of the rig is currently under development, according to the company, and both versions share many of the proven components used by other drill rigs in the DE100 series. In underground applications the DE150 is equipped with a 110-kW (150-hp) electric power unit giving a maximum working pressure of 250 bar (3,645 psi) and oil flow of 300 l/min (79 gal/min). For surface application the DE150 will be powered by a diesel engine. The hydraulic feed cylinder has a push and pull capacity of 15 mt (147 kN), which is exceptional in relation to the weight, said Sandvik. Depth capacity is up to 2,000 m with NQ rods.

The drill unit features a torsion-resistant steel profile feed boom and a direct coupled feed cylinder with a feed length of 1,700 mm and maximum feed speed of 0.63 m/s. The feed boom is mounted on a frame with the tilt cylinder and mechanical supports. The mounting frame has been specifically designed for quick set-up when fan drilling, with a full range of adjustment from vertical down to vertical up.

Sandvik also has designed a drill shack to accommodate its DE130 and DE140 diamond core drills. The modular design of the new Sandvik Drill Shack makes it suitable for both mobile and stationary units with quick assembly/pull down. The drill shack can be packed in compact units and is suited for helicopter transportation to remote areas. It can also be transported in its entirety by tracked vehicles or mounted on a hook lift frame.

All of the modules needed for operating the drill shack are built on an identical platform significantly reducing the number of components. Modules are fastened to the floor by T-rail nuts, allowing easy installation, removal or replacement if needed.

The frame is supported by legs assembled from the outside and easily removed. For operator safety, all hydraulics are located in the frame, keeping the floor free from hoses and oil leaks. The operator workstation has a dry, ice-free surface with built-in floor ducts for heating fluid. The shack’s heating system can be started remotely by a phone call or by a preset timer. The operator compartment shares the same heating system as the rest of the working station, providing personnel a pleasant working environment. Sandvik also offers an air conditioner for applications in sub-tropical areas. Storage cabinets for coring bits and tools and a drill pipe stand that can handle drill pipes up to 6 m are also available as options. 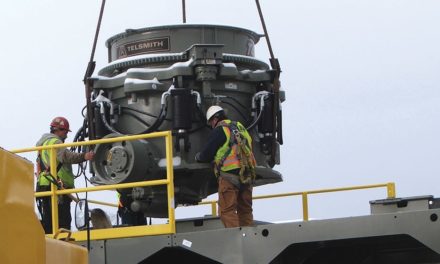 The Case for Trolley Assist 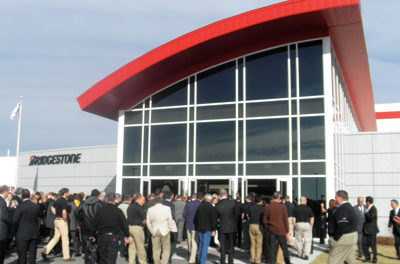 From Aiken County, USA, to the World