Peru is the world’s second-largest producer of copper and the eighth largest producer of gold. Most of the mining operations are in remote, high-altitude locations in the Andes and they are surrounded by small poor communities that lately have been taking action into their own hands.

Mining executives who oversee some of the world’s largest copper mines may be losing what little faith they had in left-wing President Pedro Castillo’s ability to boost the sector, according to a recent Reuters report. Protests by Castillo supporters led to month-long production halts at two major copper mines, Southern Peru Copper’s Cuajone mine and MMG’s Las Bambas mine. While these uprisings have delayed a pipeline of new copper mining projects estimated at $53 billion, mining companies are trying to maintain an open dialogue with the surrounding communities.

That sounds challenging and a bit political, but engineering projects are moving forward at a number of mines. Some of these projects are being completed safely in record time.

For 2021, silver production at Uchucchacua declined 25% from the 5 million oz level and at the end of the year the company decided to make some changes. Production was temporarily suspended, contractors were demobilized and Buenaventura began to invest in an exploration program for the mine. Development work also began at the Yumpaq project, a greenfield silver project, located near Uchucchacua, with a new contractor. The deposit is very similar to Uchucchacua, and will be integrated into it in the future via a tunnel at level 3850.

“We have been progressing as planned,” said Juan Carlos Ortiz, vice president-operations for Buenaventura. “Most of the tunneling has been done to prepare new areas for exploration. We have reached 700 meters (m) per month in development capacity. Now, we will start to split part of that [advance] into exploration and gradually increase the percentage of those 700 m into mine development and mine preparation.

“At the same time, the same management team is taking care of the development of the Yumpaq project,” Carlos said. “It is only 3 km from Uchucchacua. Both will feed the Uchucchacua processing plant in the last quarter of next year. As far as Yumpaq’s mine development, all infrastructure for mining, like ventilation, pumping, offices, camps, shops, warehouse, etc. will be delivered in the second quarter of next year.”

Buenaventura received approval from the Peruvian government for all permits required to begin production at the San Gabriel project during March. Shortly afterwards, community actions began. “We have had two events,” Buenaventura Project Manager Renzo Macher said. “The first one occurred in mid-June. Both of them lasted less than six hours. And, the people were from communities outside San Gabriel’s direct area of influence. We are working with the authorities to open this discussion with each one of these communities. There is no blockade and what we are seeing today is minor delays on preconstruction activities only.”

Buenaventura also had to implement a change to the mine plan sequence at the El Brocal mine, which suffered a landslide that took the lives of three miners during mid-March. The cause of the incident is under investigation. 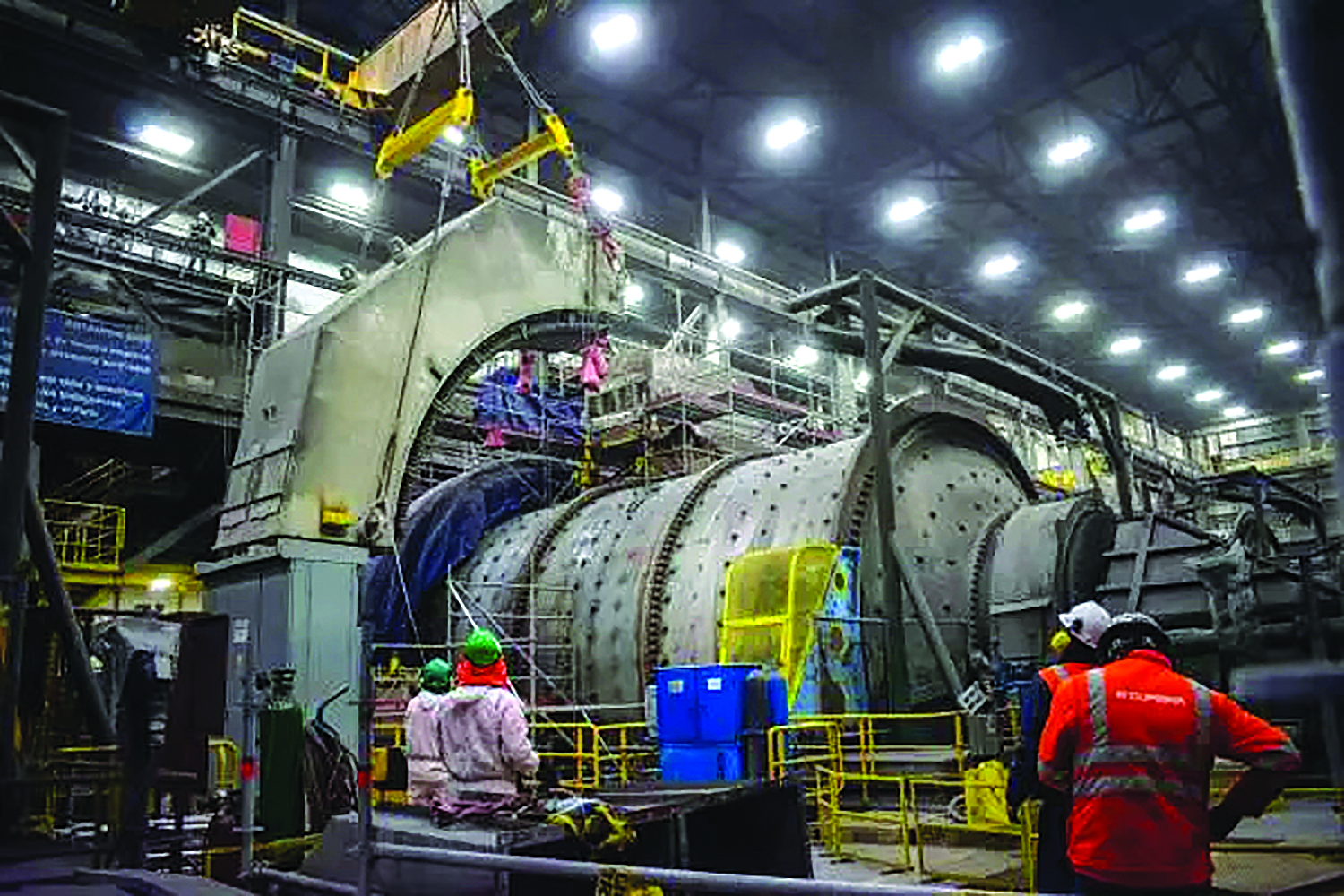 Antamina replaced the stator and E-House on the concentrator’s Ball Mill No. 2 in 23 days.

Boroo Pte. Ltd provided a project update for its Carbonaceous Material Optimization Project (CMOP) at the Lagunas Norte mine in northern Peru. The CMOP processing plant will process about 15 million mt of high-grade gold-bearing oxide ore mined early in the life of the mine. Development includes a carbon classification system (CCS), a carbon-in-leach (CIL) circuit, and a residue filtering plus dry stacking facility. The CMOP construction is being managed as a fast-track pro-
ject under owners’ control by a team of highly experienced construction professionals. The work has been parceled out under different contracts to specialized construction firms from Peru.

More than 1,600 m3 of concrete were poured for the foundations for the ball mill and scrubber in the CMOP carbon classification circuit. The CCS circuit is designed to separate coarse material from the finer fractions of gold-bearing ore that will be milled and processed in the CIL circuit that is currently under construction.

Pedro Reyna, the project manager, reported that he was pleased with “how well the project team safely coordinated over 250 mix trucks on a very tight construction site.” He emphasized the importance of teamwork between the contractor, the Boroo Construction team and site operations in the management of moving all the equipment required for the concrete pours. The project team is most proud of their project safety focus and achieving more than 350,000 man-hours to date without a reportable safety incident.

WSP Golder, the design engineers, have been monitoring the concrete for quality assurance and quality control. The concrete quality has been excellent with all concrete well within the design specification.

The excavation has been completed for the tailings filtration area which will consist of six Metso 2040 VPA filters. The concrete pads for the foundations were started in early July. Structural steel installation was set to begin in early August, including the construction of the filter feed tanks.

Detailed engineering is in the final stages with substantial engineering scheduled to be completed in early September 2022. Procurement of major components are underway with the expectation that all the necessary equipment will be onsite by late November 2022.

The major risk to the schedule, according to Boroo, continues to be global supply chain disruptions, especially for electrical components.

During the second quarter of 2022, Freeport reported that the milling rates at Cerro Verde’s concentrator set a quarterly record by averaging 427,100 mt/d of ore. Subject to ongoing monitoring of COVID-19 protocols, milling rates at Cerro Verde are currently expected to average more than 400,000 mt/d of ore for the second half of 2022. For the first six months of 2022, Cerro Verde produced 478 million lb of copper, a 13% increase over the 423 million lb it produced during the first half of 2021.

During late July, MMG said its copper production was significantly impacted by the community actions that halted production over safety concerns for more than 50 days during the quarter. Production at Las Bambas restarted in June after an agreement was reached with community members to cease protest activities and engage in a peaceful dialogue.

The extended suspension of production forced MMG to lower its guidance for copper production for the year from Las Bambas to 240,000 mt. The company had originally projected between 300,000 and 320,000 mt for 2022. Earlier this year, the Peruvian government approved plans for the company to open a second pit, but they have been unable to move forward with it due to protests from the local community.

The Antamina mine replaced the stator and electrical room (E-House) of Ball Mill No. 2 in a record 23 days. The world average is 35 days. This engineering feat was carried out with no lost time injuries.

“The success can be attributed to a high-performance team that had full and detailed knowledge of the subject, and wisely used past lessons learned to optimize processes and project execution,” said Oscar Ascención Ugarte, Antamina Engineering Manager. “This upgrade will improve the operational reliability and mechanical availability of the equipment for a longer production time.”

Antamina’s first stator and electrical room (E-House) change-out was SAG Mill No. 1 in 2013, which was executed in 35 days. The second change was made with Ball Mill No. 1 in November 2019, which was completed in 25 days. After three years of planning, execution in Ball Mill No. 2 was reduced by two days thanks to the efforts of Antamina’s multidisciplinary work team. 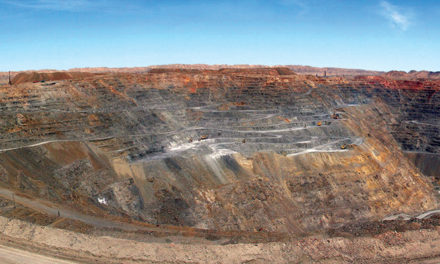