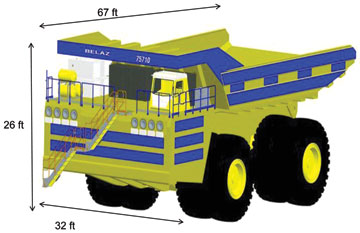 The BelAZ 500-mt haul truck is similar in width and height to competing ultra-class haulers, but longer.

Economies of scale are vital, especially when mining bulk commodities such as coal and iron ore. During early October, a surface mining equipment supplier based in Belarus will commission the largest haul truck ever built. The new BelAZ 500-ton haul truck has already pushed the envelope for ultra-class haul truck design. Building a vehicle with a 450-metric ton (mt) payload capacity is one thing. Developing the power plant to effectively propel the payload along with the weight of the truck (360 mt) up a ramp fully loaded is an engineering feat.

The new BelAZ truck is powered by advanced AC systems developed by Siemens. At Mining Media’s 2013 Haulage & Loading conference, which was held during May in Phoenix, representatives from Siemens with permission from BelAZ discussed the truck’s electrical drive system. Siemens has been developing drive systems for haul trucks for about 15 years, explained Walter Koellner, senior director-mobile mining, Siemens.

“Our first electrical drive system for haul trucks was based on GTO technology working with Liebherr and Hitachi,” Koellner said. “In 2005, we began using IGBTs. In 2007, we introduced a trolley system for the IGBT system. We have built systems to propel 240- to 400-ton haul trucks. Last year, we introduced a combination of the electrical drive and a mechanical spindle. It is installed on a haul truck in China. This year… our next big achievement is the largest truck in the world—the electric drive system we are building for BelAZ.”

The open-pit mining sector has debated whether bigger is better at every stage throughout history. At different points along that timeline, the size of the trucks pushed shovel makers to build bigger units and vice versa. Today, the industry has reached a point where the largest shovels have capacities of 135 tons, which has placed the onus on the truck makers to make the next move to properly match 3- to 4- pass loading scenarios.

The 500-ton BelAZ is noticeably different than current ultra class haulers. The rig stands 26-ft high and it is 32-ft wide and 67-ft long. Roughly the same width and height, but quite a bit longer than the Komatsu 930E or Cat 797, which are roughly 50-ft long. The truck has two axles and eight tires. The drive system consists of two 2,500-hp engines with two alternators driven by each engine. One electrical cabinet controls the inverters and motors. There are four wheel motors.

When BelAZ first presented its idea, Dr. Joy Mazumdar, business manager-mining trucks, Siemens, recalled thinking, “OK…. How are we going to make this thing run electrically? We had an aggressive schedule in bringing this truck to market,” Mazumdar said. “We assessed our options. We needed motors that could drive the system and a suitable control system for this application. We also needed a proper cooling system and braking mechanism.”

Siemens had plenty of experience working with haul truck payloads from 240 tons to 400 tons. The first thought with 500 tons was, let’s just double a 240-ton drive system, Mazumdar said. “That seemed like a fairly straight-forward solution, but the amount of real estate on the truck is limited. We needed to fit more power in a finite space.” 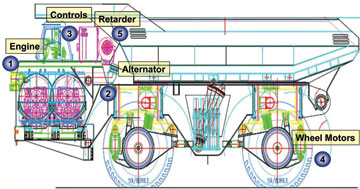 The next approach looked at the 400-ton drive system and the engineers wondered if they could extend the system to handle 500 tons. “The limiting factor was finding the proper power devices as far as semiconductor technology,” Mazumdar said. “Over the years, payloads were increased substantially through the use of IGBTs. We developed a concept, but the devices weren’t available in the market yet. So, while we were working on the software for the drive system in Atlanta, our colleagues in Nuremberg, Germany, were developing the semiconductor technology.”

When it came to the motors, Siemens opted for the 240-ton concept. “All four wheels will have independent motors driven by two alternators with two engines,” Mazumdar said. “That concept is similar to the two times 240-ton truck. When it came to the controls, however, we decided to a use a 400-ton control system, replacing the IGBTs with higher current devices. We needed more current in the same footprint.”

Creating a hybrid system, the Siemens engineers took a 400-ton inverter system and merged it with a 240-ton, motors-alternator arrangement and developed a solution to drive a 500-ton truck.

“For the gridbox, we modified the 400-ton system for 500 tons and the cooling system is similar to the 240-ton system, placed on two separate axles,” Mazumdar said. “Theoretically, this system would work. The Siemens engineering team then tested the concept through calculated simulations to determine the truck’s performance.

The Siemens AC haul truck platform is 1,800-volt DC link. The rated voltage is 1,300 to 1,400 volts. The four new inverters they developed (one for each wheel) were IGBTs rated at 1,500 amps, 3,300 volts. The traditional version was 1,200 amps, 3,300 volts. “The increased amperage made it possible to use the same inverter skid, but allowed more current for the increased torque,” Mazumdar said. “This enabled the solution. Looking at pictures or drawings, the inverter system looks identical to a 400-ton system.”

There were several modifications to the electrical cabinet. Two alternators required more space. There are also two field exciters and extra rectifiers, but all of the additional components could fit into the existing skid.

Siemens uses electrical retarding on all of its trucks with IGBT choppers. The gridbox is similar to a 400-ton system, but it had to be extended to 24 resistors for modularity. Earlier versions have 20. “This truck will not roll backward down grade,” Mazumdar said. “There is no slippage.”

The traction control system has independent control for all four wheels. “That’s a question of coordination,” Mazumdar said. “It has to coordinate the four wheels, two alternators and two engines. It has to have mine grade robustness and at the same time be able to operate in ‘limp’ mode if an alternator or engine goes down.”

The new 500-ton BelAZ truck is expected to be able to travel up a 10% grade with 2% rolling resistance with a speed of 11 km/hr. During retard, it could safely travel downhill at 30 km/hr. Short time braking requires 6 megawatts (MW), regular braking is 5.3 MW. The gear ratio is 29.5.

Siemens has successfully developed a system for BelAZ that allowed them to power a 500-ton truck with the same footprint as a 360-ton truck, which simplified the design of the truck’s power deck layout. E&MJ will have a correspondent at the factory in October and carry a full profile in the November edition as the first unit heads to work at a Kuzbass coal operation in Siberia. 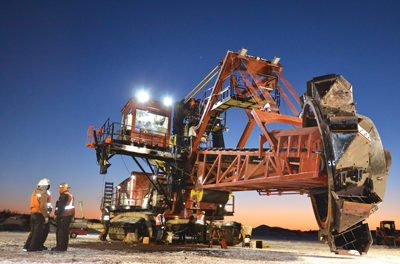 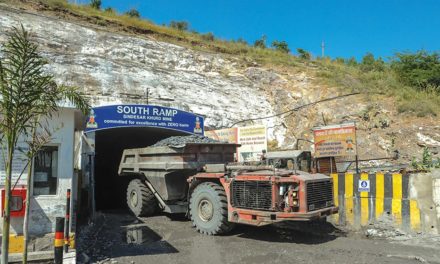 An Overview of Metal Mining in India 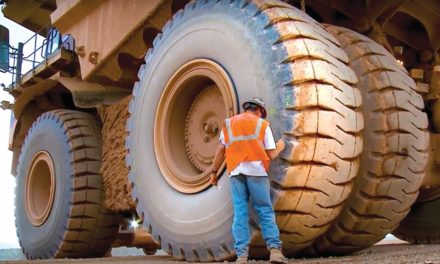 Keep Mine Tires Turning With Something Old, Something New

Is the Ultra-class Truck Dream Dead?