After a period of intense mining project development, driven by increased emerging market consumption of building-block commodities such as coal, copper, and iron ore, the mining industry now finds itself in a period of cost cutting and capital preservation. Between 2005 and 2015, mining firms worldwide constructed and started up more than 1,230 greenfield mines representing total investment value of $265 billion. The mining boom, which included greenfield mine construction and expansions of existing mines, really peaked in 2012, but significant spending for major mining projects continued in 2013 and 2014, albeit at a lesser rate, as large projects that had started in earlier years reached peak construction.

In 2015, construction activity at mining projects worldwide declined by 50%, based on the total investment value of projects when compared to a year earlier.

According to Industrial Info’s Global Mining Project Database, at the beginning of 2014, there were 1,228 mining projects totaling $636 billion under construction worldwide. This includes any significant capital expenditure of $1 million or greater, including greenfield mines and mine infrastructure, as well as mine/plant expansions, additions, modernizations, upgrades, etc. By the end of 2015, the number of mining projects under construction had increased to 1,731, but the total investment value had declined to $320 billion.

GREENFIELD PROJECTS ON THE BACK BURNER
Given today’s market conditions, the magnitude and type of projects being developed going forward will be different, at least for the next year or two.

Mining companies, for the most part, are shelving large greenfield projects and are focusing on productivity optimizations for newly developed assets, as well as brownfields, expansions of existing assets, in-plant capital and environmental spending. Project timelines will be slowed down and stretched out during this period. 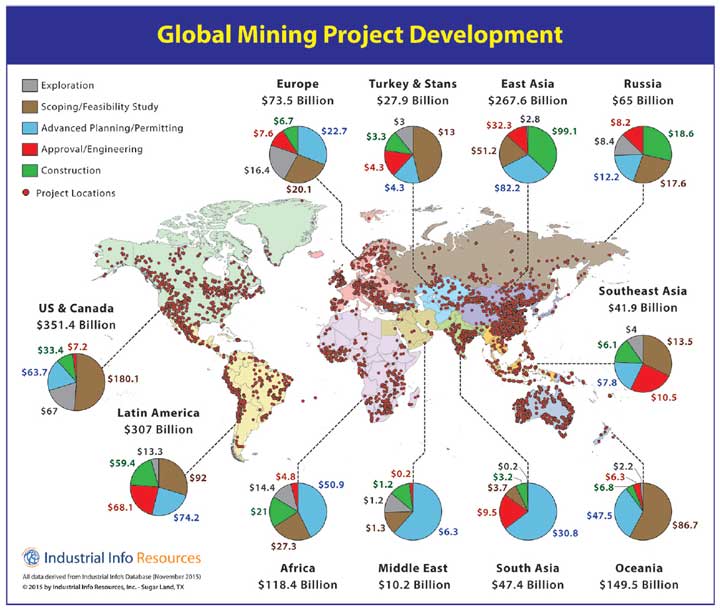 While the majority of greenfield project activity, especially mega-projects, is being shelved or delayed indefinitely, a small amount of greenfield activity will continue during this period. Companies will need to replace capacity lost from mines due to depleting reserves and declining ore grades. Newmont Mining is a good example of this: Construction started earlier this year on the $293 million Long Canyon mine, the company’s next gold mine in Nevada. The mine will utilize the heap-leach process to recover 150,000 ounces per year (oz/y) when it is completed in late 2016.

In one of the biggest announcements for a country that’s been battered by the decline in commodity prices, Rio Tinto will begin construction in 2016 on the $1.9 billion South of Embley bauxite project in Queensland, Australia. The project involves an open-pit mine, processing plant, diesel power station, water pipeline, sewage treatment plant, and rail and port facilities. The project will initially produce about 22.5 million tons of bauxite per year when it starts up in 2019, and it will replace capacity lost from the depleting Weipa mine. Bechtel is providing engineering, procurement and construction management services for the project.

NEW COMMODITY PRICE PARADIGM
Most of the major mining firms are slowing down production to conserve resources during this period of low commodity prices. Layoffs, mine closures and project delays, which proliferated in 2015, will continue in 2016 as the industry continues to adjust to the new low-price commodity fundamentals. Most major mining companies will reduce capital expenditures in the range of 20%–25% in 2016. Freeport McMoRan, for example, has announced capex reductions of 25%, and Glencore Plc announced a 24% cutback for 2016. Large, low-cost producers such as Rio Tinto and BHP Billiton will fare better in 2016, while smaller and high-cost producers and junior mining companies will suffer the most. The current mood in the mining industry is to “batten down the hatches,” conserve cash and resources, and weather out the storm—the storm in this context being muted demand and low commodity prices for most metals, including copper and iron. Miners have taken notice and started a series of cost-cutting measures. 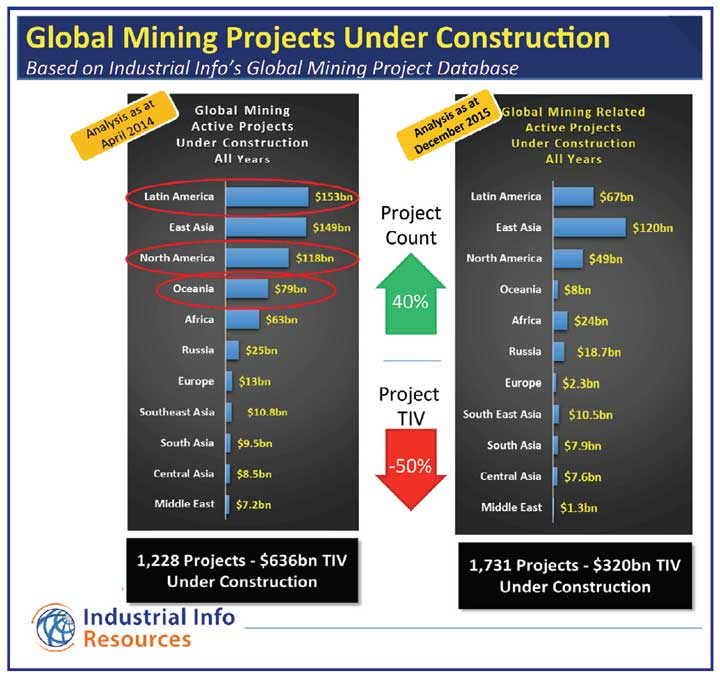 WHEN WILL COMMODITY PRICES REBOUND?
Instead of a rebound in 2016, it appears that the industry may be on a more extended correction, with slow sporadic growth over the next two to four years as commodity prices stabilize and rebound.

When it comes to commodity consumption and subsequent mining project development, China cannot be ignored: It consumes 40% to 50% of the world’s commodities, including aluminum, copper, nickel, zinc, lead, coal, iron ore and steel. But China’s appetite has waned. Double-digit GDP growth in China has given way to 6%–7% growth projected through 2017. China’s growing urban population boom and the subsequent build-out of infrastructure, commercial/residential construction and energy-related projects has slowed. That’s why countries like Australia and Indonesia, which rely on China for a good portion of their iron ore and coal exports, are currently reeling from the slowdown in demand and subsequent commodity price deterioration.

Not only is China a major importer of these commodities, but also a major miner. China is now the second-largest country for active mining project development after Canada. While near-term prospects for mining project development remain challenged at least into 2017, long-term growth prospects for the consumption of commodities remain positive, especially in the emerging economies where demand is expected to grow.

India is expected to eclipse China as the GDP growth leader with 7% growth expected in 2016, and it is in desperate need of infrastructure. If India can solve corruption problems and a lengthy permitting process, there could be growth in mining project development in that country. State-owned coal miner Coal India recently announced that it would build an additional 15 coal preparation plants near its mines in India.

There’s growing activity in African countries, which have emerged as a destination for mining projects to supply metals and minerals to Asian countries. Both China and India are investing heavily in mining projects in Africa. For example, China-based Zijin Mining Group, the largest miner of gold and second-largest miner of copper in China, recently acquired 49% of the Kamoa copper project in the Republic of Congo.

Right now, mining firms are developing $118.4 billion in active projects in Africa. South Africa continues to be the mining epicenter in the continent, with 156 projects totaling $32.9 billion. In addition, significant projects are being developed in Congo, Mozambique, Guinea, Tanzania, Namibia and Botswana, to name a few.

In Ethiopia, Norway-based Yara International is proceeding with plans to construct a $740-million potash mine using solution mining technology. SNC Lavalin has recently received the award for the front-end engineering design, as well as engineering procurement and construction management.

Like other metal commodities, iron ore prices have dropped to 10-year lows and are predicted to remain low. New capacity coming online, like the Roy Hill mine in Australia, certainly won’t help the situation. China’s steel industry, which has experienced phenomenal growth over the past 10 years, is in overcapacity. The country has started to remove some inefficient capacity, but much more will need to be removed to remedy the situation. This doesn’t bode well for iron ore suppliers, which have added significant capacity in recent years.

The big iron ore producers, such as Rio Tinto and BHP Billiton, continue to expand in Australia at a reduced pace. At a time when new iron ore mines don’t appear feasible, Rio Tinto is studying its next iron ore mine in Australia, the Silvergrass project, and could select an engineering, procurement and construction management firm in early 2016.

COAL THRIVES OUTSIDE THE U.S. AND EUROPE
China is the world’s largest coal producer, producing four times as much as the U.S., which is the second-largest producer. India, Australia and Indonesia round out the top five coal producers. Worldwide, coal mining firms are developing more than 3,000 projects totaling $394 billion. China accounts for 53% of the value of coal mining projects under development worldwide. Australia, India, Russia and Poland round out the top five countries for coal mining project development.

Coal has taken a hit in the U.S. and Canada due to a combination of low natural gas prices and environmental regulations that has expedited deterioration of the coal mining industry and discouraged future growth, in spite of the fact that coal will supply around 30% of U.S. power needs in the foreseeable future (down from about 50% just a few years ago). What is needed to save coal mining in the long term is development of revolutionary new clean coal technology that is economically feasible. Carbon capture technology has yet to achieve that milestone. In Europe, many countries are turning away from coal as a fuel source. The U.K. has announced plans to close all coal mines by 2035.

But while new coal mine development is bleak in North America and parts of Europe, elsewhere it is thriving as countries look to capitalize on the inexpensive abundant and secure energy source. China is consolidating its coal mines. India is developing as many coal mines as it can and has been increasing imports of coal to satisfy growing demand.

Copper mining companies, including Codelco, Freeport-McMoRan and Asarco LLC, a wholly owned subsidiary of Grupo Mexico, continued cost-cutting measures in 2015. Freeport McMoRan shuttered the Miami mine in Arizona and reduced output at other mines, including the Tyrone mine in New Mexico and Climax Molybdenum’s Henderson mine in Colorado, as well as mines in Chile, Congo and Indonesia.

Freeport McMoRan will continue to operate the Miami copper smelter, which receives concentrate from several copper mines in Arizona. The company had previously decided not to proceed with a $450 million smelter environmental upgrade and expansion, which now has been reduced in scope to encompass the environmental improvements only. A decision on whether to proceed with the project will be made in early 2016.

Asarco indefinitely shut down the Hayden concentrator and curtailed production at the Ray mine, both in Arizona.

Chilean copper miner Codelco announced similar cost-cutting measures at its operations, including suspension of new hires, and is also re-evaluating expansion plans at its mines in Chile. Current projects under construction are being extended over a longer period of time. Codelco recently announced it will cut its five-year capital expenditure program by about $4 billion, from a previously announced $25 billion to somewhere between $21 billion–$22 billion. During the down market, the company will stretch out major expansions at its mines in Chile.

In 2016, mining companies will continue to battle low commodity prices by conserving capital and metal resources, and shifting focus from large greenfield or expansion projects to smaller incremental expansions and productivity optimizations at existing mines, in an effort to improve profitability in the near term. Long-term plans for organic growth will continue, but at a more conservative pace as the industry waits for demand/commodity price improvements. 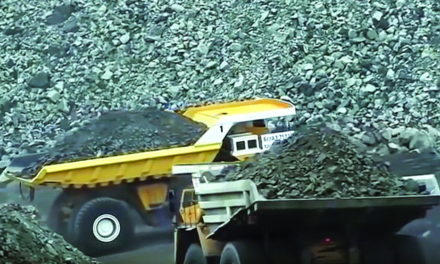 Can Diesels Meet the Challenges of Alternative Power Technologies?