A 15-month project provides 5,100 mt/h of copper ore at Africa’s largest copper mine

Tenova Mining & Minerals announced in late November that its bulk materials handling and equipment company, Tenova TAKRAF Africa, formerly Bateman Engineered Technologies, successfully executed its contract for the design, supply and installation of the conveyor system that feeds copper ore from the newly developed Chimiwungo pit at the Lumwana copper mine (LCM), to the existing process plant. LCM is an open-cast mine in the North West province of Zambia, situated 220 km west of the Copperbelt and 65 km west of the town of Solwezi. It is considered Africa’s largest copper mine.

With the development of the new Chimiwungo pit, LCM now has two operational mining pits, that have the capability of simultaneously feeding ore to the existing process plant. Ore is currently being delivered on the new belts, as mining at the copper project moves out of the lower-grade material in the Malundwe pit, into the new Chimiwungo pit.

Equinox Minerals, acquired by Barrick Gold Corp. in July 2011, originally awarded the contract in April 2012. The scope of the project included the design, supply, delivery, erection and commissioning of the conveyor system, which comprises a 300-m-long sacrificial conveyor, a 3.4-km-long overland conveyor, and a 500-m-long conveyor feeding the process plant, at a design capacity of 5,140 metric tons per hour (mt/h). The scope of work included all mechanical and structural equipment, including the transfer towers and chutes, with Tenova TAKRAF’s area of responsibility for the project ending at the interface at the top of the civil foundations. Electrical and C&I work was carried out by various other suppliers.

According to Tenova TAKRAF, the ground profile along the intended conveyor route required several special design features to ensure that belt tensions are maintained. Additionally, a river crossing also had to be negotiated on the longer overland conveyor route.

Tenova TAKRAF was also responsible for project management, engineering, all support functions including procurement, inspection, logistics, construction site and safety management and commissioning, and the company notes that the project was completed in accordance with established standards and targets. “We believe in a shared responsibility for health, safety and the environment from all employees, contractors, customers and the communities associated with our business operations,” said Philip Le Roux, Tenova TAKRAF Africa’s business development manager and manager for the Lumwana project.

The construction team spent 10 months on site in a tented camp. A local Zambian company, Karlsons Consulting Engineers and Project Managers, was responsible for erection under Tenova TAKRAF’s supervision, while the steel structures and most of the mechanical equipment—pulleys, drives and belts—was sourced in South Africa and trucked to Zambia. Total project duration was 15 months.

“The biggest challenges on this project were the logistics and an aggressive project program, specifically with construction taking place during the monsoon season in Zambia,” said Le Roux. “Transportation of materials and equipment in a large number of trucks from South Africa to Zambia called for great management focus and logistical control. Everyone worked together as a team, resulting in us overcoming various logistical challenges, however, not without some headaches and lessons learned along the way.

“One of the biggest lessons you learn when working in Africa, is that there is very little tolerance for making mistakes,” said Le Roux. A small mistake can quickly amount to a large impact on the cost and schedule because of the remoteness of sites, specifically when it comes to the supply of steel and equipment.”

Bateman Projects, now Tenova Bateman Projects, in a joint venture with Ausenco, was responsible for the original contract to establish the Lumwana Copper processing facilities, which were handed over to the client at the end of 2008. When the Malundwe pit approached the latter stage of its life, work began on the Chimiwungo pit to supplement ore feed to the processing plant.

Tenova TAKRAF, a global supplier of equipment and systems for open cast mining and bulk handling, has provided hundreds of complete systems, as well as individual machines, to clients all over the world in all climatic conditions. 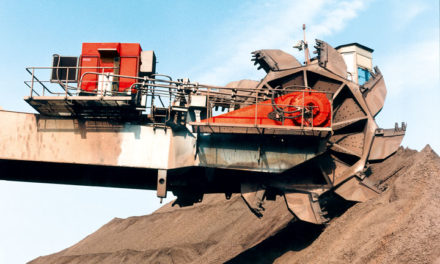