A recent ruling passed down by the SEC has producers and manufacturers alike wondering if they’ll have to file a new report form, what they’ll need to include and how much it all will cost

As the final weeks of a long, hot summer in Washington, D.C., drew to a close and with both Congress and the general population focused intently on the upcoming national elections in November, the U.S. Securities and Exchange Commission (SEC) finally dropped the other shoe, issuing a rule concerning the use and reporting of conflict minerals that had been two years in the making.

On August 22, SEC Chairman Mary L. Shapiro announced the commission had proposed and adopted a rule mandated by a 2010 financial reform law to require companies to publicly disclose their use of conflict minerals that originate in the Democratic Republic of the Congo (DRC) or an adjoining country.

The conflict minerals are tantalum, tin, gold and tungsten, and in addition to the DRC the other countries involved include South Sudan, Uganda, Rwanda, Burundi, Tanzania, Malawi, Zambia, Angola, the Republic of the Congo and the Central African Republic.

The Dodd-Frank Wall Street Reform and Consumer Protection Act, passed two years ago, directed the commission to require companies to disclose use of conflict minerals if those minerals are “necessary to the functionality or production of a product” manufactured by those companies. Dodd-Frank included the disclosure mandates because of widespread concerns that the exploitation and trade of conflict minerals by armed groups is helping finance conflict in the DRC region and is exacerbating ongoing humanitarian crises.

In making the announcement, Schapiro said, “We have received significant public input on this rulemaking, and in response we incorporated many changes from the proposal that are designed to address concerns about the costs. I believe the final rule faithfully implements the statutory requirement as mandated by Congress in a fair and balanced manner.”

Although the early consensus is that the final rule is less potentially burdensome than the original proposed rule, the SEC estimates that thousands of companies will be impacted by the rule and that as many as three-fourths of those companies will be required to submit a Conflict Minerals Report (CMR). And, although private companies are not directly subject to the conflict minerals rule, they will be indirectly affected to the extent that they are part of a public company’s supply chain.

Foreign companies may be affected by the rule if they become involved in the securities markets of the United States. In explaining how the rule was developed, the SEC staff wrote: “…we are not exempting foreign private issuers because we do not believe that it would give effect to Congressional intent of the provision. As commentators noted, exempting foreign private issuers could make it difficult for [companies] to compel their foreign suppliers to provide conflict minerals information, result in a competitive disadvantage for domestic issuers, and hurt conflict minerals supply chain transparency.”

Some guesses place the number of private companies that could potentially be affected in the hundreds of thousands, ranging from small enterprises to large companies. The Brookings Institution, a D.C.-based think tank, pointed out in a 2011 report that the U.S.’s National Association of Manufacturers has estimated compliance costs would range from $9 billion to $16 billion. The SEC’s own compliance estimate is much lower, at $71 million.

Creating the Challenge
Jim Low, a partner with audit, tax and advisory firm KPMG and the leader of the company’s Americas’ Financial Services Center of Excellence, issued some useful general comments on the rule adoption in the days following the SEC’s announcement.

According to Low, approval of these rules creates a challenge for many companies whose products or suppliers use or are exposed to the conflict minerals in the manufacturing process. Companies will need to have a much better handle on their supply chains, tracing the use of these minerals to the raw materials from the mines or the smelters.

At most companies, according to Low, C-level executives are handling compliance, with the corporate board and the CEO driving strategy. Since conflict minerals reports may be subject to an independent audit that would be included in a company’s public filings with the SEC, it is expected that a company’s SEC reporting group will take responsibility. But, the compliance process could typically involve at least four corporate departments: supply chain and procurement, legal counsel, finance, and the internal audit group. The head of sustainability or corporate social responsibility may also be involved in companies that have such a position. In addition, given the requirement for an independent audit of the conflict minerals information, the audit committee of the board should be fully engaged in the same way as with other audit requirements.

Low said most executives KPMG had spoken with believed it will take at least two years to implement compliance fully. Under the rules, starting in 2013, companies will file the new report, Form SD, by May 31 covering the reporting period from January 1 through December 31, irrespective of a company’s fiscal year.

Indeed, part of the controversy surrounding the ruling and its announcement, apart from its potential impact on corporate competiveness, compliance and reporting requirements, was the long delay in producing the final version, which had created an atmosphere of uncertainty among businesses and organizations that operate within, or are trying to avoid, the shadow of possible conflict minerals involvement.

As the U.S. Government Accountability Office (GAO) pointed out in a report released July 16, 2012, “…various stakeholders have developed initiatives that may help covered companies comply with the anticipated rule, but some initiatives have been hindered by SEC’s delay in issuing a final rule. Industry associations, multilateral organizations, and other stakeholders have developed global and in-region sourcing initiatives, which include the development of guidance documents, audit protocols, and in-region sourcing systems. These initiatives may support companies’ efforts to conduct due diligence and to identify and responsibly source conflict minerals. In the absence of SEC’s final rule, however, stakeholders note that uncertainty regarding SEC’s reporting and due diligence requirements has complicated their efforts to expand and harmonize their initiatives.”

In its defense, the SEC countered by noting that “intense stakeholder interest and input” had necessarily slowed the rulemaking process. Originally, the comment period was to end in January 2011 but the SEC extended it to March 2011. Officials also noted that, in response to requests from some external stakeholders, the SEC hosted a roundtable on the conflict minerals disclosure rule and re-opened the comment period until November 1, 2011.

SEC officials further noted that it had continued to receive input and cited more than 400 distinct comment letters. In addition, SEC officials said that approximately 140 meetings between the agency and external stakeholders, along with the complicated and technical nature of the issues, and the effort required to consider and address these issues in rule making, also contributed to delays.

What Does it Mean to Miners?
So, if it’s possible to reduce these complicated issues to practical terms, what does the rule hold in store for mining companies? Dan Edwards, CPA, manager of business advisory services in the Denver office of Hein & Associates, specializes in technical GAAP and SEC advisory services and also leads the firm’s mining practice area. He offered the following preliminary analysis of the ruling.

“The SEC won’t require mining companies to disclose whether they mined tin and gold in African conflict countries. However, manufacturers will have to make such disclosures, and will likely require their suppliers, such as mining companies, to make the same disclosures,” according to Edwards.

The SEC ruled that mining is not manufacturing, but it does not give mining companies a free pass from the disclosure of conflict mineral requirements, Edwards commented. “The de facto regulation of mining companies through the supply chain will require a complex analysis of that chain and an audit paper trail to prove to manufacturers that they aren’t supporting the killing of innocents in the Congo and other war-torn African states. Manufacturers of commonly used devices, such as smart phones and electronic notebook pads, use the so-called 3 T’s and G—tin, tantalum, tungsten and gold—in their manufacturing process. They are sensitive to a supply chain tainted by even any possible support of warlords who sell hundreds of millions of dollars of these minerals every year.”

Based on a small sample of conversations with mining controllers and CFOs, Edwards said it appears there is little understanding of this regulation. Several CFOs were unaware of the topic while others were very concerned about what and how they will have to report to their customers. Here’s how it is likely to work:

Conflict minerals include cassiterite (tin), columbite-tantalite (tantalum), wolframite (tungsten), and gold (the “3 T’s and G”) that originated from the Democratic Republic of the Congo or adjoining countries. Affected companies will be required to disclose descriptions of the products manufactured, or contracted to be manufactured, that are not DRC conflict-free; the entities that conducted the independent private sector audits in accordance with the standards established by the Comptroller General; the facilities used to processes the conflict minerals; and the efforts to determine the mines or locations of origin with the greatest possible specificity.

But, noted Edwards, even though mining companies publicly traded in the U.S. will not have to make the disclosures required by the Dodd-Frank Act—since mining companies do not ‘manufacture’ the minerals and metals that they ex-

tract—compliance by SEC registrants in the manufacturing industry will trickle-down such that companies which do mine the conflict minerals will have to have procedures in place to help prove to those manufacturing companies that the minerals and metals contained in their products are conflict-free.

Winning the War Against Wear 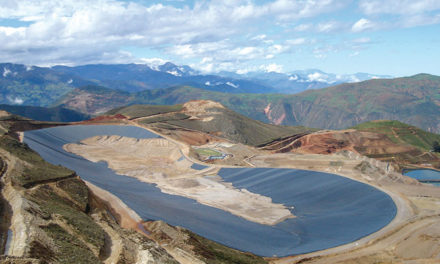 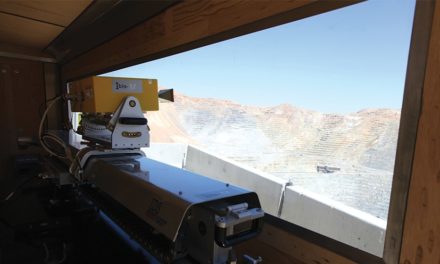 Slope Monitoring in the Spotlight