Water has long been the go-to ingredient for controlling fugitive dust from haulage and other mine operations. Its increasing scarcity and cost could open a path for other, more cost-efficient types of dust-suppression products and methods.

For the mining industry, dust and water are important, costly commodities that generally lie at opposite ends of the desirability spectrum, yet they’re often closely linked by quantitative concerns: Too much of either can cause major problems leading to higher operating costs and reduced productivity.

For most mining operations, water is an essential ingredient in dust control in the pit, on haul roads and at dump, crusher and conveyor transfer points. Dust control at concentrators and other types of process plants involves fans, electrostatic precipitators and baghouses, all of which can be significant energy consumers. With the industry in general having to compete more frequently with other interests for dwindling available water resources, and mineral producers becoming more interested in reducing their emissions/carbon footprint for cost and social-responsibility benefits, dust and water are linked by another set of quantitative concerns: How to reduce the existence of one and the need for the other, in a manner that makes economic sense.

As always, manufacturers are integrating improved technology into the latest versions of their dust suppression equipment, offering the potential for better performance and lower costs. At the same time, the growing value of water for non-industrial uses is prompting specialty chemical suppliers to develop more efficient and environmentally friendly dust suppression products. And—although they haven’t been developed specifically for dust control—new products for land reclamation, rehabilitation and site access provide opportunities to avoid dust generation in the first place. Here’s a sampling of recent developments:

In the Pit
Mega Corp., an Albuquerque, New Mexico, USA-based builder of custom truck bodies, tanks, trailers and other specialized mining and construction equipment, has begun offering a new version of its Digital Spray Control System (DiSCS). Mega said it has delivered more than 100 units with DiSCS—which it launched in 2013—and had gained a great deal of customer feedback for the product. Based on that information, it implemented several key features and improvements into the new version of DiSCS and had begun to deliver machines with the latest release.

The original DiSCS system offered a self-contained package that was adaptable to a wide variety of machine applications. The spray control system utilizes a PWM (pulse width modulation) strategy to automatically limit the amount of water consumed based on vehicle speed while maintaining road dust control coverage. Utilizing the PWM strategy avoids the addition of complex and costly variable flow hydraulic systems and the resulting impact on machine reliability. Additionally, the GPS-assisted system does not require connections to other vehicle systems to determine speed.

DiSCS V1.5 spray systems are available for installation on most new Mega machines as well as for retrofit to a wide variety of existing and older machines. The V1.5 systems are backwards compatible with V1.0 with a minimum of modifications; the original water pump, spray head, water cannons and other spray system gear are unchanged.

The latest version of Mega Corp.’s Digital Spray Control System for water trucks has new features that improve system safety and effectiveness. It also can be retrofitted to most of Mega’s older models, with minimal modification required.

In the Plant
FLSmidth A/S and Haldor Topsoe A/S recently announced a cooperative agreement aimed at commercializing a new particulate-catching filter bag technology. According to the two Denmark-based companies, the product—catalytic filter bags—will have the brand name EnviroTex and is claimed to be capable of removing dust, volatile organic compounds and nitrogen oxides in one integrated, cost-effective process.

Fabric filters are common across a variety of different industries and are often used as a final cleaning step to remove particulate matter from the flue gas. FLSmidth has extensive experience in this field, and has used this knowledge to design and manufacture fabric filters for a broad range of industries. Haldor Topsoe is a leading provider of catalysis and related process technologies. The two parties said they’ve been working jointly on developing Envirotex technology for the past four years.

The patent-pending catalytic filter bags consist of three layers of filter fabric. Each layer contains a tailored catalyst optimized for the removal of specific kinds of compounds from the off-gasses that pass through it. The design provides flexibility to tailor different catalytic combinations for different industries and also makes it possible to handle the removal of several critical compounds in one process. This can significantly reduce the cost of off-gas cleaning, according to Bjerne S. Clausen, CEO and president of Topsoe, because today’s standard is to use separate stand-alone systems to address removal of specific compounds—which translates into complexity and higher customer operating cost.

Pointing to tighter emissions regulations scheduled to take effect soon in the U.S. and China, Clausen said the two companies envisage broad interest in the technology from producers interested in both reducing process emissions and improving their energy performance.

As part of the agreement between FLSmidth and Topsoe, the new product will be manufactured at FLSmidth’s bag production facilities in the state of Georgia, USA. The bags will then be catalyzed and assembled at Topsoe’s catalyst production site in Houston, Texas. Topsoe’s production site will be expanded with an entirely new production line dedicated to the production of EnviroTex bags.

A landscape service company in the U.S. has been using hovercraft to apply sprayed dust-suppression chemicals on mine tailings that are too soft to support conventional vehicles.

In the Open
When you think of vehicles used in mining operations, a hovercraft may not come to mind—unless you have the ingenuity of D&T Landscaping, located in the Midwestern U.S. The company is under contract to manage environmental hazards, such as blowing dust, at a major taconite mining region on the Mesabi Iron Range in Minnesota.

Owner David Olson explained why he is using two hovercraft to increase the reach and speed of his company’s dust suppression efforts: “We’ve used tractors and piston bullies, but they don’t work well in a soft environment. The surface is like quicksand; it does build a crust as it starts to dry, but you can’t stand or walk on it. Our situation is basically mud. To use a liquid dust suppression agent on the tailings, we needed to be able to get out to places where our current technology doesn’t take us.”

Each of D&T Landscaping’s hovercraft is capable of carrying 100 gallons of dust suppression agent, fuel, a pilot and a specially designed lightweight spraying system. The hovercraft were built by Neotetic Hovercraft, Inc., based in Terre Haute, Indiana, USA.

According to the landscaping company, hovercraft not only expand access to areas that are difficult or impossible for other vehicles to reach, they also operate less expensively than other vehicles and cannot become stuck in the mud. The hovercraft also frees the company from a need to rely on outside services such as helicopters, which had been used in the past to attempt to manage blowing dust. Helicopters come with high operational costs per hour and, unlike hovercraft, are limited by weather and visibility. In addition, hovercraft pilots are not required to be compliant with FAA regulations, so they can operate longer and more often than helicopter pilots.

Soilworks, a provider of dust control and soil stabilization products, said it has been awarded a patent for its gas-to-liquid (GTL) technology-based Durasoil dust control product.

According to the Arizona, USA-based company, petroleum-based dust suppressants and synthetic fluid derivatives have generally been made from crude oil. Soilworks said it has developed a method to produce its Durasoil synthetic dust control fluid from natural gas, resulting in a product that controls dust on a micron level by “wetting out” any soil or aggregate to create a long-term, re-workable and self-healing solution that coats and agglomerates particulates, weighing them down like water without evaporating or freezing.

A unique feature provided by the GTL technology is the ability to apply as-is during the winter, in dusty environments created from freeze-dried soils and particulates in extreme arctic conditions. Its non-volatile formulation and increased resistance to oxidation from intense UV rays also extends performance longevity in hot, arid environments, according to the company.

Profile Products offers a patent-pending engineered soil media to help establish sustainable vegetation in difficult conditions. According to the company, its ProGanics Biotic Soil Media (BSM) is intended as a topsoil alternative but also contains components that will bring depleted soils back to life. From a dust control standpoint, the product could eliminate the need to truck in tons of replacement soil, possibly over challenging, difficult-to-access terrain. According to the vendor, it would typically require 36 truckloads of topsoil to cover a one-acre tract to a depth of 4 in. (100 mm) compared with two, 3,000-gallon-capacity hydroseeder tanks applying 3,500 to 5,000 lb (1,600 to 2,300 kg) of ProGanics.

ProGanics BSM is a blend of bark and wood fibers with soil building and growth establishment components. It is applied like hydraulic mulch and mixes quickly into a viscous, dark-brown slurry that is claimed to be easy to apply and meter. “The high-loading rate of 100 pounds per 100 gallons of water results in fewer tank loads per acre, and it is designed to retain water for higher yield, go down evenly, and resist dewatering,” said Michael D. Robeson, technical development manager for Profile Products.

Presto Geosystems, a manufacturer of soil stabilization products, offers Geoterra GTO construction mats. According to the company, Geoterra GTO mats meet a need for fast-deployment construction mats and can be ideal for temporary access roads, work platforms, heli-pads and temporary or long-term storage. Fabricated from tough but lightweight HDPE, the mats improve ease of handling, deployment and installation, as well as safety. The mats can be installed and moved on-site by hand without special or heavy-duty handling equipment. They are interconnected with large poly bolts, making them quick to deploy and easy to configure to site layout. 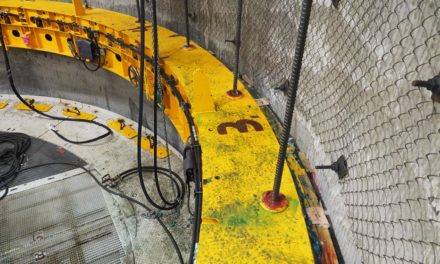 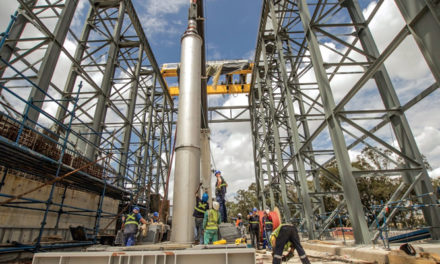 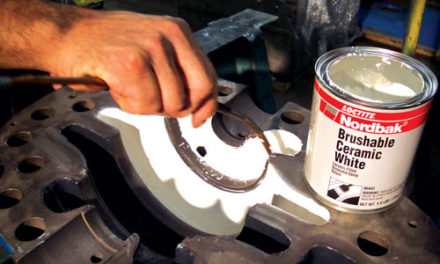