Speaking at the Bank of America Merrill Lynch 2012 Global Metals, Mining and Steel Conference, which was held at the Loews in Miami Beach, Florida, USA, during May, Marius Kloppers, CEO, BHP Billiton, explained the transitions he sees taking place with future demand fundamentals. He talked at length about how BHP would evaluate future investment decisions against a changing demand backdrop.

Throughout the recent bull market in mining (2002-present), BHP has expressed a confident outlook. It was one of the few companies bold enough and with deep enough pockets to continue to invest in mining operations during the global financial crisis. Going forward, however, Kloppers believes the industry now faces an evolving set of challenges. With a value-focused strategy, significant flexibility in the portfolio, and strong momentum, he remains confident with a bit more pragmatism.

BHP is a leader in iron ore and base metal production. Demand for those commodities is driven by urbanization. The world’s population has grown steadily at an average rate of 1.5% per year for the last 50 years. The accelerating rate of urbanization, however, has had a more profound impact on demand. In 1960, 34% of the world was considered urban dwellers. That figure grew to 52% in 2010. In China alone about 200 million people migrated to urban centers from 2000-2010, which is equivalent to about two thirds the current U.S. population. When people move to cities, they consume more materials and energy. Urbanization will continue with 250 million more Chinese and a total of 1 billion people worldwide migrating to cities in the next 15 years.

The mining companies that are well-positioned for the changing patterns in demand will benefit the most, Kloppers explained. “Commodity demand patterns in the developing economies change as the GDP growth trajectory transitions from being investment to consumption led,” Kloppers said. “History tells us that steel consumption peaks first, while copper reaches a plateau later in the GDP growth cycle. Food and energy show a more linear growth pattern over a longer period of the cycle.”

Those patterns are evident in the statistics for China’s share of global consumption of key commodities. Among steel products (coking coal and iron ore), the Chinese are consuming 50% or more. For aluminum and copper, their share of demand hovers around 40%. This contrasts with uranium, crude oil and potash, which varies between 5% and 20% of global demand.

The most significant driver during the last decade has been the resource industry’s inability to respond to demand growth, Kloppers explained. “When Chinese demand growth first became evident in 2001 or 2002, mining companies could not respond because they did not have spade-ready projects,” Kloppers said. “The companies that had survived the previous decade did so by taking costs, such as exploration and project development, out of the equation. The result was a lag in supply.”

The rate of capital expenditure in the mining industry lagged the growth in Chinese demand for most of the last decade. “This failure to respond in supply terms led to the sharp reversal in prices [upward],” Kloppers said. “However, a decade later, sustained higher prices and returns have changed behavior. The prospect of returns attracted capital. In the last five years, the natural resources sector has rebuilt its pipelines.”

Mining companies now are finding that the fundamentals have changed again, Kloppers explained. “Shifts in terms of trade have strengthened some producer currencies,” Kloppers said. “The increase in developmental activity has dramatically escalated capital and operating costs. Host governments have continued to pile on royalties and more onerous regulatory burdens.”

As a result, the industry now has a different set of challenges looking forward. The mining sector probably has more projects than cash flows, Kloppers explained. “It has investible options in places where it did not have them before, but those options have varying qualities,” Kloppers said. “People will have to make choices and quite a range of outcomes are possible.”

Making Informed Decisions
BHP has choices to make too. The company will prioritize its investments where it has political and fiscal stability, a sustainable advantage, and where it has the best returns vs. the risks it has assumed, Kloppers explained. “For us, if our criteria cannot be met in one project or one product or one geographical location, we will redirect our capital elsewhere or we simply will not invest,” Kloppers said. “Of course, giving the long-life nature of the investments, we have to do so being very cognizant of changing demand patterns.”

Kloppers cited three generic scenarios that he says explain the majority of pricing behavior. “When markets are in surplus, decisions are driven by cash costs—think aluminum today,” Kloppers said. “When utilization rates are high, we have growth by inducement pricing—think copper today. When demand outstrips supply and inventory levels are low, the industry gets scarcity pricing on opportunity costs—think iron ore at certain points during the last decade.”

To explain the relevance of these scenarios, he offered two prospective situations for iron ore and copper. “Over the 10 years to 2011, Chinese annualized steel production growth increased at a [compound annual growth rate] of 16%,” Kloppers said. “The resulting 800 million mt feed-through overwhelmed the iron ore producers’ ability to respond. Hence, [the market experienced] tightness and price setting by scarcity or low quality Chinese product.”

Kloppers believes Chinese crude steel production will grow to 1.1 billion mt steel by 2025, even though the “steel intensity per unit GDP” will decrease. “If we assume partial displacement of low-grade Chinese ore, there is an opportunity for an additional 650 million mt of iron ore before we reach a peak in demand,” Kloppers said. “However, let’s be straight, this is a lower rate of growth than we saw in the last decade in both percentage and absolute terms; 650 million mt vs. 800 million mt. While this is a major opportunity for BHP and others, for those that invest in iron ore, they should do so knowing that supply in due course will meet demand. As we do so, we should also remain aware that the pricing mechanisms will change.”

Longer term (post 2025), Kloppers believes the combination of a plateau in steel use in China and the availability of scrap will likely result in a protracted period of low to negative growth for the seaborne iron ore market. “Lower cost seaborne iron ore will displace higher cost supply and prices will revert to marginal cash costs,” Kloppers said. “A window of opportunity exists for incumbent iron ore producers that are low on the cost curve, can leverage existing development, are quick and close to the market, and have competitive fiscal terms and stability. That’s how we will test the economics of our iron investments going forward. Money will only be allocated to this product if it can generate superior returns against that back drop.”

Copper requires a different set of analysis because resource depletion is such a big issue, Kloppers explained. Also, the type of intensity transition is not as pronounced in copper as the iron ore example in China. The world’s major copper ore bodies will show a decline over the next decades. Take that decline into account and add a forecast for underlying growth of 3% per year, the market should see a 5% increase in growth that copper producers will have to meet, Kloppers explained.

“In our base case scenario, prices over that term will be at a level high enough to incentivize investment in supply, which is the second scenario I offered,” Kloppers said. “Similarly, we equally expect the incentive prices for commodities, such as potash and natural gas in the U.S., to become increasingly important given the decline in ore body grades or reservoirs over time.

“Our strategy remains unchanged over the past decade,” Kloppers said. “Our purpose is to create long-term shareholder value through the discovery, acquisition, development and marketing of natural resources. We want to own and operate large, long-life, low-cost, expandable upstream assets which are diversified by commodity geography and market. That best describes BHP’s competitive advantage and its core competence and it will maximize our success.”

The BHP Difference
What sets BHP apart from the other major mining companies is the depth, quality and breadth of its portfolio. Using a new method, Kloppers expressed BHP production in copper equivalent units. “We have plotted our net operating cash flow per ton of copper equivalent production against our future capex plans,” Kloppers said. “The other diagram considers the cash flow per employee. As can be seen, our portfolio delivers a higher cash margin per ton of copper equivalent production and a higher cash margin per employee, and does so at very competitive levels of capex.”

Oftentimes BHP is associated with economies of scale, but Kloppers believes that measures such as simplicity, efficiency and profitability are even more important. “Not only does BHP’s portfolio deliver tangible value today, the infrastructure and resources embedded in our current portfolio have generated valuable options for the future. And, sometimes it’s what we have not done that has differentiated us,” Kloppers said. “We were early to say it’s about the upstream, recognizing that the economic rent accrues there. As we move forward, this upstream mantra will continue to be, in an increasing way, reflected in our capital expenditure plans.”

BHP’s focus for new capital for the five commodities and six major basins in which it operates will continue to sharpen. “All of the development options associated with these basins will be scrutinized throughout the approval process,” Kloppers said. “Each option is different. Since we are net long opportunity, not all options will see investments today.”

With iron ore, Kloppers said the question is not: Can the project team execute? They have been doing so for 10 years. “In potash, however, where we are a new entrant, we must get it right technically, but the market opportunity is in front of us,” Kloppers said. “Making sure that we have all of the up-front engineering in the Jansen project right is of paramount importance. We are not compelled to fast track it. The decisions we make today will drive returns in the long term for that asset.”

BHP is in the enviable position of having more development options than human capital and financial capacity, Kloppers explained. “We have choices,” Kloppers said. “If the economic returns are not there, we are not going to invest.”

Focusing More Attention on Fewer Things
Following the approval of its organic growth projects at Escondida, BHP is currently executing 22 major projects. “We are largely committed for our capex in FY2012 and FY2013,” Kloppers said. After that, he sees flexibility in FY 2014 and 2015. He explained the company would be careful to approve projects in sequences that maximize value, reduce risk and balance the consideration of the long- and short-term.

Kloppers an extensive list of divestments BHP has made. “We will continue to optimize and to simplify the portfolio moving forward,” Kloppers said.

In Western Australia, BHP’s decision to invest $5 billion during the GFC continues to deliver record results. The company expects capacity to reach 200 million mt/y of iron ore by 2013. At Escondida, the largest copper mine in South America, BHP will nearly double copper production by 2015. This represents strong growth in BHP’s core businesses: iron ore and base metals.

“We are confident in the long-term outlook for our company,” Kloppers said. “The industry, however, faces a very different set of challenges and choices. Fiscal stability is a fundamental requirement given the size and duration of the development options we are considering. The quality and diversity of our asset portfolio will continue to drive returns. A stringent project approval process will ensure that we allocate capital in a disciplined fashion.” 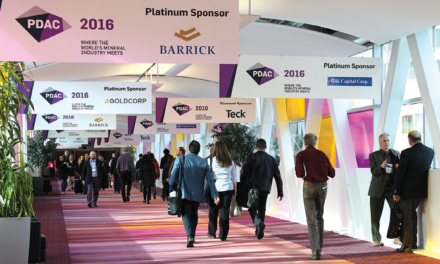 PDAC 2016: Looking for Solutions in a Difficult Market 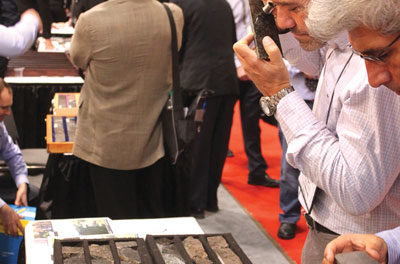 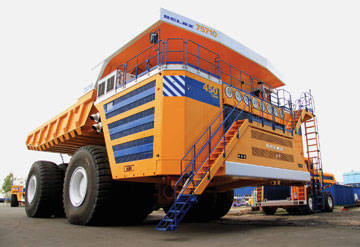