To the surprise of almost everyone involved in, or following, the progress of the rescue, the drilling effort, initial breakthrough and borehole casing operations proceeded faster than anticipated, allowing all of the miners to be extricated, one at a time in a specially fabricated rescue capsule by October 14, long after our October issue had gone to press.

Editor’s Note: As the deadline steadily drew closer for sending E&MJ’s October issue to the printer, the magazine staff anxiously kept one collective eye on the calendar and another on the drama taking place at a remote mine site in the barren, rugged landscape of northern Chile, where 33 miners had been trapped 700 m underground since August 5. With a three-pronged rescue attempt under way—which, at the time, was predicted by Chilean authorities to take until as late as Christmas 2010 to achieve results—we could only report the latest details of the intense effort (see “Rescuers Work to Free Chilean Miners,” E&MJ October 2010, p. 24) to drill an adequately sized rescue bore as quickly and accurately as possible without endangering the well-being of the trapped miners, all of whom appeared to be holding up amazingly well despite the physical and psychological stresses of their prolonged underground entrapment.

To the surprise of almost everyone involved in, or following, the progress of the rescue, the drilling effort, initial breakthrough and borehole casing operations proceeded faster than anticipated, allowing all of the miners to be extricated, one at a time in a specially fabricated rescue capsule by October 14, long after our October issue had gone to press.

Although the intense general-media focus on the rescue operation—and on the miners themselves after their liberation from the 50-m2 (540-ft2) refuge chamber in which they’d spent 69 days—has gradually subsided, the details of the rescue continue to fascinate those who’ve ever donned hardhats and stepped into a man cage for a visit, or a shift, underground. The following report, provided by courtesy of Mineria Chilena, provides another perspective on the rescue effort from the point of view of one of the drilling-services companies directly involved in the operation.

Joy, Tempered by Reality
On Sunday, August 22, Chilean President Sebastian Piñera officially confirmed rumors that had been circulating around Camp Hope—a makeshift camp set up at the site of the tragedy—that the 33 miners trapped in the depths of the San José mine, in Chile’s Atacama Region, were alive and well in a refuge chamber at a depth of almost 700 m underground. The news brought to an end 17 days of fear and uncertainty.

The initial outpouring of joy however soon gave way to a difficult challenge: finding the best formula for rescuing the miners as soon as possible, a task involving technical and human challenges no one had faced before. Several options were considered, including the drilling of a rescue shaft with a Strata 950 raise borer, a machine designed to cut mine ventilation shafts.

But Chilean government authorities and the group of professionals in charge of the rescue did not rule out alternative solutions, and soon, new initiatives were launched. These included widening an existing pilot hole using a Schramm T-130XD water drilling rig; and using oil field drilling technology with an oil-drilling rig—the RIG-422. The three options were named Plans A, B and C, respectively.

In the end, Plan B was the first to reach the target.

Once it had been confirmed the 33 miners were alive, professionals, technicians and operators at Geotec Boyles Bros., a Latin American affiliate of Kansas, USA-based Layne Christensen Co. and an experienced drilling company already participating in drilling work at the San José mine, came up with the idea of using a new, alternative technology to rescue the miners: opening one of the pilot hole shafts—with the help of the trapped miners—that had already punched through to the miners’ refuge.

They determined this approach had one major advantage: By using one of the existing pilot holes, it was almost guaranteed further boring would connect with the target, unlike the other two methods.

Executives at Geotec contacted nearby copper miner Minera Collahuasi to ask if a Schramm T-130XD drill rig located at their mine could be used for the task of widening the shaft; that request was quickly approved. Another Chilean copper operation, Minera Escondida, also made available a similar machine as a back-up. These companies funded the project and provided a team of technical personnel led by geologists Walter Véliz (Escondida), Jorge Camacho (Collahuasi) and Felipe Matthews (Geoatacama).

Another critical decision made during the planning stage was to use large-diameter air hammers instead of tricone bits to sink the hole faster. Geotec’s management suggested four specialists in this type of drilling from its U.S. affiliate, Layne Christensen, be brought in. This company’s contribution was key to the success to the rescue effort.

The Plan B rescue proposal was presented and a decision was made to proceed. Plan B would also ensure that progress would continue to be made even if the Strata 950 rig brought from Codelco’s Andina division encountered problems.

Once the plan had been defined, another important step taken was to contact equipment suppliers to obtain the most suitable components and technologies. This was especially important in the case of the type of hammer to be used. It was decided to use tools manufactured by Center Rock Inc. (CRI), Pennsylvania, USA, represented in Chile by Drillers Supply S.A.

Why CRI? There were several reasons, according to those involved:
• The company had support and service centers in Chile.
• Experience; CRI had participated in  similar rescue operations in the U.S.
• Most importantly, its drill tools required less air to operate (about 4,000 cfm compared with 7,000 cfm for alternative technologies) which was a key issue, as it was not clear how cuttings would be removed from the bore—by bringing them to the surface or allowing them to fall to where the miners were located.

Preparing to Drill
On August 26, personnel from Geotec began the Plan B effort, requiring close attention during preparations to ensure the pilot hole was oriented as accurately as possible to reach the area of the underground workshop. In order to avoid flooding the space in which the survivors were living, the team drilled without downhole motors to direct the drill string, as this technology uses large quantities of water. Instead, rigid bars were introduced into the hole to guide the drill.

After five days the Plan B drill reached its underground target. The team named the hole “The Hand of God” because of its ultimate success despite encountering geological problems that threatened to trap the drill in the rock.

The Schramm 685 reverse air rig, brought in from Minera Escondida, made contact with a tunnel near the maintenance workshop at 624 m, with a final hole diameter of 5-½ in.

Information provided by the miners indicating where the drill had broken through was essential for the Geotec team to begin the second stage of the operation. Using the newly completed hole as a guide, the aim was to widen it to 28 in.—the diameter necessary to allow passage of a rescue capsule. The drill team coordinated with Minera Collahuasi to transfer a Schramm T-130XD, also owned by Geotec—a larger capacity machine typically used to drill deep water wells.

Layne Christensen contributed its expertise to the rescue efforts as well. Two of its top drillers, Jeff Hart and Matt Staffel, were dispatched to Chile from Afghanistan, where they had been drilling water wells for U.S. troops. Layne Christensen also sent two Spanish-speaking drilling assistants, Doug Reeves and Jorge Herrera, from the company’s western U.S. office.

“Around 25 people from Geotec participated in Plan B, alongside four professionals from Layne Christensen, two experts from Drillers Supply, three from CRI, a representative of Geoatacama and two employees of Schramm,” said James Stefanic, operations manager, Geotec. ”Most of the Geotec personnel had been employed at Collahuasi.”

The Schramm T-130XD machine arrived at the mine September 3 after a journey of more than 500 km from Collahuasi, and began work immediately. The rig’s target was the mine’s maintenance workshop, located near the refuge. Advancing at a rate of 20 m per day, the rig had the advantage of using a previously drilled hole to facilitate the first stage of its job: drilling a 30-cm (12-in.)-diameter bore. The team would then evaluate the task of widening the shaft, an unprecedented challenge for the T-130XD.

Getting the Big Rig Ready
“The Schramm T-130XD normally has capacity to lift 130,000 lb. An engineering study carried out by engineers from Schramm and Geotec allowed us to modify the hydraulic pressure to reach a capacity of 170,000 lb,” said Sergio Fuentealba, a veteran drill mechanic for Geotec and one of the team handling rig maintenance.

The initial team coordination meeting was held at Geotec’s Antofagasta offices September 5, and the Plan B drill team was ready to begin the following day. Before the new drill could be installed, pipe and casing had to be removed from the existing borehole. The drill rig was then set up at the correct angle and began to widen the hole to 17-1/2 in. using a tricone hole-opening bit until the depth of the start of the 5-3/4-in. diameter hole was reached, approximately 3 m below the surface. An 11-3/4-in. air hammer was then mounted with a 12-in. hole opener-type bit and a 5-1/4-in. guide, suitable for expanding the existing 5-3/4-in. diameter hole. A 14-in.-diameter casing was installed to the center of the hammer in the pilot well to protect the mouth of the well, allowing Plan B to then begin.

During the next 33 days, Geotec’s operations were far from trouble-free. On September 9, drilling came to a halt at 268 m when the nose of the hammer bit broke. The broken piece of metal blocked the bore and the team briefly considered starting over before finding a solution. The final 40 m were challenging due to the hard and abrasive nature of the rock, forcing rig operators to fine-tune the drill several times to liberate it from the bars. They also faced the risk of breaking a rod, which would have led to the loss of the well. The local rock also wore down the hammers; however, the team found ways to overcome all of these problems. “The race was against ourselves,” said Luis Flores, water well drilling superintendent, Geotec.

On Saturday, October 9, the Plan B drill rig finally reached the underground workshop, creating the avenue of escape that would allow the rescue of the 33 miners to begin. 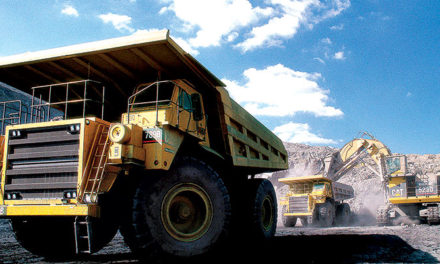 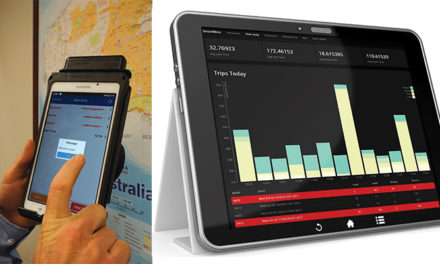 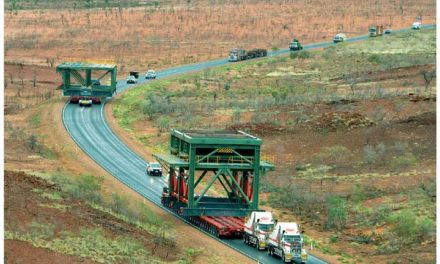 Making the Most of Modules