A panoramic view shows the faces at the Anglo’s Amandelbult Virtual Reality Stope.

The role of virtual reality and serious gaming in STS3D’s training for miners.

Miners constantly pursue technology that will improve safety and increase  production efficiency in a challenging environment. Anglo American places the highest priority on safety when it comes to production. If the mining company can get its crews to mark off their blasting patterns accurately, drill straight and time the explosives in the correct sequence, the blast will advance deeper, straighter, with pinpoint precision and, more importantly, safer. This, however, is easier said than done.

The shift supervisors for Anglo Platinum in South Africa face significant challenges. Their job is to maximize the amount of platinum ore for every blast, every day, with as little waste rock as possible. If the crews make mistakes, it can be costly. Each poor blast could mean a shallow advance into the face, uneven faces, rock breaking well under or over the planned excavation, or even falling rock, all of which takes time to clean and make safe.

Mistakes could even lead to a missed blast during the next shift cycle, which  could mean a production loss. With a target of 133 blocks of rock to be blasted every day, the pressure is on, and targets are easily missed. 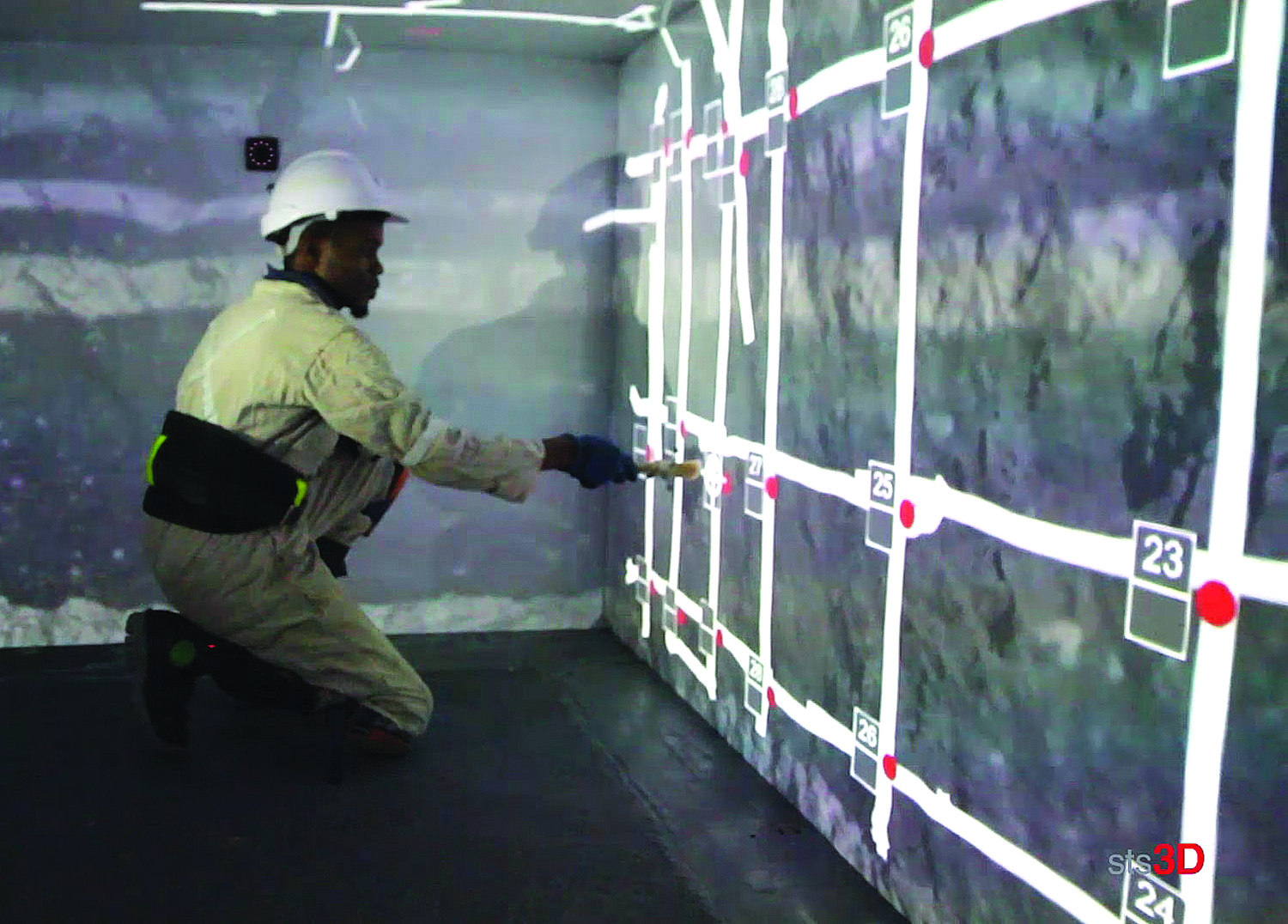 A shift supervisor marks the drill holes on a virtual face.

Providing effective blast training is difficult on multiple fronts. Taking trainees 900, 1,500 or 3,000 feet underground takes time. It’s not only dark, dusty and damp in the mines, but also deafening and dangerous. This is not an environment to remain in for long. People rush the job to get out, and there is no time to look at better practices to advance the blast accurately.

Training crews on the surface, meanwhile, isn’t much better. Communicating decades of practical experience and giving trainees a proper grasp of concepts like the scale, distances and measurements of a blast face (or stope panel) is extremely difficult in a classroom setting. Similarly, you can’t build muscle memory in practical exercises on a scaled-down, 2D surface. Then, assessing for competency presents yet another round of challenges. Conventional techniques even include having trainees mark off the faces in 1:1 scale on the lawns, but that’s a poor substitute for the real thing.

To tackle this problem, Anglo approached Pretoria-based STS3D, with more than 15 years of experience in building safety training solutions for the mining industry.

The leading-edge virtual reality solution STS3D built is exponentially improving the process of training mine crews. This visionary approach has set the stage for Anglo American’s custom-built solution: the Anglo American Amandelbult Training Complex Virtual Reality Stope, a world-first that recreates the situations miners encounter at the face as they prepare to drill a round. With several Virtual Reality training programs, an immersive VR Cube, seven VR Blast Walls, and a VR Robotics Simulator, STS3D planned the experience to meet Anglo’s needs. 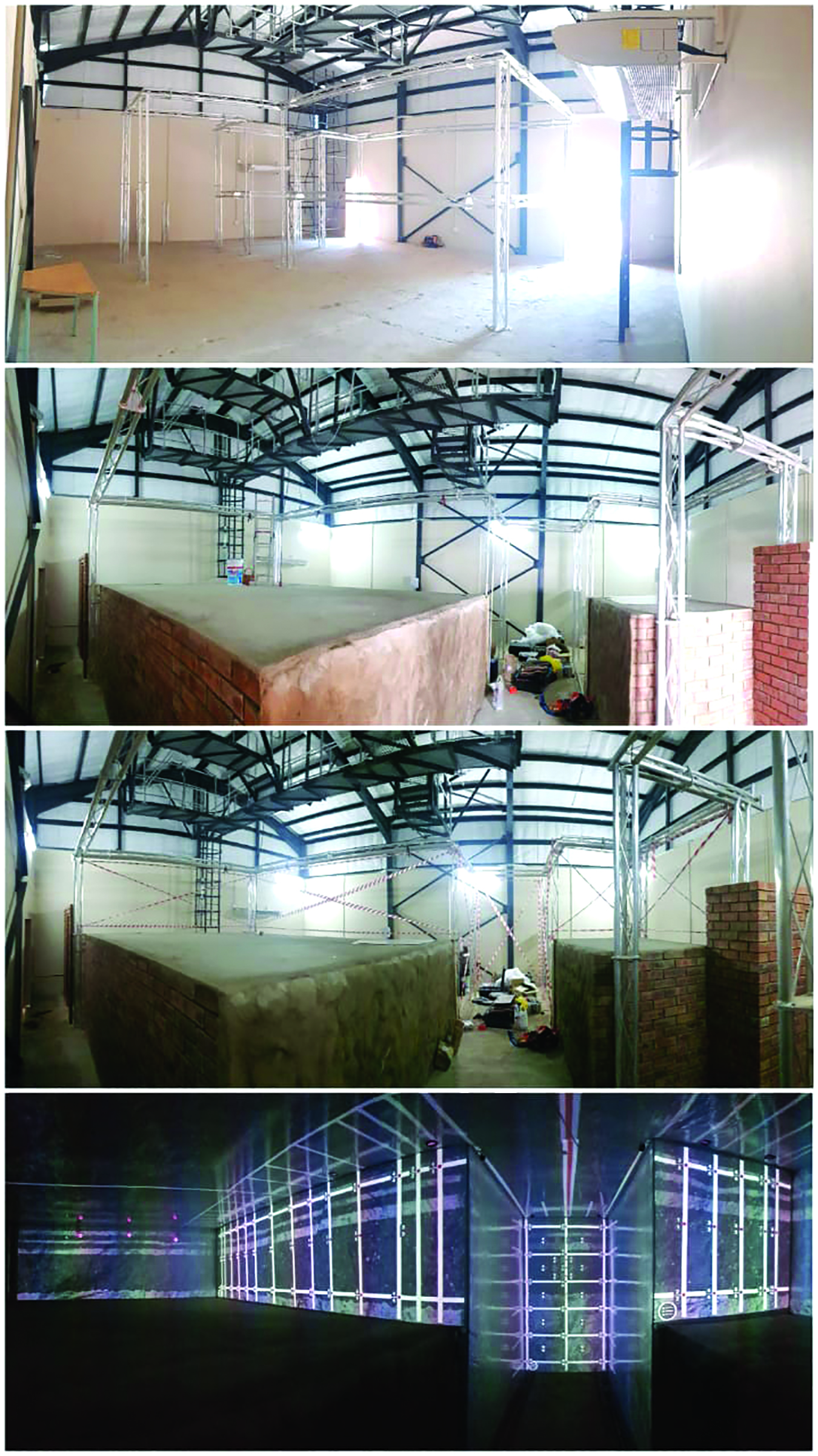 This facility is housed in a 2,300-ft3 training space surrounded by an immersive 800-ft2 rear projection screen. Running the simulation is one powerful PC driving 12 digital projectors and another for the 20 state-of-the-art Vicon motion capture cameras.

Although designing and constructing the hardware, building the virtual stope, and coding the functions presented the STS3D team with a challenge, the key hurdle was how to track the users in real-time within this multidimensional virtual stope. This required breaking new ground, so STS3D, being new to motion capture, sought out the best in the industry for assistance.

Virtual Solution for a Real-life Problem

One company stood out. With the depth of their response and their willingness to engage in an open conversation about how the system would work in the virtual mining environment, Vicon provided clarity and assurance.

Vicon quickly allayed concerns that cameras might not be able to track if markers were occluded by users. When Vicon convinced STS3D that their solution could track the subject accurately as long as a marker was visible to a single camera, it became apparent that this is the solution that would work. The simplicity of plugging the Vicon sample data into the Unity game engine increased the technology’s appeal.

Anglo American trains 1,500 people per year and must be able to operate the system on site without constant external support. Since a single instructor — without any prior experience in motion capture or Virtual Reality — only needs a one-button start to run the blast simulation, the Vicon system more than met the criterion of simplicity.

Since the Vicon system can track up to five people at once it enables team learning and makes the training of large numbers of trainees possible — a must in the mining environment. This ability to track multiple objects through space provides very realistic training, preparing users for real conditions in the field.

A Serious Solution for Serious Games

During entry examination, for example, miners must decide whether a zone is safe for operations. If they get it wrong, they get a realistic simulation of what could happen. A big loud bang and sudden darkness simulate a potential rock fall on the spot where they are standing. 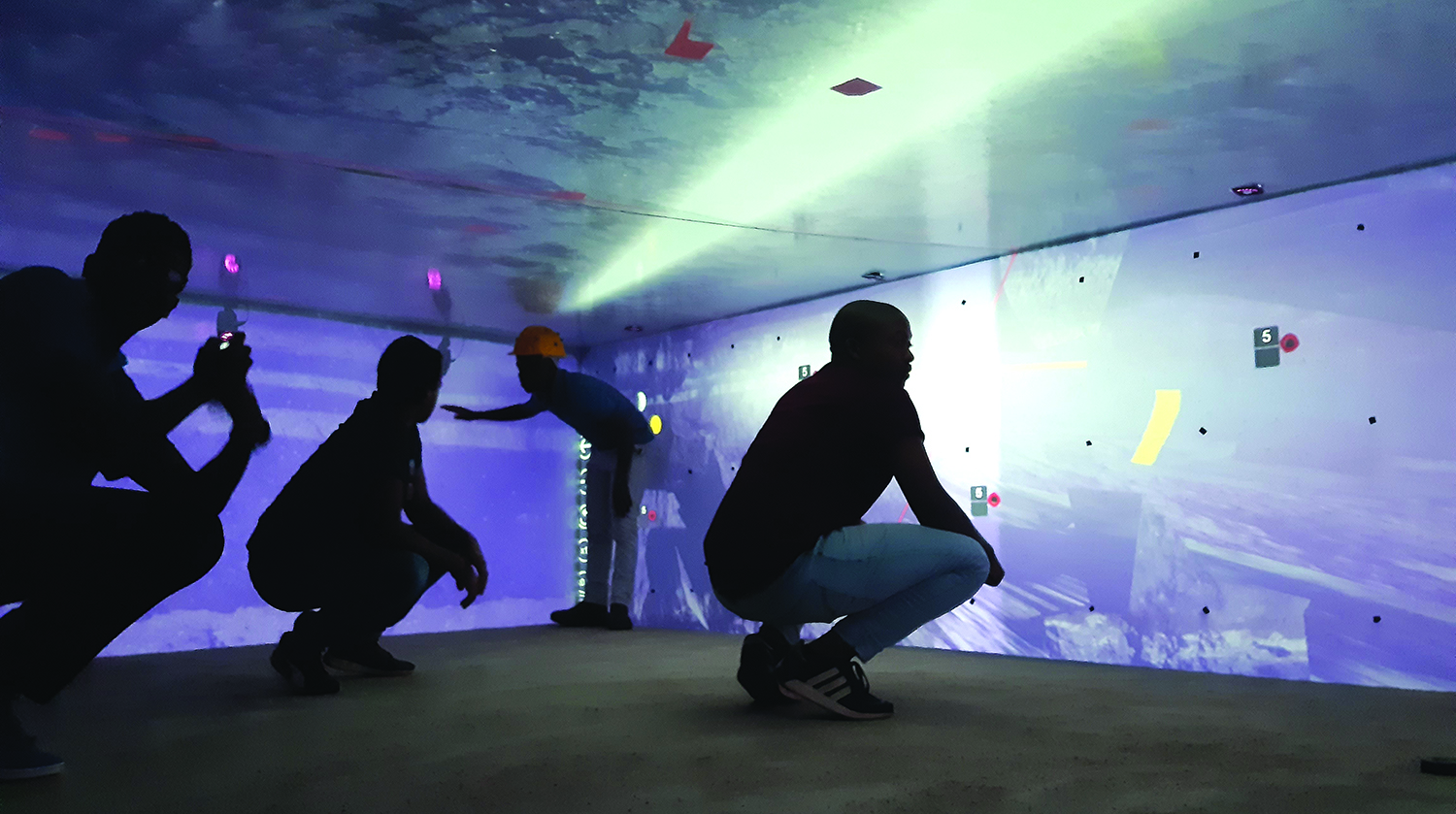 Miners discuss the results after detonating a virtual blast.

“Make no mistake, this gives the miners a real fright,” said Johan Bouwer, STS3D project lead. “They’ll remember their error. Since you are fully immersed in the virtual mine, there’s no room for distraction and the learning sticks. You’re on high alert all the time while marking a pattern on the rock face for the drill operators. And when you detonate the blast, the rock flies — creating a very vivid, a very memorable experience.”

The VR Stope is a life-sized serious game. It has two modes: training and assessment. In training mode, users are instructed step-by-step how and where to mark off the panel using a special virtual paint brush. This builds muscle memory and motor skills, which will be recalled once the trainee is out in the actual environment. The system provides immediate visual feedback on correct or wrong actions. The added ability to undo and retry allows for fast, effective feedback and learning.

Once the user has completed marking and timing, they experience the full impact of VR’s immersiveness. When the detonation is set off right in front of them, they see the firing sequence and fragmentation of the rock, driving home the effect of what they’ve just done. It also enables them to inspect the quality of the blast first-hand again and again, in real time or in slow motion, forward or in reverse. The miners can now really understand how and why the correct blasting procedure works best. 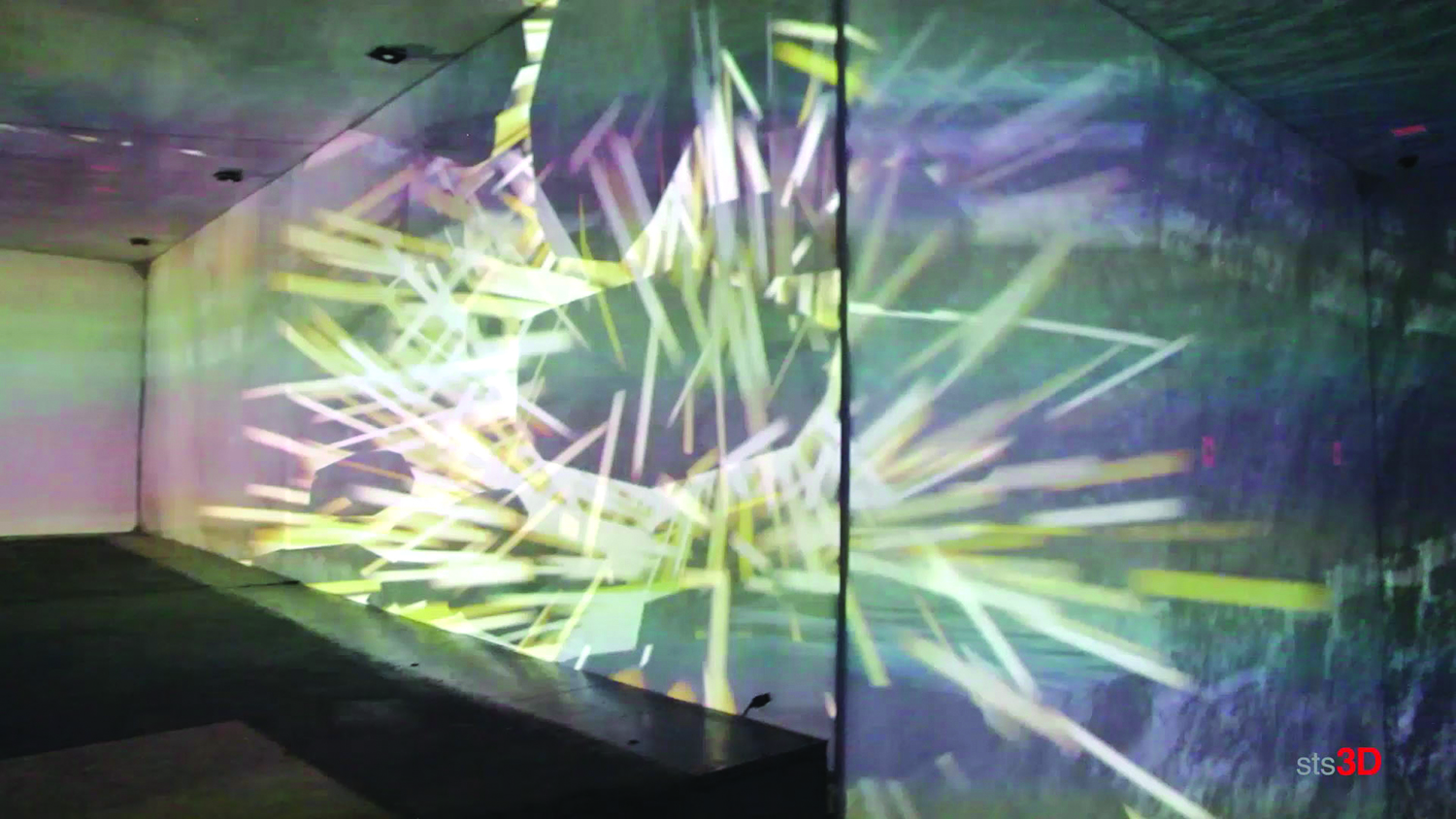 Trainees can inspect the detonation sequence just after the blast is initiated.

After a blast, the cameras track the hard hat position of the trainee, adjusting the perspective of the projections. This creates an illusion of depth, showing that the face wall has in fact advanced. Trainees can then study the results of their blast and immediately see if they have had a good or bad advance, another completely novel experience.

In the assessment mode, trainees mark the blasting pattern and time the detonation sequence of explosives themselves. Once the marking pattern is submitted, the system takes a screenshot of the trainee’s attempt. The image gets saved to their PDF report along with information on number of attempts, accuracy, the time taken and the number of times assistance was requested.

Trainees often compete for Top Score bragging rights, a level of gamification that goes beyond tricks like badges and achievements and that assists in making learning stick.

In the next phase of instructional design and deployment, STS3D will cover Safe Entry Examination, testing for ventilation and noxious gasses, support installation and rock strata control, simulating life-threatening experiences without ever taking trainees away from the safety of the virtual stope.

This article was adapted from a case study submitted by Vicon Engineering. For more details, visit www.vicon.com/engineering. 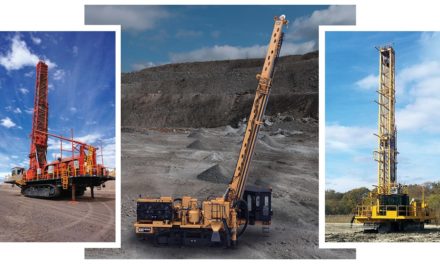 Drilling in the Digital Age 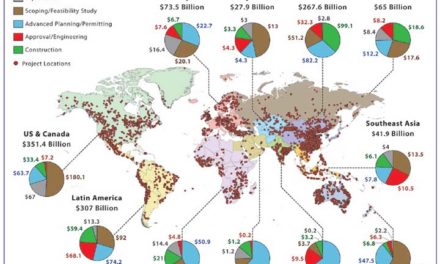