Hitachi recently introduced new versions for two of its mining-class hydraulic excavators—the EX5600-6 and the EX2600-6. Both -6 models feature bucket capacity increases compared with the -5 versions, and also offer claimed productivity improvements ranging from 17% in the backhoe version of the EX5600-6 to 12% for the shovel version; and from 13% in the EX2600-6’s backhoe configuration to 4% for the shovel version.

Hitachi said it has shortened the reach of the EX5600-6 backhoe front attachment and boosted engine output, resulting in higher productivity with cycle times equivalent to the -5 version. Front-shovel bucket capacity for the larger EX5600 has been increased as well, from 27 m3 (35.5 yd3) to 28 m3 (38 yd3). In addition, hydraulic pump output has been increased by 10% through a change in the pump drive gear ratio, providing higher hydraulic flow rate at the same pressure. Other related improvements include a new design and manufacturing process for the machine’s hydraulic oil cooler. Fan speed has been increased to provide additional cooling capacity. The EX5600-6 is powered by a Cummins diesel similar to that used in the -5 version, but with increased horsepower.

The basic configuration of the -5’s cab is retained, but LED lighting has been adopted for longer life and less heat generation. Interior features include an air suspension seat and low-effort short-throw levers with electric fly-by-wire, along with optional provisions for extreme operating conditions and optional digital interface with major mine management systems.

Bucket capacity for the EX2600-6 backhoe version has been increased from 15 m3 (19.6 yd3) to 17 m3 (22.2 yd3), and as with the EX5600-6, the reach of the backhoe front attachment has been shortened and engine output boosted to achieve higher productivity with cycle times equivalent to the previous version. Radiator and oil cooling performance have been increased through a changeover to a single 60-in. (1,524-mm) fan from the previous model’s two smaller fans. The EX2600-6 also offers the improved hydraulic pump output performance and improved hydraulic oil cooler design included in its larger sibling.

The -6 version also provides a new exterior walkway near the right rear and across the counterweight for easier access to key areas. www.hitachimining.com 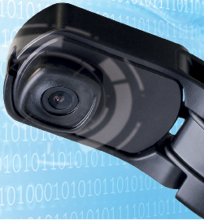