Baldor Electric now offers Dodge D-LAG conveyor pulleys that feature a natural rubber compound, which is claimed to be 73% more resistant to wear than standard SBR rubber. By increasing lagging life, Baldor said its Dodge D-LAG conveyor pulleys will extend the operating life of both the conveyor pulley and conveyor belt. The lagging is fully vulcanized for pulley bonding and strength, making it resistant to cuts and gouges. Two pulley styles are available: D-LAG heavy-duty drum pulleys from 10 to 24 in. (254 to 607 mm) diameter, and D-LAG MDX (mine duty extra) drum pulleys from 12 in. up to 24 in. diameter. Baldor’s Dodge heavy-duty pulleys are designed with flexible end discs to eliminate weld fatigue under cyclical loads, while Dodge MDX pulleys feature an integral hub design that eliminates the welded hub. According to the company, independent testing has shown that D-LAG significantly outperforms other rubber formulas when subjected to abrasive conditions. 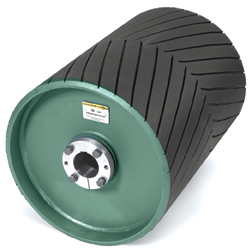