Weir Minerals features the Enduron SP series cone crusher line as part of its expanding comminution product portfolio, which includes crushers, screens and high-pressure grinding rolls. Available in the SP 100, SP 200, SP 300, and SP 400 models, and ranging from 100 hp to 400 hp, the Enduron SP series cone crushers are claimed to deliver among the highest production-capacity-per-feed ratios in the industry.

Cone crusher adjustments and operations are fully automated, and a hydraulic adjustment and locking system allows adjustments under full load.

According to the supplier, the power of a high eccentric speed-up to 375 rpm-with a larger crushing chamber results in more tons per hour produced, when compared with standard cone crushers. In fact, said Weir, the SP series cone crushers deliver 30%–40% more capacity per hour than spring-type cone crushers, according to data and operational analysis.

Adjustments and operations are fully automated, and run from a simple-to-operate onboard control. A wireless remote control also is available. All Enduron SP series cone crushers are equipped with two adjust-on-the-run planetary gearbox hydraulic motors that allow the operator to unlock, adjust and relock the bowl under full production. This hydraulic adjustment and locking system also means that liner changes can be completed in less than two hours. The hydraulic tramp iron reliefsystem provides automatic clearing for uncrushable material. A dust seal system, equipped with an auto greaser, protects the crusher’s lubrication oil from contamination. 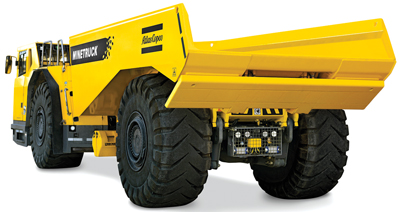 Underground Mine Truck Gets Major Upgrade