Arch Coal announced that it has completed the acquisition of Rio Tinto’s Jacobs Ranch mine for a purchase price of approximately $764 million, which is about $3 million more than the initial announcement and includes an estimate for working capital adjustments. In 2008, Jacobs Ranch produced 42.1 million tons of high-quality sub-bituminous coal.

“This transaction further expands Arch’s size, scale and strategic position in the Powder River Basin,” said Steven F. Leer, chairman and CEO, Arch Coal. “Arch plans to integrate Jacobs Ranch, which is the third largest coal mine in the United States based on 2008 production, into the company’s existing Black Thunder mine, creating what we believe will be the largest single coal-mining complex in the world.”

Once integrated, the enhanced Black Thunder mine will control six draglines, 22 shovels, more than 130 haul trucks, three rail loadouts and 20 train landing spots. The combined mine also will have assigned coal reserves of 1.6 billion tons and productive capacity of more than 140 million tons per year should market conditions warrant.

The U.S. Environmental Protection Agency says it’s going to hold up 79 applications for surface coal mine permits in four states (West Virginia, Kentucky, Ohio and Tennessee) for further “enhanced” review. All 79 permits were on a preliminary list released Sept. 11 (See additional coverage in Appalachian Profile, p. xx). The EPA says it will work with the U.S. Army Corps of Engineers, which issues the permits, and applicants to reduce water quality damage. The action is the latest attempt by the EPA to rein in mountaintop removal mining in Appalachia. The highly efficient, but evasive mining practice has been targeted by the Obama administration’s EPA.

“The EPA’s announcement to halt 79 pending coal mining permits continues the moratorium on Eastern coal mining that jeopardizes the livelihoods of tens of thousands of American workers and their communities. By deciding to hold up for still further review, the agency damages a weak economy struggling to recover in the worst recession in post-war history,” said Hal Quinn, president and CEO, National Mining Association (NMA). “The EPA has adopted its own process and criteria for reviewing coal mine permits that is the responsibility of the Army Corp of Engineers. No one outside of EPA—not even the Corps—knows what criteria the EPA has used to now find these 79 permits insufficient. Permit applicants do not know what conditions outside the bounds of the existing regulations they must meet to obtain a permit. In effect, the EPA is imposing new regulations that have not been proposed or publicly reviewed as required by law. This action reinforces our earlier call for a transparent process that gives coal operators confidence in the regulatory process.

“We’re at a loss to understand how the EPA’s moratorium on coal mining aligns with the public interest and the administration’s attempt to restore economic growth and create high wage jobs,” Quinn said.

Peabody Energy recently announced it has opened an office in Singapore that will serve as the new hub for Peabody COALTRADE International activities in Southeast Asia, further expanding the company’s access to high-growth seaborne coal markets. “Singapore provides a central location to continue growing our leading coal trading and brokerage platform with prime access to the world’s fastest-growing markets,” said Peabody Chairman and CEO Greg Boyce. “Our presence in Singapore will expand our sourcing and shipping capabilities to China, India, Indonesia and other key Asian markets. The expectation is that these markets will continue to expand at a 5% to 10% compound annual growth rate, and Peabody is best positioned to capitalize on that growth.”

Pacific seaborne coal demand is very strong as Asian nations lead the world out of recession and drive sustained growth in coal consumption. China is the fastest-growing coal market in the world, and net coal imports are up nearly 150% in 2009. India is the fastest-growing coal importer and expects to be short by as much as 200 million tons of coal per year within five years. Australia and Indonesia are the top global coal exporters in the world and are expected to have the largest increases in exports in coming years.

Indonesia expects to increase coal production by up to 20 million metric tons (mt) next year as lawmakers insist that the government must book higher non-tax revenue from the mining sector in 2010. According to The Jakarta Post, the country expects to produce 230 million mt of coal during 2009. Indonesia’s coal production has already reached 72 million mt in the first half of this year. In the same period, the coal sales volume reached 75 million mt; 52 million mt being sold to domestic buyers and the remaining 23 million mt going to exports. 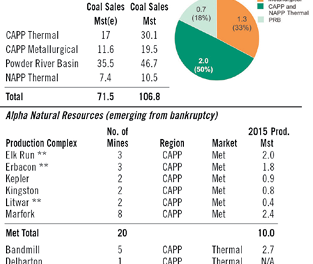