Upgrades will reduce discharges of total dissolved solids by more than 36 million lb/yr, and will cut metals and other pollutants by approximately 9 million lb/yrin Kentucky, Pennsylvania, Tennessee, Virginia and West Virginia, said the U.S. Environmental Protection Agency (EPA). For 6,289 violations, the companies must also pay a $27.5 million civil penalty—the largest ever under CWA’s Section 402.

The companies are required to build and operate systems curbing selenium and salinity limits, while implementing future compliance improvements. These include development and implementa-tion of environmental management and periodic internal and third-party environmental audits.

The companies must further maintain a violation-tracking database and compliance at each outfall—while significantly improving response time. Third party experts will also be mandated to resolve discharges, while penalties will be  assessed for further discharges subject to  increases—in some cases, doubled for continu­ation.

The U.S. will receive 50% of the penalty; the rest will be divided under violations per co-plaintiff states with West Virginia, Pennsylvania and Kentucky receiving $8,937,500, $4,125,000 and $687,500, respectively. A consent decree in West Virginia’s Southern U.S. District Court is pending a 30-day public comment period and approval.

In addition, the settlement resolves a prior 2008 settlement with Massey Energy, and applies to previously Massey-owned facilities and sites. Under the agreement, Massey paid $20 million for similar CWA violations, along with more than $1 million in penalties through 2016. Alpha bought Massey in Q2 2011 and, since taking over the company, has cooperated in settlement development. 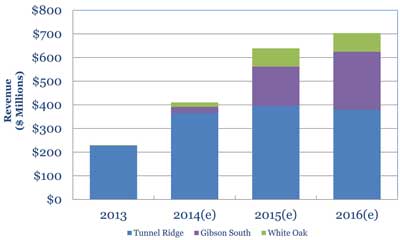