Suppliers Fight Abrasion and Corrosion with New Products and Designs

Wear and abrasion damage costs the mining industry billions of dollars yearly in replacement costs, equipment downtime and lost production. It’s a constant battle, and one in which victory usually amounts to only a reduction—not elimination—of the problem. It can be attacked on various levels, from the basic materials used in the manufacture of mobile and stationary equipment, or add-on systems that protect vulnerable machinery components, as well as by a design approach that simply presents less opportunity and exposure for abrasive and corrosive impairment.

At the materials level, several specialty steel and wear-material suppliers have recently introduced new or improved products. For example, SSAB said its new Hardox Tube 500 range enables extreme wear resistance on lighter products with a long service life. The new range provides the same hardness and toughness as Hardox wear plate, but in circular form. Hardox Tube 500 was developed to provide a solution for any application where high wear resistance in combination with a lighter product is beneficial, according to the company.

Hardox Tube 500 is suitable for transporting abrasive materials, including ore slurries, and is claimed to be capable of extending a product’s service life by two, five, 10 times or more. It is available from stock in 88.9- to 133-mm diameters and different material thicknesses. Custom tubes in thinner materials and other diameters are also available.

Tata Steel has extended its quenched and tempered Abrazo plate product range with guaranteed impact toughness properties. These products are designed for mining applications, and are available in thicknesses of up to 130 mm. They can be used in wear applications where equipment is used at very low temperatures or where impact toughness is required. Material with guaranteed toughness levels is available as Abrazo 400 and 450, Tata Steel’s wear-resistant plate offering in 400 and 450 Brinell hardness.

Tata Steel said this line of roller-quenched steel has been developed through a close working relationship with its mining and quarrying customers, and the addition of new equipment and processes in one of its European plants has enhanced production capacity as well as capabilities; for example, key parameters like furnace atmosphere now can be accurately controlled, leading to improvements in surface finish. Plant investment also has enabled an increase in finished plate width—up to as much as 3,200 mm on request—meaning larger components can be produced by customers in one piece and manufacturing processes such as nesting are optimized. A wide range of stamping and marking options are available, including new automatic stamping, leading to improved product traceability.

In the bolt-on/weld-on wear products sector, Sandvik released a patented Mechanical Heel Shroud system for loader buckets in underground and surface hard rock mining applications, designed to allow bucket heel shrouds to be changed out quickly and safely without gouging or welding.

Described as a new concept in mechanical wear parts, Sandvik Shark’s Mechanical Heel Shroud (MHS) is claimed to be significantly quicker and safer to change out, resulting in reduced downtime and fewer bucket repairs. Installing the MHS onto a loader bucket—it is adaptable to any brand of loader bucket—requires the one-time fitment of a special base plate, which is designed to last the life of the bucket.

The Mechanical Heel Shrouds are then attached to the base plate using Sandvik’s One Bolt System. This is a simple seven-stage process using standard fitters’ tools, with no welding required. Once installed, wear levels can be visually monitored.

A Sandvik spokesman said the new MHS system is significantly safer than conventional heel shrouds. “Once the initial conversion to the base plate has been done, no welding ‘hot work,’ including permits, is required to change shrouds. And because the MHS locks are accessible from the bucket sides, there is no need to work under the bucket.”

Sandvik said MHS also results in considerable time savings; change out times are improved by about 85%. “Typically to gouge off a set of 14 heel shrouds, prep and weld on 14 replacement shrouds requires two 12-hour shifts,” noted the Sandvik spokesman. “In contrast, to remove and replace 14 Sandvik Shark Mechanical Heel Shrouds takes on average 15 minutes per shroud, or about three and a half hours.”

Change out intervals are also longer due to the high quality SS3000 steel used for the shrouds—the same used on other Sandvik Shark mechanical GET systems.

This results in considerable time savings in bucket maintenance, according to the company; because the mechanical heel shrouds don’t have to be welded, harder material can be used, giving a longer service life and fewer change outs per bucket.

For the left and right hand front positions on the bucket, the new shrouds are available in two versions, a standard and an XL version. The XL has an additional 40 mm of wear material forward of the locking bolt to better handle increased impact and abrasion from side-wall collisions in underground work.

In developing its MHS, Sandvik had to come up with a completely new mechanical attachment system. “Heel shrouds are subject to a unique set of forces from many directions, and so required a different locking mechanism to that used on our Sandvik Shark BPII lip system,” the spokesman said. “However, we did apply the same Sandvik Shark philosophy of designing GET to improve safety and reduce cost-per-ton of production through smart mechanical attachments designed to increase bucket life and reduce downtime.”

Keech, an Australian firm, recently introduced Keeliner, touted to offer longer wear life from increased wear material, despite an overall reduction in product mass, compared with similar liners in the market. The Keeliner system, according to the company, can be used in most applications where protection against abrasion is sought. They can be used in a single unit or placed in a row to cover large areas, and the company can also design custom wear resistance packages to suit specific requirements. The product is intended to be suitable for crushers, ore bins, chute liners, excavator and loader buckets, dump truck trays and a range of other uses. Plates can be manufactured in Keech low alloy steels, Ni-hard iron or high chrome iron.

Keeliner uses a patented Sidelock hammerless locking system—attaching simply to a reusable adapter that can be welded to flat or curved surfaces, or can employ custom adapters.

For some companies, handling materials that slowly degrade equipment is part of the job. Machines that are designed simply and offer less opportunity and exposure to corrosive forces can maintain productivity for producers operating in these applications.

Sylvite, for example, is one of North America’s leading fertilizer distribution companies, dealing in industrial grade fertilizers and commodity fertilizers. The company constantly moves huge amounts of these materials, and in the process, its equipment is subjected to inevitable degradation.

That’s a principal reason why one branch of the company turned to Shandong Lingong Construction Machinery (SDLG) wheel loaders to mitigate the damage. It recently purchased an SDLG LG959 in lieu of a more expensive machine. Pete Marovich, general manager of Sylvite, said the company chose an SDLG wheel loader for its pricing and because of the damaging nature of its work with corrosive chemicals.

With far fewer electronic parts subjected to corrosive material, there is much less damage to the wheel loader. Fewer electronics means fewer computer components and less wiring—essentially, less to be damaged from corrosion. Sylvite said it saved money when it bought the SDLG loader instead of a more expensive machine, and again because that machine requires less repairs and maintenance.

“At first, we were looking at premium wheel loaders, but we…noticed the SDLG machine and its low price, and began to take a hard look at purchasing one,” Marovich said. “The environment the machine works in is very corrosive. We work in a fertilizer warehouse where there is a lot of salt, dust and chemicals that damage machines. Since the SDLG loader has less of the onboard IT, wiring, and electronics that usually become damaged and present problems for us, we decided to try it.”

The LG959 purchased by Sylvite has a 4-yd3 bucket and operating weight of 38,250 lb. Its main features include a Tier 3 Deutz engine rated at 224 hp and 777 lb-ft of torque; ZF transmission and axles; wet disc brakes; a hydraulic quick coupler and third function hydraulics; and an operator-friendly cab.

“We’ve been very pleased with the wheel loader so far,” Marovich said. “Our operator reports the machine is very maneuverable and handling material very well.”

According to SDLG North America, other companies have followed the same line of thinking and purchased SDLG wheel loaders. A North Carolina-based company is using a LG959 to handle corrosive materials that include fertilizer, lime and iron pellets.

Al Quinn, director of SDLG North America, said SDLG wheel loaders are ideal for many industries with specific needs. “The SDLG proposition is that it makes quality wheel loaders at value prices. They don’t have the features of premium machines, which, as shown in the case of the corrosive materials industries, is a major plus,” he said. In fact, we’re finding that SDLG suits the needs of a lot of companies, whether it be ones that don’t need to run machines all day every day or those that are in the market for a used machine but find value in buying a new machine with a great warranty. Others simply need a versatile wheel loader that’s backed by a great dealer network.”

SDLG is a major manufacturer and supplier of earthmoving and construction equipment, based in Linyi, Shandong, China. Founded in 1972, SDLG has, in recent years, expanded into new markets, and claims that during the past four years, it has grown from No. 4 to No. 1 in wheel loader sales with more than 35,000 loaders sold in 2012. It is affiliated with Volvo Group, and in fact Volvo announced in mid-November 2014 that, as part of an ongoing effort to improve profitability and reduce costs, its Volvo Construction Equipment unit would discontinue product development and production of its premium-class backhoe loaders and motor graders in Europe and the Americas and transfer these operations to SDLG. 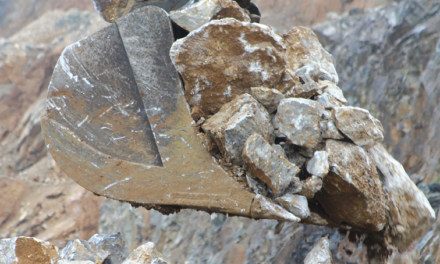