Marcotte Mining Machinery Services, a manufacturer of utility vehicles for underground environments, recently won an award for most innovative cable/hose carrier application in a worldwide competition.

Marcotte, based in Sudbury, Ontario, Canada, said it bested other competitors at the country level of the international Vector awards, organized by Igus, a developer of plastic cable carriers for automated equipment, headquartered in East Providence, Rhode Island, USA.

The Vector awards are offered to recognize those using plastic cable carriers in unique, ground-breaking or unusual applications. The award competition is a joint initiative between Igus and MM MaschinenMarkt. The judges include engineers and scientists representing the ZVEI (German Central Association of Electrical Engineering and Electronics) and RWTH Aachen University. The first competition only accepted submissions from European-based companies, but the contest was opened to entrants worldwide this year, giving North American cable-carrier users the chance to participate for the first time.

Mining applications are particularly challenging for cable carriers, because they involve rock debris and dust. Most mines use booms for replacing overhead suspended equipment and piping. Existing boom designs have hoses hanging between each extending section. This inhibits the functionality of the service platform and leaves hoses at risk of becoming tangled.

To limit the amount of hydraulic hoses hanging underneath the platform, Marcotte designer Ian Martin used an Energy Chain cable carrier from Igus to guide and protect the hoses from the vehicle’s base to the extension boom’s gripper. And because more than one piece of maintenance equipment is typically used when lifting, locating, and fastening overhead equipment and piping in place, Martin improved the functionality of one of his company’s largest utility vehicles, the Multi-RAM, to allow completion of all these actions with just one vehicle, thus minimizing time, manpower, and vehicle emissions. He was awarded the igus grand prize at the Masssmin 2012 conference in June. 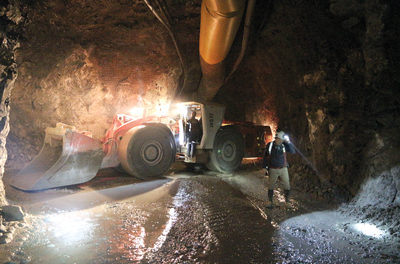 Volvo Penta Power at Pogo is a Golden Combination for Operators

Wear Liners Reduce Downtime, Down Under