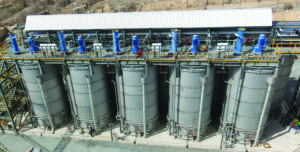 A lab in Randburg, South Africa, will qualify operations for Albion Process. The process is a combination of ultrafine grinding and oxidative leaching. (Photo: Liebherr)

SGS Minerals will offer Albion Process testwork at a lab in Randburg in South Africa, Glencore Technology’s reported. The testwork has also been conducted at the SGS Lakefield lab.

The testwork seeks to qualify an operation for the process.

SGS is the third certified provider of the testwork. Core Resources in Australia and Toms Institute in Russia offer the service.

Albion Process is a combination of ultrafine grinding and oxidative leaching at atmospheric pressure. It tolerates a more variable feed and lower grade, making some projects feasible.