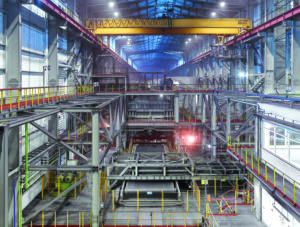 The contract covers the engineering and design of the indurating system, engineering of the process gas fan system, supply of proprietary equipment, instrumentation and control systems, as well as supervisory services and technical training. The core of the plant is Metso Outotec’s traveling grate pellet indurating furnace, which has a grate area of 432 m2.

Metso Outotec said it is the fifth such plant delivered to China. “It is based on our environmentally sound traveling grate technology,” said Tobias Stefan, vice president, ferrous and heat transfer business line, Metso Outotec.

The traveling grate technology produces uniform pellets and ensures high performance and quality with low investment and operating costs, as well as decreased energy consumption and emissions, the company reported.

Pellet production at the Zhong Tian plant is estimated to start by the end of 2021.

Metso Outotec also announced it was restructuring its consumables operations in North America. The company has decided to discontinue its factory operations in North Bay, Canada. The production will be ramped down by the end of the first half of 2021.

Jacobs Tapped for Optimization at Chilean Mine

New Trucks at Mesquite are the First to Display Bucyrus Branding