U.K.-based EA Technology claims the launch of its newest handheld instrument takes a major step ahead in understanding and interpreting the measurement of Partial Discharge (PD), a major cause of failure in high-voltage electrical assets. The UltraTEV Plus2 is the latest generation of PD instruments developed by EA Technology, a global provider of power engineering solutions with expertise in asset management, condition assessment and failure investigation.

PD occurs in and around the insulation material on high-voltage equipment such as cables and switchgear. The discharge is caused by gaps, voids, contamination and defects in the insulation where small “arcs” take place. Once this process starts, it increases and can lead to flashover and failures, so being able to detect partial discharge as early as possible has major safety, financial and security of supply benefits, according to the company.

PD measurements can be difficult due to the sensitivity of the measurement and environmental conditions in the field. According to information on the website Partial Discharge Academy, sponsored by EA Technology, prediction and prevention of PD faults is based on the principle that, once present, damage resulting from PD activity inevitably increases.

Measuring and plotting changes in PD activity makes it possible to predict with a high degree of accuracy when a fault is likely to develop into a failure.

The ability to predict the way in which PD-related faults develop is greatly enhanced by knowledge of how specific assets behave, once the process of deterioration has begun. To obtain the most accurate predictions of failure requires specialized PD measurement instruments, the knowledge to interpret readings, and an extensive database containing details of how specific assets deteriorate over time, in particular applications and environments.

EA Technology said its UltraTEV Plus2 handheld device was designed in accordance with feedback from electrical engineers around the world, which resulted in a major breakthrough for the use of handheld PD instruments. Some of the more important features of the device include:

• Interpretation–The UltraTEV Plus2 tells the operator if the measurements are real PD or just noise or interference.

• Data Capture and Management–The UltraTEV Plus2 can capture measurements and transfer them via Wi-Fi, allowing inspection staff to record data and move on to the next job. The information is then available for experts to analyze; making comparisons, looking for trends and integrating the information into corporate asset management systems.

EA Technology says its UltraTEV instruments are being used to prevent failures of electrical plant in gold mines in Central Asia, South America and South Africa. For example, they are used regularly to test for problems at the Kumtor gold mine, situated 4,000 m high in the remote Tien Shan Mountains of Kyrgyzstan. The company’s PD monitoring equipment also has played a key role in maintaining production at Dubai Aluminum (Dubal), the world’s largest single-site aluminum smelting company. 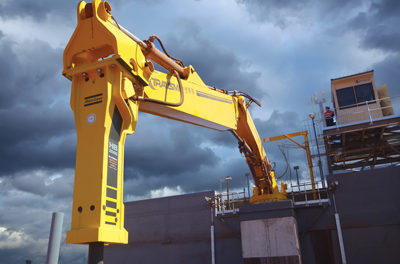