Epiroc reported it relocated its U.S. headquarters from Commerce City to Broomfield in the Denver, Colorado, metropolitan area. The locale is reportedly known as the Rocky Mountain Silicon Valley.

Leadership at Epiroc described the move as natural and true to its mission to deliver world-class automation and interoperability technology solutions. “It is ideal for us to join a community that embodies growth and collaboration,” Jon Torpy, president and general manager, Epiroc USA LLC, said. “The move will only help us become a better partner for our customers.”

The move will also help the company recruit top talent, and to provide better access to amenities and transportation services for that talent, Epiroc reported.

The new headquarters, where 70 employees work, are located at 8001 Arista Place.

In other news, Epiroc reported it completed the divestment of its geotechnical consumables product line, which consists mainly of down-the-hole hammers and related drill bits and casing advancement systems. The line, part of the rock drilling tools division, was sold to Mimir Invest AB, a global investment firm based in Stockholm, Sweden.

Separately, Epiroc reported it won a contract from Codelco for service of mining equipment used at the Andina mine near Santiago. The full-service contract spans seven years and includes on-site Epiroc service technicians to maintain equipment such as the Pit Viper 351 drill rig. Valued at $68 million, it is one of the largest contracts landed by the company’s mining and rock excavation service division.

The company reported it plans to expand one of its main production facilities in Örebro, Sweden, by 10,000 m2. Construction begins this year and is expected to be completed in 2021.

Epiroc also announced it donated a FlexiROC T20 R drill rig to the mining engineering program at Missouri University of Science and Technology. It will be used at the school’s experimental mine. 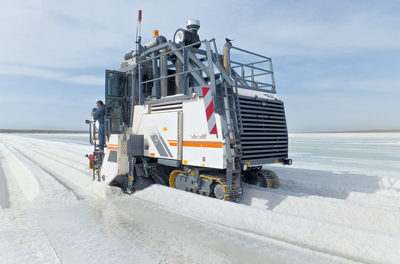 Wirtgen Surface Miner Proves its Worth to Salt Producer