While many underground mines are looking to avoid handheld rock drills for the safety of the miners, there are still many mines in North America, for example, where jackleg drilling is a must. For these narrow-vein mines, located primarily in eastern Canada and throughout Mexico, cabbed jumbos, bolters and long-hole rigs are not feasible due to cost and size restraints, and these operations depend on handheld rock drills—a technology that has changed relatively little in more than 70 years.

In 2010, the Boart Longyear engineering team began to take a hard look at the design of these drills, including their own Secan S-250. The goal was to reduce the noise and vibration the drill puts out. The outcome was a new, top-of-the-line handheld rock drill—the S250-M3—which instantly made jackleg drilling a much safer operation.

Introduced in early 2013 to a receptive market, the S250-M3 represented a major step forward in rock drilling. Reflecting Boart Longyear’s commitment to making a truly better and safer drill, it significantly improved upon the Secan S-250 by introducing advanced noise suppression. The new technology directs more energy to the face of the rock and less into the body of the driller. Independent tests showed the S250-M3 reduced the noise level by 6 decibels—resulting in half the noise—while increasing torque and penetration rates. In fact, one driller commented that it was the first time he could feel his feet and hands after a full shift using a rock drill.

An independent, third-party comparison test at an underground site in the western U.S. pitted the new S250-M3 against three other leading jacklegs head-to-head. After that test—conducted under actual mine conditions—Boart Longyear’s S250-M3 emerged as the evaluation team’s product of choice for rock drilling at the site.

PHQ 250 JHSL pneumatic jacklegs were already being used for the installation of ground support at the site where the comparison testing took place. While a hydraulic rock bolting jumbo had been purchased to help reduce risk to drillers, management determined that handheld drills would still be required in the shafts. Therefore, they wanted to consider alternative products that were reported to reduce exposure to sound and vibration hazards. Selected for testing were the PHQ 250 JHSL, the PHQ250 JHNAVL (a variant with an antivibration buffer on the handle), the Boart Longyear S250-M3 and the Hilti TE MD20 electric jackleg.

Representatives from the various drill suppliers were on hand but did not participate directly in the independent testing, which involved the services of four drillers for four consecutive shifts over two days. Performance data was collected to determine sound production (dBA), vibration (m/s2) and penetration rate. A 185-cfm diesel-powered compressor provided compressed air, and each drill and leg was connected to the same 100 ft length of 1-1/2-in.-diameter air hose to ensure that a consistent volume and pressure of compressed air would be provided to each drill. Air pressure was measured at the drill and recorded for each test. Water for drilling came from a 2-in., high-pressure industrial water line with water pressure reduced from approximately 350 psi to 75 psi with a pressure reducer. Electricity was provided from an existing service at 220 volts.

A Quest Technologies 2100 Sound Level Meter was used to measure sound pressure levels at the driller’s ear. Vibration was measured using an accelerometer that was taped to the drill handle while each driller wore a monitor on his bib overalls.

To ensure that all holes would be drilled in a consistent rock mass, they were all drilled in the same general area. This location also provided for the hardest drilling that would be encountered to provide a worst-case scenario for penetration rates. Each unit was used to drill three holes, varying between 1-3/8 and 1-1/4 in. in diameter and up to 6 ft deep. Holes from the Hilti drill were limited to 2 ft in depth because the Hilti drill didn’t have a drill string longer than 2 ft. Each set of holes was drilled with a new bit, and each pneumatic drill used the same leg so any variations in leg operation would not impact the penetration rates. After each set of holes was drilled, 6-ft, resin-anchored rock-bolts were installed in each hole drilled by the pneumatic drills, but not in the shorter holes sunk with the Hilti drill. The time to complete this installation was measured.

In addition to the recorded performance data, each driller provided evaluations regarding his personal observations of the operation of each drill, including overall ease, noise and vibration.

So what did they think of the various drills they tested? Asked to score various criteria on a five-point scale, the miners ranked the S250-M3 highest overall with 26 points out of a possible 35, and highest for overall ease of use with 18.56 points out of 25. The electric Hilti ranked first for overall noise/vibration with eight out of a possible 10 points and the Boart Longyear drill was close behind with 7.44 points. (See box for the S250-M3’s complete score.)

The evaluation team noted that despite the electric drill’s advantage in terms of sound and vibration rates, its dramatically lower penetration rate compared with the pneumatic drills made it unsuitable for their applications—and they subsequently learned that Hilti would no longer market the TE MD20 drill in North America, eliminating it from further consideration. As a result of the head-to-head testing of the remaining drills—all pneumatic machines—the evaluation team recomended the S250-M3 as its drill of choice for rock drilling.

The S250-M3 comes in three primary variations to match specific customer needs—jackleg, stoper and sinker. The drill hex chuck ends are available in both 22 mm and 25 mm. 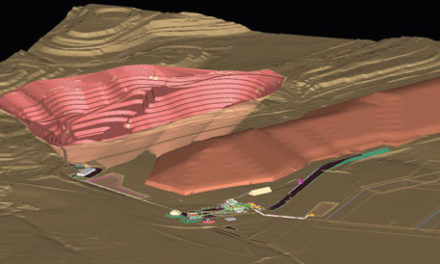